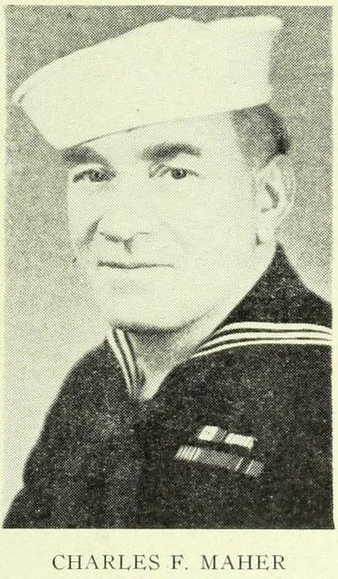 Charles F. Maher was one of many soldiers who engaged in two operations, Operation Torch, and Operation Claymore. However, he wasn’t a soldier, he was a Navy man who didn’t have to run on foot and face danger immediately, he was generally safe on his ship, maintaining the USS Ranger to keep it in tip top shape. Keep in mind that Maher still played an important role in the war. After all, he helped keep an aircraft carrier afloat.

Charles Francis Maher was born in October 23, 1895, in Medford, MA. His dad was Henry P. Maher and his mother was Margaret Harding. He also had one brother named Henry J. Maher. He was one of the older veterans in this project. He grew up in a relatively economically well time as it was right before the roaring 20’s but his childhood was also right in the middle of the progressive era. As a child, he would’ve most likely experienced the gradual improvements of the consumer experience and job safety and witnessed the education opportunities brought to children, and spared of the horrors of child labor. Charles attended school until his third year of high school and set off as a chauffeur for a box factory (a chauffeur at that time was anyone who drove a vehicle for a living, so he was more of a truck driver).  Just as he entered adulthood, World War I broke out and he set off in June 5, 1917 to assist the Allied powers in defeating the Germans. After the war, he witnessed the improvement of women’s lives through the accommodation of immigrant women and being able to see his mother and future wives vote after he came back from World War I. Afterwards, he came back to Medford, became an automobile mechanic, and in 1920, married Sophie in November 8, 1920. Prohibition, one of the last initiatives of the Progressive era , started the year Charles married, so alcohol became hard to come by until a few years into the Great Depression. As Charles moved into his 30's, the Great Depression hit and he lost his job as a mechanic, divorced Sophie and married Emma Gebhardt, and moved on to Springfield. By 1940, he found his new job from the New Deal programs as a sewage worker. On December 8th, 1941 World War II began for the US.

December 7, 1941, Japan surprise attacked Pearl Harbor. It was a major disaster and caught the US completely off guard. The attack was the push that the US needed to get its population in support of the war and the US joined shortly thereafter. Charles registered, and rejoined the battlefield at 1942 as an Aviation Machinist Mate First Class due to his prior job as a mechanic. He was assigned to the USS Ranger, an aircraft carrier that would be used in two key operations: Operation Torch, the invasion of North Africa, and Operation Claymore, the invasion of Norway. In Operation Torch in 1942, the Ranger’s planes successfully sank the Vichy French battleship, Jean Bart. However, the Germans falsely declared that the USS Ranger had been sunk by German U-boats a few months before the boat left. The declaration was false, and the Ranger went to Norway. In Operation Claymore in 1943, the Ranger arrived at the Norwegian port of Bode undetected and launched a surprise attack on the port, heavily crippling German supply lines. After Operation Claymore, the USS Ranger retired to become a training ship in Staten Island for the rest of the war. Charles was discharged from the Navy on February 25, 1945, a day after he saved a dog trapped under five feet of snow.

Because he had survived the war, Charles was able to enjoy the economic benefits that came with World War II. The war brought the US out of the Great Depression, and the demand the war generated caused the US economy to grow massively. The improved economy contributed to the Baby Boom, and as the name suggests, the population exploded with the amount of new people born. Charles was able to retire soon after coming back home due to the GI bill and the improved economy. We do know that a few things have happened to him: In march 1945, he got into a car accident. A milk truck backed into the left side of his car, heavily denting the Coupe, and destroying the door. Charles received several cuts and abrasions around his face and arms. In August 24, 1945, he caught an impressive 6 lb bass!

Charles died in June 26, 1963 at the age of 67. He lived quite a life. He served in both World War I and World War II, showing that he was quite the patriotic man. He helped keep the ship afloat that would destroy a French battleship, and crippled German supply lines. Then, he would go on to operate the training center to teach new recruits how to go the distance in the Asian Theater. It would only make sense that he retired at the age of 50, as he already done a lot to serve his country. He is buried in Oak Grove Cemetery in Medford, where one can still visit him today.