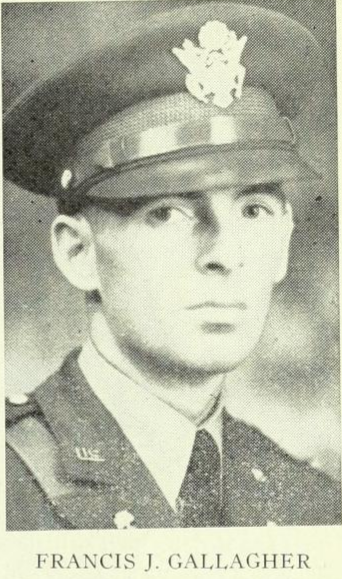 Francis J. Gallagher was born in 1913. He was a World War II veteran who fought bravely in the European Theater. He took part in three major European battles as part of the 26th Infantry Division. His life prior to the war was greatly influenced by the roaring 20s and the Great Depression.
​
During the mid-1910s, the Progressive Era was still going strong with many regulations being passed. The regulation that affected Francis’ family was the anti-trust actions, which broke up Standard Oil Trust into many smaller entities, like the Socony station in town (Standard Oil Co. New York). Another important Progressive issue was women's right to vote. Although Francis was too young to remember when the 19th amendment was put into effect, his family definitely felt its effects, as his mother was now able to vote and take an equal part in society, a drastic change for Americans nationwide.

In addition, Francis’s world was definitely affected by the Temperance movement that banned alcohol in 1920-1933. Prohibition led to the creation of the bootlegging industry, where organized crime rings made tons of money by selling bootlegged liquor. Perhaps Fancis has heard rumors about speakeasies in town, like the Mansion Inn on Dudley Pond.  During the midst of prohibition, the U.S. economy experienced significant growth. Stories circulated about people getting rich by putting money in the stock market, so naturally, others followed suit. Investor optimism led to more and more people taking out bank loans in order to achieve the ultimate goal of wealth. People started to realize that a massive bubble had been created, causing many companies to be overvalued. There was no one thing that kicked off the Great Depression, but as a result of financial havoc, on October 29th, 1929, the entire American financial system came crashing down.

While these historic events were taking place, the Gallagher family of Cochituate made their way through everyday life. Francis’ parents were both born in Ireland and they immigrated to America in the early 1900s. In 1930, when Francis was going through primary school, his dad worked as a stationary engineer, which meant he fixed and operated boilers. As a result, Francis’ dad was bringing in a stable salary, as he was the average working American.

Every person in America, and in most developed parts of the world, felt the effects of the Great Depression. Some people were left penniless and forced into living paycheck to paycheck. It is likely that Francis and his family felt the pressures of these hard times. It is around this time when Franklin Delano Roosevelt became a household name and shifted American attitudes.

When FDR entered the White House, few would’ve thought that he would become one of America’s most important Presidents. But after FDR’s first fireside chat, where he encouraged people to help save the banks, he became a beloved man. It is likely that Francis would’ve listened to FDR’s fireside chats with his family, looked up to FDR, and saw him as a hero. As the Depression continued, FDR created several successful social programs in “The New Deal” that helped to rebuild the economy through labor recruitment. These programs included the CCC (Civilian Conservation Corps) and the WPA (Works Progress Administration). Even though Francis was too young to join the CCC, there is no doubt that he would’ve heard about it and its influence across America. Indeed, the WPA had a strong presence in Wayland, which included the construction of a brand new high school in 1935.

Further, In 1940, Francis worked as a filling station attendant. He was 27 years old and was living with his parents at 7 Pleasant St., but he was making slightly more money than his dad, who at the time as working in a shoe factory.

Taking his passions elsewhere, Francis enlisted in the US national guard on January 16th, 1941 in the ordinance department, nearly a full year before the Pearl Harbor attack. There, he worked up the ranks to become a Captain. Francis also had two brothers that served in Europe during World War II. Several months after Francis began his training, the Japanese bombed Pearl Harbor on December 7th, 1941, and upon hearing the news, it is safe to assume that Francis was both shocked and angry. With fire lit inside of him, he transferred into the 26th Infantry Division and was shipped off to England.

Francis stayed in England for 11 months. Here, he mostly worked on developing waterproofing technology for the Allied troops. At this point in the war, France had been seized by the Nazis and London was experiencing the Blitz (nightly bombings that left the city leveled). Even though Francis wasn’t in the city, he knew of the ongoing Blitz and was probably anxious about the possibility of his base being bombed.

On June 6th, 1944 the Allies stormed the beaches of Normandy, opening up another front for the Nazis to defend. Francis participated in this northern front, fighting in battles to liberate Northern France. He continued to march with the Allied troops from Paris to the Rhineland, where he fought bravely to free France.

The climax of his military experience took him to Germany. In the forest of Ardennes, Germany, Nazi troops went for their last major offensive push in the Battle of the Bulge. The Allies had been tearing through Western Europe but with a recently slowing momentum, the Nazis took this as a chance to push back. The Germans caught the Allies by surprise, breaking their lines and throwing off the entire supply chain. Throughout the course of the battle, 75,000 Allies and 120,000 Nazis died.

After the Battle of the Bulge, Francis continued through to Central Germany, where they fought the Nazis and finally put an end to their control. Through a few battles, the Allies fought hard and completely destroyed the Nazis. These battles ended in Berlin, where the German army fought to the bitter end to avoid having their main city captured. But the Soviet Red Army took the city in April, 1945.
​
At the end of the war, Francis had the impressive rank of Lt. Col., which is a significant rank in the Army. After fighting the Nazis in several major battles, Francis earned awards in American Defense, American Theater, European Theater of Operations ribbons. He also earned four campaign stars, a Meritorious Unit Citation, and the Victory Medal. On top of these significant military accomplishments, there is no doubt that Francis was ecstatic that the fighting was finally over. Francis was released from active duty on March 21st, 1946. However, like most soldiers from WWII, Francis must have had a hard time forgetting the horrors he saw in Europe, and they would likely never leave him.

A year after returning home, Francis married Mary Gruppose on August 5th, 1946.1 He later worked at Dennison Manufacturing in Framingham. Francis died on January 17th, 2002 after living an accomplished life that should never be forgotten. He now rests at the Massachusetts Veterans Cemetery in Bourne.