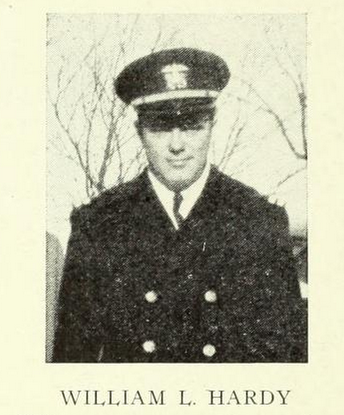 William L. Hardy lived a life on the move. After his birth on January 22, 1918, his family traveled around the country. They eventually settled on 42 Main Street in Wayland Massachusetts, where William’s formal schooling began. He graduated from Northeastern University in 1938 and enlisted in the United States Navy in July of 1940. He was a midshipman when assigned to The USS Arkansas as a line officer. As he voyaged the Atlantic and Pacific Oceans, he was assigned to work on destroyer duty as well.

The United States had just concluded its final battles of World War I when Hardy was born in San Francisco. His father, William Hardy Sr., had recently closed his service in WWI. Hardy grew up with three siblings: Grace, Henry, Alexander, and Robert. Through the majority of his childhood, Hardy lived in Wayland, Massachusetts. While growing up, William’s friends referred to him as Billy, which he preferred to William. During Hardy's education in elementary school, the U.S. faced the frontier of The Great Depression. Cities and towns in and around New England were key to the American economy, so it is likely that the Great Depression hurt Wayland and surrounding towns. The crisis probably impacted Hardy and his parents negatively, as William’s father was employed by the local bank through the 1920’s and 30’s. Even if the Hardy family was well off financially, they were most likely not immune to the effects of the Great Depression, particularly if most of their income was earned through a job in the banking system that crashed. The Great Depression hit agricultural sectors in the Midwest much more harshly than it did the Northeast, but the Northeast depended on Midwestern food products, so it was hurt as well. Given that Hardy was a young boy growing up in the 1920s, many aspects of his development were influenced by the culture surrounding the Depression. The toys of the time often resembled a standard of work for the ideal boy. Perhaps William found entertainment in toys such as “Dad’s Big Farm,” a toy that encouraged agricultural ideals, much like the famed authentic miniature Sears machinery set. Hardy attended high school through the worst years of the Great Depression and graduated from Wayland High School in 1938. He made his way to Northeastern University to attain a masters degree in civil engineering the year before the Depression ended. In college, Hardy played football, was elected class treasurer, joined the class dance and senior week committees and the Cauldron junior staff, played in the band and orchestra, and took part in a fraternity.

In 1940, after one year of training, Hardy began his service and eventually entered the war. He started his service as a midshipman, an officer of the most junior rank. In 1941, after Pearl Harbor was attacked, Hardy was assigned to The USS Arkansas. The USS Arkansas was a dreadnought battleship built by the United States Navy in 1910, and the Arkansas served in both World Wars. William Hardy Sr. also served on The USS Arkansas 35 years prior to his son. During interwar years, battleships trained midshipmen, so it is possible that William had experience on a similar ship before the Arkansas. Hardy first worked on The USS Arkansas as a line officer. In the World War II Navy, a line officer was a warrant officer who enforced the general command. The line officer title indicated that an officer was eligible to command tactical and combat units. This is probably what qualified Hardy for destroyer duty after serving on The USS Arkansas. Officers who were not line officers were in charge of keeping noncombatant units in order. It is surprising that Hardy did end up serving as a line officer, since a common place for non-line officers to work was in civil engineering, Hardy’s great interest in high school and college. While serving in the US Navy, Hardy also worked on what was described as “destroyer duty” in the Atlantic and Pacific, so he must have left the Arkansas and joined a destroyer crew. Generally, destroyers were much smaller ships equipped to attack submarines and aircraft. Starting on August 7th, 1941, the Arkansas began its patrol in the mid-Atlantic. On January 20, 1945, the ship departed California for Pearl Harbor in preparation for the occupation and attack of Iwo Jima. These could be where Hardy earned his Pacific and Atlantic badges.

Hardy was officially put into inactive duty as a Lt. Commander on The USS Dover on December 15th, 1945. He received his American, European, Pacific, and Pre-Pearl Harbor ribbons. Ribbons were granted to personnel who served a minimum of one year of consecutive duty between December 7, 1941, and March 2, 1946, within the respective borders of their service. Once Hardy completed his service, he expressed interest in becoming an industrial consultant, someone who specializes in the design or improvement of the operation processes of an industry.

Before the attack on Pearl Harbor in 1941, 23-year-old Hardy was married in Virginia as he prepared for the voyage of The USS Arkansas. Upon Hardy's arrival back home from the war, he moved his entire family across the country to Los Angeles, California. Soon after their arrival in the city, he met a woman named Patricia Paulin. After trying to balance an alternate life with his new lover, he made the decision to divorce his wife Bertha and leave his children. Hardy and Patricia J. Pollon officially got married in 1973 in Santa Barbara, CA. Hardy lived out the rest of his life in Los Angeles until he died in 1979. Hardy’s first wife, Bertha Brunner, outlived him until her passing in 1994 in San Diego.
​
William L. Hardy lived his life through the tumultuous times of the Great Depression and World War II. Extensive travel during the war further acclimated him to change. Like his father, he was fortunate enough to live on after the war. Hardy's patriotism seems to be hereditary, given his contributions during World War II.