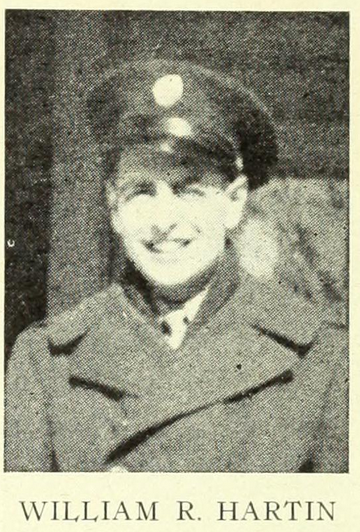 William R. Hartin was a true patriot. Despite difficult economic opportunities, Hartin persevered through school, got a job to support his family, and joined the Army to defend his beliefs. For William’s enlistment into the Army prior to the attack on Pearl Harbor, he received Pre-Pearl Harbor Medal. When he shipped to the war shattered Europe, he and his unit served extraordinarily in helping to defeat the Axis Powers, receiving several medals along the way. William Hartin’s years of service for the United States show that dedication and passion make a true difference in life.

William R. Hartin was born to Joseph and Marguerite Hartin in 1920, the very start of the prosperous decade for the United States known as the roaring 20’s. The Hartin family most likely enjoyed the new consumer age of the 20’s due to the U.S.’s improving economy. Bill's mother, Marguerite Hartin, along with many women at the time, were likely affected by the “New Woman” mentality, which allowed her to be more free and open about her thoughts in a new time of Women’s Suffrage. In 1920, perhaps she exercised her right to vote in the 1920 election where Republican Warren Harding defeated Democrat James Cox in a landslide.

During the 1920’s there is no mention of Bill's father, Joseph, so most likely,  Marguerite was tasked with independently raising Bill, along with his brother Francis and sister Marguerite. Furthermore, Marguerite also did not have a job so it is unclear how she and her family survived through the economic hardships of the Great Depression in the 1930’s. Even when Joseph Hartin appears in the census he is unemployed, it is possible that Joseph could have been sick and unable to work. However, as William and Francis grew older, they both worked as bookkeepers in the town in order to provide for the family.

Bill completed his high school education and enlisted into the Army in the 1939, before the draft was established. Along with most of the country, Bill was surely aware of the growing threat that Germany posed to the free world. In 1939, Hitler and his forces invaded the recently independent nation of Poland. With increasing global tension because of Axis Power expansion, Bill likely felt a desire for justice and believed that serving in the U.S. Army was the best way to ensure it. Bill was sent to Fort Rosecrans where he trained with the Battery “B” 19th Coastal Artillery. Fort Rosecrans, now known as Naval Base Point Loma, in San Diego, California, garrisoned and trained solely the 19th Coast Artillery Regiment. After the Pearl Harbor attack, Hartin was surely preparing for a potential Japanese mainland invasion. For this accomplishment, Hartin later received the American Theater Ribbon. However, because of the Germany-first policy, Hartin and his regiment were shipped east to the European Theater to help combat the Nazis.

His regiment was introduced to the European theater after leaving from the Boston. Because of his involvement in an artillery regiment Bill probably wouldn't have been involved in the D-day invasion on June 6, 1944. However, from Normandy his regiment traveled to Northern France, Central Europe, and the Ardennes, where the Battle of the Bulge occurred. The Battle of the Bulge was a surprise counter-attack launched by the last of Germany’s army in December of 1944 in an attempt to capture the city of Antwerp and divide the Allied forces in northern France. For his bravery in combat, Bill Hartin received medals including the European-African-Middle Eastern Campaign (EAMC) medal for his service in the European Theater. On the EAMC he received 5 stars, indicating that he been involved in 5 battles. As Hartin traveled through much of Northern France and into Germany, it is possible he was involved in some serious fighting as the Allies pushed against the depleted Nazi forces. For example, Hartin’s unit received the distinguished unit citation also known as the Presidential Unit Citation. We couldn't uncover the specific reason why the unit received the citation, but since they had been involved in the Battle of the Bulge we theorize that this is the explanation. To receive this medal, the unit must have shown extraordinary heroism and displayed such gallantry, determination, and morale in completing their mission under extremely dangerous conditions as to set them apart from other units in the campaign.

Hartin received the Army of Occupation Ribbon as well, which was awarded to those who served in the occupying forces in Europe or Japan. He was in the European Civil Affairs Regiment which dealt with civilians throughout the war. The Allies knew that in order to ensure victory the military must work with the civilians to help them to reestablish their local and national governments. Britain convinced the U.S. not to give too much power to civilians during wartime, so it remained in the military's purview.  Civil Affairs also assisted with the reconstruction of Europe’s infrastructure. For the most part the civil affairs divisions ran the local governments until they were stable enough to ensure law and order.

In addition to this ribbon, Bill also received the Good conduct with clasp, awarded to only those who have served for more than three years in the military after August of 1940. A clasp is given instead of a medal if a soldier deserves to be honored with another Good Conduct Medal, awarded to a distinguished soldier who shows exemplary conduct, efficiency, and fidelity throughout their active military service. Bill might have earned this medal from the way he treated or helped civilians Europe.

In 1945, Hartin was involved in the occupation of Germany. At the same time, his brother, Francis Hartin, a metalsmith repairman in the U.S. Navy reserve, wrote from Hawaii to Wayland that he was doing alright. Similarly, in the Cochituate Jeep, Marguerite’s daughter, Carylle Louis Trydell, picked a paper out of a jar with Frank Hartin's name on it, meaning that he had just won a war bond. By the end of 1945 or early 1946, William Hartin was discharged from the Army ranked at Master Sergeant. Hartin returned to the States and moved to Rockford, Illinois, where he started a family.

William Hartin’s commitment to his country can stand as a model to many Americans. When he saw injustice, violations of human rights, and a potential threat to the American way of life, he enlisted himself into the Army. Bill chose to put himself in harm's way, placing the country before himself. When the war came, he and his unit performed exceptionally, serving as role models to other units. He survived WWII, subsequently earning himself prestigious awards and being promoted to Master Sergeant. William Hartin exemplifies the hardworking, patriotic, selfless, American that all Americans should honor. He, along with all of the men and women that served in defending freedom and democracy in WWII, should be remembered as truly the greatest generation.