“I mean, they say you die twice. One time when you stop breathing and a second time, a bit later on, when somebody says your name for the last time.”
-Banksy 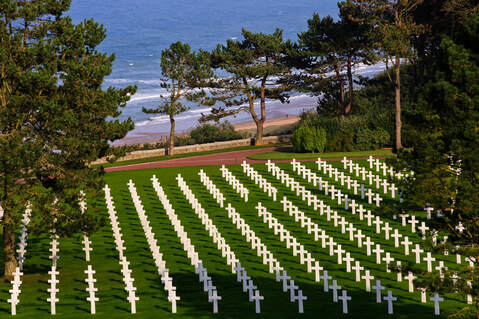 Actually as I write, the very last survivors of the D-Day invasion, exactly 75 years ago on June 6th, 1944, sit at the Normandy American Cemetery, universally indicating that this day will be their final visit. Now in their 90's, these survivors braved the unimaginable onslaught, signaling the beginning of the end of the world's most devastating and important conflict. Now, especially as a troubling form of nationalism besets many of that era's same warring countries, it is fitting and proper to recognize the efforts of the original anti-fascists who truly saved the world for democracy.

In the spring of 2019, 45 juniors, composing the most recent Wayland High School History Project team, delved into the war years by researching and writing more than 40 short biographies of Wayland's men and women who served. A mere fraction of the entire Honor Roll of soldiers, we focus on Cochituate, then the working class side of town and where home front townsmen published a monthly journal they dubbed The Cochituate Jeep, "Conveyor of News From The Folks At Home To Their Service Men And Women Everywhere."  Who were those "Service Men and Women Everywhere" and how did they, as the proverbial "kids next door", end up contributing in great ways and small to the war effort?

Read on and consider the stories pieced together by young people who live in some of the very same homes that their 40's counterparts departed so many decades back, whose collective efforts demonstrate how democracy's survival is not inevitable and at times requires the blood of patriots to ensure that humankind's most savage elements do not prevail.