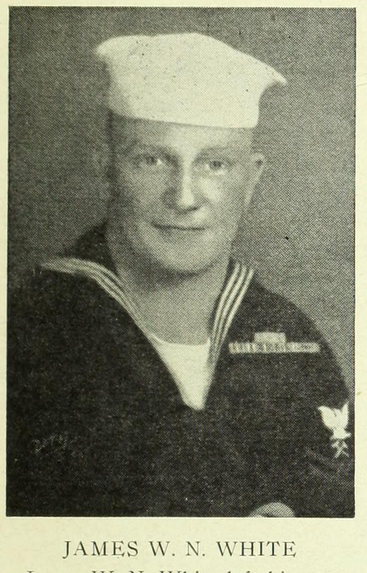 James William Nicholas White was a World War II sailor whose occupation was a shipfitter’s striker and embarked from New York to fight in North Africa, Philippines, Iwo Jima, Okinawa, Japan, Gilbert Islands, Marshall Islands, Guam, Saipan, and New Guinea. How did this small town boy become a patriotic and selfless seaman that partook in several battles during World War II? What exactly led James down this path?

James White was born on August 18th, 1918 in Wayland, MA. He lived on 81 Ice House Road, which currently is in between Boston Post and Pelham Island Road, across from Wayland’s present-day fire department. Besides James’s brother, Carl N. White, James was surrounded and supported by both his mother and father. His father, Frank N. White, was born in Massachusetts, the son of European immigrants. James’s grandmother was born in Denmark, and his grandfather was born in Germany. James’ father, Frank, was a veteran in his early life, but later became a packer at a biscuit factory. Frank’s mother, Emma J. White, married Frank at 20 years old, 8 years younger than her groom, and worked as a stitcher at a dress factory. Emma’s mother was from Massachusetts, and her father from Canada. It seems likely that when women, including James's mother, finally got the right to vote in 1920, they were emboldened as citizens.  During the 1920s, there were a lot of “firsts” for women in America, which James fortunately witnessed. Although there were two working parents in the White household, the Whites were far from rich, for the parents didn’t seem to bring in much money. Although, the Whites always seemed to be stable, for they rented their house in Wayland for years, at the price of $15. Throughout the 20s, there was a disparity of wealth in Wayland, home values ranged in the thousands, while others were around $20 to $30. Using this information, it can be inferred that the White’s did not have as much money as other families in Wayland. During his time in Wayland, James had the opportunity to attend the Cochituate School, allowing him to learn how to read and write. In school James thrived, he was an excellent student who too his place on the Honor Roll. While James was growing up in the 1920s, the United States was recovering from World War I and going through immense political, social, and economic change. Although the U.S. faced both positive and negative results from World War I, ten years later it would get really bad, when the Great Depression struck, a worldwide economic gloom that devastated the U.S. economy. While James was maturing, his family was suffering the repercussions of the Depression along with millions of others around the world.

By the late 1930's, James decided to launch a new career and take up the job of becoming a nurseryman, a worker or owner in a plant nursery. In his late teenage years, James decided to sell plants and trees to make some money to either save, or contribute to the family, while entering adulthood. James’ small business in Wayland didn’t last longer than a few years, for Germany attacked Poland, leading Britain and France to declare war on Germany. James felt compelled to enlist in the armed forces, possibly foreseeing the war ahead. James enlisted into the U.S. Navy on June 24, 1940, right after Italy, under Mussolini's regime, had just entered the war. James’ was first assigned to the USS Kearney as a shipfitter’s striker, the task of being an apprentice metal worker on a Naval ship. Throughout the long hours on the boat, James was in charge of making sure that the ship ran smoothly and that there were no issues on board. James completed his basic training and departed from New York harbor around late 1940, launching the campaign where he would partake in several battles during World War II, earning numerous medals and recognition for his valor, participation and bravery along the way. Before Pearl Harbor took place, James was aboard the USS Kearny when the ship was famously torpedoed on October 16th, 1941. The ship was struck by the German navy, even though the U.S. hadn’t entered the war yet. Eleven men died in the attack, leading President Roosevelt to state that Hitler just wanted to frighten America. James was then transferred to the USS South Dakota, also known as "Battleship X", in May 1941, working again as a shipfitter’s striker. The USS South Dakota would later participate in both the battles of Iwo Jima and Okinawa, the Gilbert and Marshall Islands campaigns and other smaller battles.

On December 7th, 1941, Pearl Harbor was attacked by Japan bombers, forcing the United States into WWII. James White battled for his country during World War II. After Pearl Harbor he traveled across the Atlantic and helped with the North Africa Campaign on November 8th, 1942. The US troops, along with the British troops, traveled to both Algeria and Morocco in North Africa to invade, advancing to Tunisia to begin the Tunisian Campaign. These battles led the Allies to take hundreds of thousands of Axis soldiers as prisoners. These battles were regarded as wins for the Allies and allowed James and his unit to continue to fight into Europe.  A little less than two years later on October 20th, 1944, James sailed with the Navy to the Philippines. The Battle of the Philippines began when the Japanese attempted to invade, but the U.S. defended the group of islands. The Allied troops fought back and freed the islands from Japanese control in an invasion soon after. Soon after, James participated in a famous battle, the battle of Iwo Jima, the bloodiest battle of WWII. The U.S. Navy used naval gunfire against the Japanese controlled island of Iwo Jima, which lasted over nine months. This battle was the first major battle during World War II to take place on Japanese territory. This major battle between the U.S and the Japanese led to the eventual capture of the island from the Japanese Army. James was a part of this momentous occasion, for he was an important part in a historic battle.

A few months later, the Battle of Okinawa took place from April to June of 1945. During the battle, over twenty American ships were sunk and 157 were damaged by the enemy. There were thousands of casualties on both sides of the battle, and the Japanese had lost more than 1,100 planes to the Allied naval force. After three months of fighting, the Allies conquered and occupied Okinawa, the last major battle of World War II.

James White participated in multiple battles during World War II, he fought for his country, and defended his nation. Because of James’s hard work, he was awarded multiple honors, including the Pre-Pearl Harbor ribbon, the American Theater ribbon, the European Theatre ribbon with one star, the Pacific ribbon with eight stars, and the Philippine Liberation ribbon with two stars. James decided that after he was discharged from the Navy, he would take up deep sea diving as a new occupation and hobby. Years after his participation, James met his spouse, Frances Fulford. James and Frances married when James was 45 years old, in 1963. Frances was born in 1917, in Beaufort, North Carolina, the daughter of J. Wesley Dudley and Funnie R. Dudley. Her occupation was a stenographer, a person whose job is to transcribe speech in shorthand, working 52 weeks in the year. The couple were happily married until James passed away in February 1996, and was buried at the Vine Lake Cemetery, in Medfield, Massachusetts.
​
James William Nicholas White was a brave man who like so many of his generation stepped-up and fought for his country; an everyman and patriot.