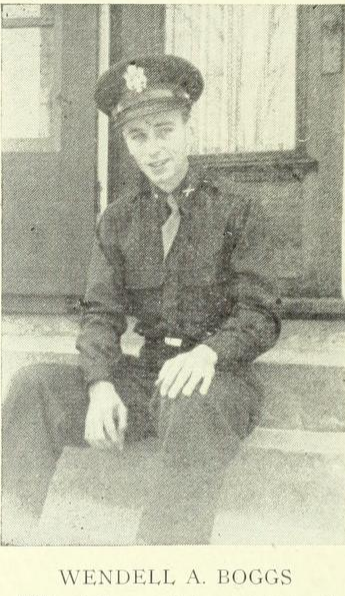 Wendell Boggs was born in December 18, 1919 in Marlborough, Massachusetts. At a young age Wendell enlisted and called upon to join World War II, the bloodiest war that the human race has ever experienced. Although only one man, Wendell contributed greatly to the war and his tells the story of many veterans who volunteered their lives for the protection of their country. Wendell Boggs, a part of the 91st infantry, saw a gruesome war in Italy, brought home horrors yet never shared them, and post-war started a family where he would pass down his legacy.

Wendell Boggs was born into a world where there was at last peace after the ending of World War I. During Wendell’s early years, across the world a series of conferences would soon be held and lead to the foundation of the Treaty of Versailles and the League of Nations. The punishment for the losing European powers would leave these countries, especially Germany, with a large deficit. This pain would lead to the eventual rise of Fascist states just a decade or so later. The same year as Wendell’s 1919 birth, the German Workers Party was created and Benito Mussolini established the Italian Fascist party. This early version of the Italian Fascist party would later play a large roll in Wendell’s life as it will be the location where he would be deployed during the war.

Wendell’s parents, Pearl E. Boggs (1894) Willard O. Boggs (1888) raised Wendell on Chestnut St. in Marlborough, MA. In the 1920’s, Pearl and Willard worked at the Howe Shoe Factory, where he was a stockman and she as a stenographer.  Wendell had one younger brother, John (1921), who remained a Marlborough native his whole life.  Wendell grew up in a world in which a large number of men served in World War I. During his early childhood, Wendell was surely exposed to America’s post-war recovery. The country was changing, as it was the tail-end of the Progressive Era and the outset of the Roaring 20’s when Women’s suffrage and prohibition debuted, and across the Atlantic Hitler began his to rise to power. Although these are significant historical events, as a child Wendell most likely did not notice the drastic changes that were happening in not only America but also his own home. The 1920’s era would come to an end in October 1929 when the stock market famously crashed leading to the Great Depression.

Wendell, now starting his teen years, was surely more aware of worldwide events. The Great Depression would affect Wendell’s country, community, and home. Wendell’s father switched jobs during the Depression from working at Howe’s Shoe to owning and working on a farm. However, according to the 1930’s census, the family farm produced $0 worth of income. Wendell’s family must have taken this lost source of money flow very seriously and reduce their family amount of spending. Their family still had a source of income, however, as Wendell’s mother was still employed at the shoe factory. During the 1930’s Wendell would continue his high school education in Marlborough until he would apply and attend college. Around 1937 he enrolled into Massachusetts College of Pharmacy where he remained for four years and graduated around 1940. After college Wendell moved to 12 Pemberton Road in 1940 where he boarded at a house with other young students as he began to work at Ben Johnson’s Pharmacy in Cochituate center.  When living in Cochituate he met his future wife, Helen Gage (Houghton) Boggs, a Natick native born on February 24, 1922. Very soon Wendell’s life would change drastically.

Wendell was 22 and a college graduate when the US was unexpectedly attacked at Pearl Harbor. This event would alter the country and Wendell’s life as a young man. Young men all across America volunteered or were drafted into the bloodiest war in America’s history. Wendell decided to give his knowledge to his country. He was soon drafted into the Army on May 2nd, 1942 into the medical corps where he remained for a short period of time. Wendell began his training in Georgia along with 35,000 other men at Fort Benning. He also trained in Camp Davis in North Carolina and Camp Lee in Virginia. Training could not have possibly prepared him for what he would see later in the bloody front lines.

Wendell would ship out on his journey where he would join many different sectors of the Army despite his initial assignment. Early on he was moved from the medical corps to an anti-aircraft company and then again transferred to the infantry as a platoon leader with the 91st Infantry Division. When Wendell was assigned as platoon leader, the 91st Infantry had already traveled throughout North Africa and into the “soft belly” of Europe and into Southern Italy. Wendell joined other troops as a platoon leader when the infantry was already north of Rome at the Rome-Arno border. At the fighting of Rome-Arno it is likely that Wendell contributed to the conflicts along the Gustav Line on 22 January. This unsuccessful effort by the US Army is when infantry failed to push through the border after bombers had endeavored to open the line at Monte Cassino.  Eventually after Allied air power was called to the conflict, by June, the US had taken over Rome and created a new defense line established through Rome and the Arno River.

According to his son, Wendell never talked about his experience with the 91st Infantry to his wife or children when he returned. However he would tell only one comment about his fighting when asked: That “he walked from the gates of Rome to the Czech border”.  It is likely that Wendell thought war stories were not meant to be shared with family but meant to be kept inside. Maybe that was his coping mechanism. Wendell received many acknowledgements such as Combat Infantryman’s Badge, European - North African - Middle East service medal, American Service Medal, Victory Medal, and lastly the Purple Heart recipient for his fighting in Italy. Wendell was honorably discharged on February 13th, 1946 with rank of 1st Lt.

Although the war was a large part of of Wendell’s young adulthood, it did not define who Wendell Boggs was. Post-war, he came home in uniform without any stories or painful memories to share, only few a comments that disapproved of war. He kept them all to himself. He possibly would peek into these horrid times with other soldiers, but Wendell was ready to move on from the war. Wendell did not stay in touch with any friends from the war, but instead Wendell was ready to restart. When he came home, he was already married to his wife Helen with whom he had a son, Wendell Boggs II who was born in 1944. After the war, Wendell and his family moved into one of the new houses on West Plain Street in Wayland. where they lived for about ten years and had two more children, Jeffery and Gary. Wendell raised his children in Wayland and enjoyed the nearby local town beach where his kids would go swimming during the summer. Wendell savored Wayland until he decided to move his family when he bought a drug store in Saugus around 1965, where he worked for 25 years until he retired in 1990. Wendell was very involved with his community in many different aspects. Throughout his life was also recognized for the following:
​
Wendell was a decorated and respected soldier, yet that is not the only aspect that composes Wendell's legacy. Wendell continued to pursue his passion as a pharmacist despite the hardship of war that he faced as a young man. He saw the ugliness of war that no human should ever see. World War II veterans are known “Greatest Generation”, and Wendell Boggs truly represents this label as he gave back to his country, community, and family.  Wendell was a father who truly loved his wife and children and wished to give them the best life possible. Wendell died on July 13, 2002 at age 83 in Gilford, New Hampshire and is buried in Lakeview Cemetery in Wayland, Massachusetts.  Many thanks to Wendell’s son, Wendell Boggs II for sharing information about his father's life.