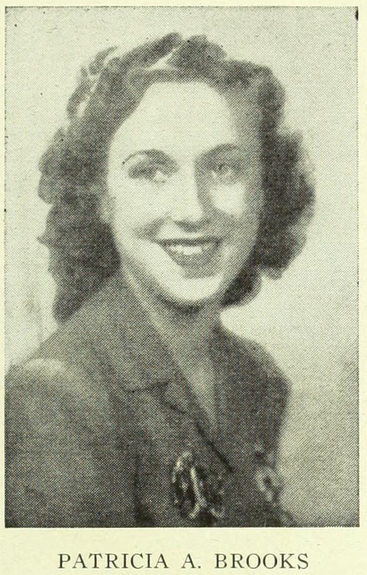 In the first half of the 1900s, Patricia Ann Brooks was among the most progressive and patriotic women in Wayland, Massachusetts. She was born into the roaring 1920s when the jazz age was at its peak, the stock market was booming, and electricity was first being introduced. The country was on the up and everyone knew it. At the same time, strict gender norms still existed for women. Patricia was forced to overcome the typical gender expectations placed upon girls in order to achieve her goals, as girls were expected to care mostly about their appearance and dutifully complete household chores. Her family and childhood were surely affected by the nationwide Great Depression and the presidency of Franklin Delano Roosevelt. As the war years progresses, she fearlessly joined the U.S. Marine Corps to contribute to the destruction of the Axis powers in World War II. Patricia’s life was rich and fulfilling, and it is important to our learning that her story is remembered.

Patricia Ann Brooks was born on October 15, 1924, in Brattleboro, Vermont. At the same time, fascism was just starting to spread in Europe with Mussolini gaining power in Italy. Her loving parents, William A. Brooks and Ruth Brooks, took great care of her and raised to her to be a noble and selfless woman. She had no known siblings. Her father was born in Canada and likely immigrated to the United States at some point early in his life. His job as a corporal in the Air Force for WWI may have been an inspiration for Patricia to join WWII as well; she wanted to follow in her father’s footsteps and make an impact on her country. In addition, her mother was born in rural Vermont just like her. They all lived in Brattleboro until she was about 11 years old when they moved to Wayland in 1940 residing in a rented house on 100 Fairfield Road. This hinted that they either did not know if they wanted to stay in Wayland or at this specific house, which parallels to the unsteady American economy at the time. The Great Depression is a potential explanation for their relocation for it might have offered a better financial situation for their family. Her father got a job as an auto repairman, a respectable job, and he made enough to support his family and their endeavors, including Patricia’s enrollment at the brand new Wayland High School, built with New Deal WPA funds, when she was 15. Later in Patricia’s teen years, the family moved to Ridgefield Road in Wayland and officially bought the house. After working diligently in school, she made the honor roll and graduated from Wayland High School in 1942.

Afterward, Patricia decided to join the Women’s Marine Corps on March 22nd, 1945. Being the first woman in Wayland to join this program, she defied many different gender norms, as girls were expected to focus on tasks like crafts and cooking. The hands-on, grueling work was intended for the men.

Patricia’s parents were most likely afraid of her going to a war zone, but since her father was a seasoned war veteran, she was likely encouraged to do her part. She received her basic training at Camp LeJeune in Jacksonville, North Carolina. This facility was where men practiced the missions of seizure and defense of naval bases, security for the ships and shore stations of the Navy, and developing amphibious warfare tactics, techniques, and equipment employed by landing forces. Patricia's experiences did include combat training, but was surely less rigorous given their non-combat roles. After her training, in 1945, she was stationed at Cherry Point, North Carolina as a Private.  In 1945, she earned her Corporal’s stripes; a signifier of a higher ranking in the Marines and a certain source of honor.

When Patricia arrived home from the war, she bought a house on Pemberton Road. Later, in 1948, she married August Fonseca. Fonseca was a 1st Sergeant in the 7th Division of the Pacific Theater and in Korea, so they likely met during the war. The couple lived a peaceful life after the war, having their first child on September 8, 1954: Mark Stephen Fonseca. Then in 1960, the family moved to 32 Winthrop Road in Taunton. The motives of this move are also unclear, but it could have been for August’s work or other unknown reasons. In Taunton, Fonseca worked as a driver and made enough money so they could eventually retire. At some point later in life, they moved to 107 Live Oak Road, Beaufort, North Carolina, a popular retirement location. Sadly, Patricia passed away in their North Carolina residence on January 25, 2005, at the age of 80. She is buried at Coastal Carolina State Veterans Cemetery in Jacksonville, North Carolina alongside her husband.

Patricia lived an inspiring life that teaches us all an important lesson: do not let society’s norms hold you back from what you want. Even if there were some gaps in her story that we cannot recover, her commitment shined through continuously. Patricia did not live in fear; she went after what she wanted and she paved the way for many other women in America. She was able to show us how joining the military is a fulfilling life course for both men and women. In conclusion, Patricia’s life posed many different obstacles (including those associated with the Great Depression and the oppression of women). However, the inevitable bumps in the road did not stop Patricia from being the first Waylander to join the Marine Corps and did not stop her from making what she could out of life.