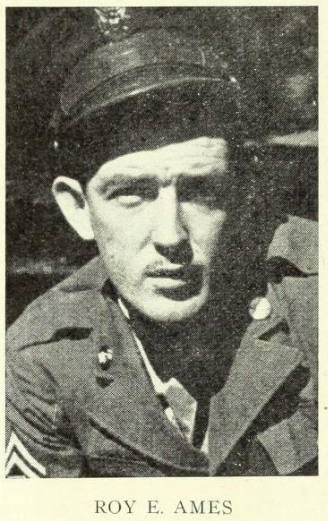 Roy E. Ames was a man of many stories. He wasn’t in as many places as some, but he saw action in both the Pacific and European Theaters of Operations. He was born into a time of great prosperity and lived through the Great Depression, during which his family was able to keep their house and the bonds that they shared. Roy E. Ames is a good example of America’s ordinary soldier whose story deserves to be remembered.

Roy was born on August 17, 1919 to his father Oliver Ernest Ames, 34 in the 1920 census, and his mother Gladys B (28). Roy grew up with 3 older siblings: Blanche E. (9),  Clarence F. (6) and Herbert W. (2). Both his mother and his father were literate, but did not graduate from high school. Growing up in a rental home, Oliver worked as a carpenter with a contracting company, while Roy’s mother stayed at home. By 1930 his mother and father had 4 more children, including Robert M. (7), Maybelle (6), Marjorie L. (4) and Dorothy (2). At this point, Roy’s older brother Clarence had started working on a farm. Roy’s early life appears to be  pretty stable. With the boom in the economy, most families were doing well for themselves. During this time, Roy was likely encouraged to play outdoors, to be adventurous, and to love his country. Unfortunately, the Great Depression loomed on the horizon and by the 1930's the Ames family was likely starting to feel some of the effects at that point. Luckily, Roy and his family weren’t affected by the depression too hard, as they were able to keep their homes according to the 1940 census. Roy only went to school through freshman year and by 1940, when he was working as a radio man for the US army. Roy clearly cared about his country and it makes sense why he joined the Army during WWII.

The Cochituate Jeep indicates "with over five years in the service" before the US joined the war, Roy  was assigned to the Schofield Barracks on Oahu. Roy was present of that fateful December day in 1941 when the Japanese attacked and later joined the Island Hopping campaign. During the Island Hopping campaign, he saw action in the Gilbert and Marshall Islands and the Eniwetok Atoll. The Gilbert and Marshall Islands were an early stop in the Island Hopping campaign for the purposes of setting up naval bases and airfields to support future operations. The Eniwetok Atoll was a smaller part of the Gilbert and Marshall Islands campaign. The islands were perfect for important airfields that would be used in the future. After his time at this particular moment in his service, he redeployed to the European Theater. and saw action in Luxembourg and Germany as a part of an anti-tank company in the 27th Infantry Regiment as a Corporal in Patton's 3rd Army. During his time in the army, he received the American Defense, European, African, Middle Eastern, and Asiatic-Pacific Theater campaign ribbons. Roy E. Ames was honorably discharged on June 27, 1945, having participated in 8 major battles of the Pacific and finished his time with the Army in Germany. During his time in the war, Roy received a lot of news about his family in the Cochituate Jeep. He read about his brother Herbert’s training and about his sister, as well as some nieces.

After Roy’s discharge, he returned to the United States and got a job as a plant mechanic at the RFC in Natick. As soon as Roy came back he also got married to a 22 year old woman named Phyllis Tobin who had lived with her mother’s grandparents. After that, Roy’s life is somewhat of a mystery. Roy died at the young age of 56, on January 5, 1956, and is now buried at the Lakeview Cemetery in Wayland. His headstone application card indicates an honorable discharge and "no decorations".

Roy E. Ames wasn’t a special soldier, for he was your average American who stepped up when his country needed him. Roy didn’t die in battle and wasn’t well known for anything, but that doesn’t mean that he shouldn’t be recognized. The best way that we can give our respects for these soldiers is by remembering who they were and not allowing them to slip away into the past. By creating biographies for these soldiers, we are preserving their memories. We shouldn’t just remember those who died or those who did something special in wars. Every soldier, nurse and person who was on the battlefield deserves to be remembered because they had the courage to go out and help protect their.