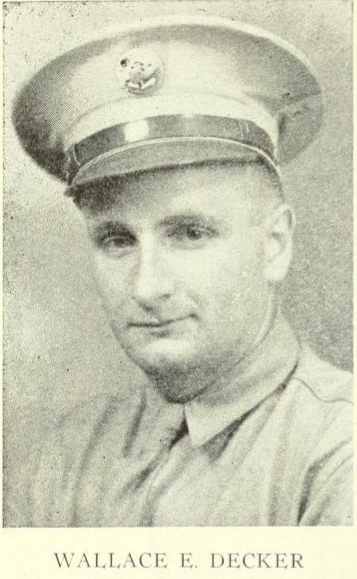 Wallace Eugene Decker was a decorated WWII soldier from the Middlesex County area. The Decker family lived from the “Roaring 20’s” and through the Great Depression. The Great Depression was a devastating time in America’s history when millions became unemployed and lost their homes. Fortunately for the Deckers, the family was not forced to move and was able to stay in their humble abode in Natick. However, like many Americans, money was an issue for the Deckers, likely only spending on the necessities of life. It was in these circumstances that Wallace entered life.

With Christmas right around the corner, Wallace Decker came into the world on December 13, 1924. Nine years later, his younger brother, Donald L Decker, was born. His parents were Sidney H. Decker and Glenora Goddard, both from British Canada. His father, Sidney, immigrated to the United States around 1923 and married Glenora the next year in 1924. As of 1930, Sidney was listed as a veteran, but where he served is unclear. With Wallace’s father being a veteran, this likely inspired him to also pursue serving in the military. He was proud of what his father and perhaps wanted to follow suit. In addition to being a father, Sidney was also a machine tender in a paper mill. Glenora was a housewife and did not work out of the home. She took care of the children, raising them as her husband was off at work. Young Wallace and his brother grew up in the heart of Natick, Massachusetts on Pond Street. It is probable that the Deckers were very careful through the ‘30s as the Great Depression impacted everyone. Sidney lost his job at the paper mill during the Great Depression and became a mill worker for Box and Board Company in 1940. The Deckers then moved to Shawmut Avenue Ext. in Wayland around 1941. Wallace had completed three years of high school in Natick and finished his senior year at Wayland High School, graduating with 26 other students in the spring of 1942. The bombing of Pearl Harbor forever changed Wallace’s post-graduate plans. Instead of heading off to work or college like some of his other colleagues, like so many of that era, he would head off to join the U.S. Army.

He enlisted for WWII on March 2, 1943, first heading off to Fort Devens. At the time of enlistment, Wally worked as a huckster and peddler, terms that today have a negative connotation. He essentially sold small items either door-to-door, from a stall, or in streets. He probably was just doing this job to make some extra cash prior to heading off to the U.S. Army as a fresh graduate from high school. Wallace started as a private, and under his enlistment, the agreement included enlistment for the duration of the war or another emergency, plus six months, subject to the discretion of the President or otherwise according to law.

Wallace received his basic training at Camp Croft, South Carolina. Most of the trainees here were men drafted into service through Selective Service rather than volunteers. He was later assigned to Cadre at Camp Blanding in Florida and following that, he was at Camp Shanks, New York. This was the United States’ largest World War II Army embarkation camp, and Wallace departed there for the European Theater. Wallace was a part of the 2nd Division, fighting in Normandy, Northern France, Rhineland, and Ardennes. Alongside SHAEP (Supreme Headquarters Allied Expeditionary Force), the headquarters of the Commander of Allied forces in northwest Europe from late 1943 until the end of World War II, and USFET (United States Forces European Theater), the Allies occupied Germany. For all his selflessness and bravery, Wally was awarded a Purple Heart with cluster, Distinguished Unit Citation, Combat Infantry badge, good conduct and victory medals, ETO with four campaign stars, and the American Theater Ribbon.

After 21 months in service, Wallace was honorably discharged in at Fort Devens, Separation Center on December 12, 1945. He planned to further his education after discharge. However, there is no record that he deepened his education past his high school diploma. On the other hand, Wally did get a job as a dry cleaner in 1947. Little did Wally know he would also soon meet his second wife Ida. Ida M. Paolino Decker was born on October 12, 1921, in Lawrence, Massachusetts. She worked as a secretary at the Army Research Center in Natick. She also worked at AVCO in Wilmington, and later at the I.R.S. before retiring. Ida and Wally met in Natick at the Army Research Center and married in Wayland in 1955. Later that year, the two of them moved to Tewksbury together to raise a family. The Deckers raised a family with two sons on 10 Brook Street, Tewksbury.
​
On February 15, 1991, Wallace passed away in Clearwater, Pinellas County, Florida. He is buried at Tewksbury Cemetery, where he raised his family with Ida. He survived by a wife, two sons, seven grandchildren, and three great-grandchildren. He was a loving father, an American patriot, and a man who was willing to risk his life while serving our country.