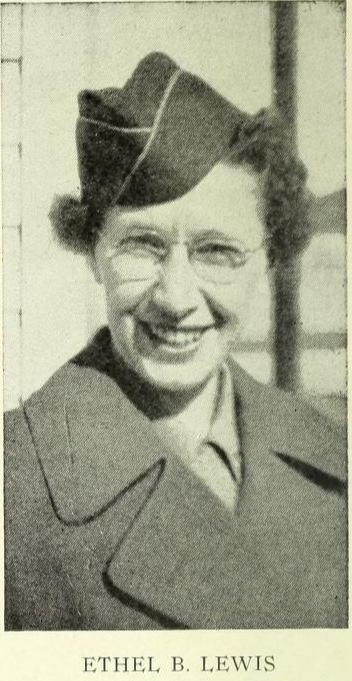 American women during World War II had certain responsibilities and contributions they were supposed to make for the war effort. For most women, they fulfilled their roles back at home by keeping the house in order, going off to work at factories to supply the army, and filling out any vacant jobs left behind by the men. Other women enlisted in the army served as cooks, nurses, and a select few in high ranking positions. Ethel B. Lewis was one of these women. She was a young, accomplished woman, part of what would later be rightly called “the Greatest Generation”. Ethel made many substantial contributions to the war effort and served nearly three years with the Women’s Army Corps (WAC). Ethel not only displayed what was generally expected of women in the war, but also showed how much of an impact women can have. Ethel had several notable achievements that put her above the majority, and she is a great representative of how much women actually contributed to the war effort.

Ethel was born in Wayland, Massachusetts, on October 14, 1910. Her parents were William and Flora Lewis. Ethel had an older sister, Lillian I. Johnson. The Lewis children grew up in Wayland until World War II began. Ethel began moving around the country a bit more to complete her training. She lived in Wayland for nearly thirty years before the Second World War even began, meaning she was likely very familiar with her hometown and spent a lot of time in  places still known by locals today. It is interesting to consider what the town of Wayland was like during World War II and how much it has changed since then.

By growing up in the 1910s, Ethel would have been exposed to the height of the Progressive Era and seen the lasting impact of Teddy Roosevelt’s presidency. The Progressive Era was a period of widespread social activism and political reform across the United States that lasted from the 1890s to the 1920s. A few examples of the things progressives looked to endorse were temperance, business regulation, women’s suffrage, consumer protection, and conservation. Because she witnessed this movement growing up, Ethel may have been inspired by the activists’ efforts, becoming more inclined to step up and make a difference later in life, as she did with her enlistment. Additionally, one distinctive gender norm that all American girls learned to follow was that they would one day be responsible for keeping house and taking care of their husband and children. Ethel, along with her sister, likely helped their mother frequently with house chores such as cooking, cleaning, and other housewifely duties. This household responsibility Ethel shared with her sisters may have led her to train in the Bakers and Cooks Division for three years with the WACs. Ethel’s childhood definitely influenced her participation in the war years, making her a talented and notable member of the war effort. Early on in her childhood, Ethel witnessed the first World War break out across the globe. She was only four years old when the war began in Europe, and eight when it ended. Ethel was probably unaware of the political aspects of the event and only noticed how it affected her family. She had no brothers, so only one man lived in her household: her father. Local records indicate that Ethel’s father did not serve in the first world war, but surely the widespread patriotism and concerns for the troops seeped into the Lewis household. It would be a surprise, for example, if Ethel and Lillian didn't joiningg the festivities of the huge 4th of July celebration in 1919, when the Wayland troops were formally honored and parades, music, food, and square dancing were all part of the day.

Years later, as Ethel was reaching adulthood and preparing to start her own family, the Great Depression hit hard in the U.S. in 1929. Ethel would have only been twenty years old and likely cautious with her planning and spending. For the rest of that decade, she would have been eagerly watching and waiting for President Franklin D. Roosevelt’s next move to bring an end to the financial crisis. She certainly would have been well-acquainted with the New Deal and would have done whatever she could to help the country out of the Depression. This means that Ethel would have likely listened to Roosevelt speak to the citizens in his famous Fireside Chats and complied readily. When Roosevelt put the U.S. economy back on track, if she was not completely under his spell already, Ethel probably trusted him more, which could have led to her support of him during the coming war years.

In 1934, Ethel married her first husband, Burton George Godsoe, a young man from the neighboring town of Belmont. However, their marriage didn’t last long, and they divorced before World War II began. Ethel was approaching twenty-nine when the beginning of the Second World War broke out in Europe. Ethel was eager to help her country and do whatever she could for the war effort. According to the Cochituate Jeep, Ethel enlisted in service with the WAC on December 17, 1942. Here she served for nearly three years and trained in Fort Devens, MA, Daytona Beach, FL, and Big Spring, TX. Ethel went on to receive the WAAC Good Contact, Victory and American Theater medals. Ethel then married her second husband Clifford F. Luzar, also a member of the armed forces, in Big Spring, where she served as First Cook for two and a half years. Clifford served with the Army Air Corp, where he was enlisted for three years as a private. Ethel was honorably discharged at the rank of Sergeant on November 3, 1945. Before the war ended, Ethel and Clifford had their only son, Thomas Charles Luzar, in 1944. With a new child and a position in the armed forces and a husband in the Air Force, it is likely Ethel was longing for the war to end as soon as possible. She probably supported President Truman’s decision to bomb Hiroshima and Nagasaki because it ended the war immediately, before her husband would possibly need to join the invasion of Japan. After the war, Ethel and her family settled down in Big Spring. They later moved to Clifford’s hometown of Hennepin County, Minnesota. Ethel and her husband were the organists together at their chapel, where they spent much of their time after the war.  Ethel died peacefully in Hennepin County on January 25, 1985 at the age of 74.
​
Ethel B. Lewis is an excellent representative of women’s role in World War II. She grew up learning how to take care of a home, made significant contributions to the war effort, and dutifully completed her role as a WAC. Ethel had to navigate through the Great Depression during her early twenties and sacrifice a portion of her family life for the war. Ethel shows us what women could do to make a difference in their country.