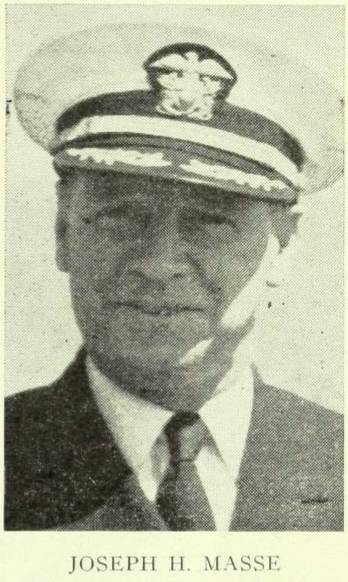 Joseph Henry Masse was a Naval officer and among other leadership roles, the captain of the U.S.S. American Mariner during World War Two.

Joseph Henry Masse was born on November 15, 1902, in Everett Massachusetts. His father, Joseph Ambroise Masse, was born in 1873, and his mother, Margaret Casey, was born three years later in 1876 (the end of Reconstruction). Joseph had six siblings: Mary R, John Arthur, Rose Gertrude Carroll, Caroline H. Cordwell, Lena Grace Wilbur, and Ruth Margaret Kelly. It was a very busy household. Growing up, he lived next to the Kellys, and his childhood friends were probably James Mary John and Margaret Kelly. James and Mary were a little older than him, for James was 26 and Mary was 24, but 18-year-old John and 15-year-old Margaret were just about Joseph’s age. He was 17 at the time. In the years before the census, he probably grew up exploring the woods with the Kelly’s. They would be building slingshots and catching frogs in the Indian river nearby. He started working when he was 16 as a merchant mariner. He worked year round, so he probably wasn’t home very often from the late 20s to the early 40s, because he would often be out at sea when working for the merchant marine, and eventually captaining a ship.

Although the war didn’t change what Masse did for a job, it made his job a lot more dangerous. Masse was the captain of the U.S.S. American Mariner. The U.S.S. American Mariner was originally a Liberty ship that was stationed in both the Atlantic and Pacific theaters. Like all Liberty ships, it was based on British cargo ship design. These ships were mass produced during the war. There were 2700 liberty ships made by the end of the war, making the liberty ship the most produced large vessel at the time. The liberty ships were responsible for transporting people and cargo during WWII. As Mr. Delaney put it, “The liberty ships were like the railroads of the oceans.” These ships were extremely slow and made very easy targets for the German U-boats. In response, the U.S. simply produced the liberty ships at a faster rate than the Germans could sink them! This came at a great human cost. Not only were many liberty ship passengers dying because of the U boat attacks, but many workers were exposed to asbestos. During 1941 and 1942 alone, the German U boats sank 2,963 Allied ships, and the United States built 863 ships to replace them. The freighters and liberty ships were considered an expendable resource that the United States could easily replace. While Commander Masse was activated out of the Naval Reserve in July, 1942, his role was similar to the Merchant Marines, which had the highest casualty rate out of any service, even though they weren’t considered a part of the United States forces. 8,421 merchant marines, or roughly one out of every 26 died. To put it in perspective, this is higher than a rate of 1 in 34 in the marines, 1 in 48 in the army 1 in 114 in the navy, and 1 in 421 in the Coast Guard.

The U.S.S. American Mariner started as a cargo ship named the George Calvert out of the Bethlehem-Fairfield shipyard. When it was almost finished it was changed to a training ship for the Merchant Marines and renamed the American Mariner. The American Mariner was still used after the war until late 1953 when it was moved to a reserve fleet at Jones point. It was then used for missile defense research that helped conclude that “it was virtually impossible even with a nuclear-tipped missile--like trying to stop a baseball thrown at your head by tossing firecrackers in the air.” Eventually, the ship was repaired and upgraded to be used by DAMP: the Downrange Antimissile Measurement Program. The researchers on this program needed a ship to watch the missile launches because the missiles were fired into the ocean. In 1959, the ship was back to the sea. In 1962, the army transferred this ship to the Air Force where she monitored Operation FISHBOWL. This operation tested the use of nuclear weapons at high altitudes. The researchers were trying to see if they could knock enemy missiles out of the sky with nuclear weapons. Next, the ship was transferred to NASA and used in space operations like the reentry of the Mercury spaceship. In October 1966, the ship was sunk by a Navy demolition team punching holes in her with explosives, so she sunk to the Maryland mud. The American Mariner was then used for target practice, and despite over 40 years of abuse, is still used to this day.

During the war, Masse would send messages back to the community in Wayland published in The Cochituate Jeep. At one point he warned soldiers and the community at home to be careful with, and not take back souvenirs from the war. He said that souvenirs capable of decapitating your loved ones at home should not be brought home to your family. He told stories of many young children killed by weapons taken home as souvenirs that people thought were harmless. He also wrote back to the boys and girls of Cochituate, congratulating the members of the Honor Roll. He said it was a good symbol of what the men and women that left Cochituate were fighting for, and that they were doing their part. In the last letter given to The Jeep, Masse again congratulated the Honor Roll committee and all the people who created the memorial. He mentions his admiration for the memorial and his pride of those who helped make it.

In the 1940s, Joseph bought and lived in a house next to the Stevens and the Kohlers on 88 West Plain Street in Everett, Massachusetts. After returning from the war in 1944, he did not go back to school, sticking with his 2 years of high school education. He continued his work for the American-Hawaiian Steamship Company after the war, working 80 hour weeks year round. Raymond and Alice Stevens and Otto and Dorothy Kohler were around his age, so they were probably the neighbors that he got to know as he grew older in the years after he returned from the war. While he was away, his wife and other members of the Cochituate community were on a committee to build a memorial for the people returning from the war. He had two kids, Joseph Jr and Jacqueline DeAngelo, and three grandchildren, Debra, Robert, and Todd. His father, Joseph Ambroise Masse died in 1956 at 83 years old. Joseph Henry Masse was not as fortunate, dying on January 16, 1957, just a year after his father. He is buried at Cochituate's Lakeview Cemetery and is remembered as an accomplished seam and fine citizen. After his death, his wife lived in another house down the road, so Joseph was well off enough to provide her with a comfortable rest of her life after his death. His mother died 14 years later in 1971, and his wife died ten years after his mom on January 29, 1981.
​
Joseph Henry Masse was a Navy veteran and talented mariner, one of the unsung heroes of the war.