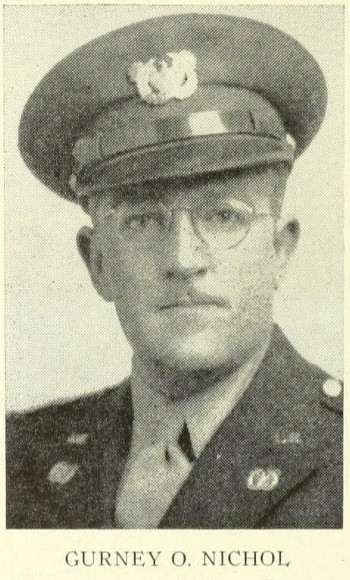 Gurney O. Nichol, a Canadian, led men into a war mentality for America. He lived through tough economic circumstances in Canada before moving to the United States with his family. He was lived in America throughout the Progressive Era, Great Depression, and World War II. In Canada, living in the early 1900s could be challenging, as economic and living conditions were generally poor, and it was difficult to change one’s economic status. Nichol came to America in the midst of the Progressive Era as a young boy. Although not American by birth, Gurney was a patriot and tried to find ways in which to serve his community. He worked as a warrant officer during WWII, tending to the lives of wounded and diseased soldiers and rehabilitating them. Even after he was discharged from duty, he continued to work at a hospital caring for patients.

Gurney was born on July 21st, 1902, the beginning of a new century, in Coal Branch, New Brunswick, Canada, to George Fletcher Nichol and Laura Mina Wilson. The 20th century was a fresh start for America after the Spanish American War. This was the same year that the Tyrannosaurus Rex bones were found in Montana and stuffed bears were named “teddy bears” after U.S. President Teddy Roosevelt. The Nichol family was a working middle class family. George was born on March 22, 1863, in Moncton, New Brunswick and as an adult worked for General Electric as a packer and was also a carpenter. His wife Laura was born on June 28th, 1866, in Berry Mills, New Brunswick. She gave birth to a total of eight children, of which only seven survived to adulthood. Gurney was the youngest of his siblings. In 1910, Gurney’s oldest sister, Myrtle Nellie Nichol, was 21 years old and attended school while working as a nurse at a hospital. She was born on July 1st, 1889. The next eldest sibling was Ina Ida Nichol, born on January 15th, 1891, and she worked at General Electric. Georgia Ivor Nichol, called Georgie by her father, was born on February 8th, 1892. She worked at General Electric for testing sanding and assembling instruments. James Douglas Nichol was born on June 2nd, 1893. He worked as an assistant foreman at General Electric. Glendora L Nichol was born on August 26th, 1895. Lastly, Russell Allison Nichol was born on November 22nd, 1900.

The prospect of a new beginning attracted the Nichol family to America. In 1906, when Gurney was four years old, they decided to pack their bags and begin a new life in Massachusetts. This was the height of big business's power, but slowly democracy was improving, and social justice was increasingly becoming a part of the public consciousness. Women gained the right to vote in just two decades, and Prohibition would take place due to temperance reform. The Nichol family began their journey on April 15th, 1906, traveling by train to reach Boston, eventually residing just north of the city at 104 Gardiner Street in Lynn.  Gurney’s oldest sister Myrtle married Cornelius Henry Buckley on October 22, 1913, and moved from her family’s house to live at her husband’s residence in Boston. In 1923, Ina married Henry Burgess Carnegie, an immigrant from Scotland. (Henry was also drafted into WWII).

Gurney stayed in school for many years, and was still a student in 1925. Meanwhile, the Great Depression was approaching. The stock market crashed, and many were left jobless and hungry. Gurney was an inspector at an electrical plant (General Electric) from 1928 into the early 1930s. Money was tight, and Gurney moved to Manchester, New Hampshire, in 1931, and, a year later, with Georgia and their parents, moved again to Bedford, NH. Sadly, Gurney’s mother Laura Mina died on Nov 18, 1935, at the age of 69 in Bedford. After her death, Gurney and his sister Georgie moved back to Lynn on 12 Blakeley. Shortly afterward, Gurney wed Alpha Elise Coleman in 1936. Alpha was born in New Hampshire, but was raised in Lynn for the majority of her life. Alpha was previously married to Amos Stanhope in 1924. Amos and Alpha had Lillian and Roland Stanhope. Lillian Mary Stanhope was born on January 22, 1925, in Lynn, Massachusetts, and Roland Ely Stanhope was born on December 6, 1932, in Lynn, as well. Gurney treated Lillian and Roland like they were his own children. His father later passed away on August 22, 1938, in Nashua, New Hampshire, at the age of 75. Gurney finally moved from Lynn to Wayland in 1938. With his family, he resided at 94 North Main Street, Cochituate. At this time, he worked as a clerk at Commonwealth Depot in Natick.

After originally enlisting in the mid 1920's, on January 16, 1941, approaching his 39th birthday, he Gurney re-enlisted from Cambridge MA. Before enlisting, he completed two years of college. At the same time, America was recovering from the Great Depression and would soon become entangled in WWII following the Pearl Harbor bombing. Gurney served in the Army National Guard as a Master Sergeant with the Corp of 101st Engineers, 26th Division--nicknamed the “Yankee Division” at Camp Edwards. As Master Sergeant, Gurney instructed the training of recruits at Camp Edwards. The 101st Engineer Battalion fought with the 26th Infantry Division under Patton's Third Army and provided the maps to the Third Army for the relief of the 101st Airborne Division during the Battle of the Bulge. The Battle of the Bulge occurred from December 16th, 1944 to January 25th, 1945, and Gurney trained many of the men who would fought in this famous battle.  On December 26, 1944, at the Battle of Bulge, the 26th Infantry Division (Yankee) supplemented the front of General Patton's 4th Armored Division, breaking through and opening a corridor to Bastogne in Belgium. Gurney then reenlisted a second time on January 1st, 1943. Several months later, his older brother James Douglas Nichol, who also served in WWII, passed away in July, 1943, at the age of 50.

Camp Edwards had a convalescent hospital that opened in 1942, which may have inspired Gurney to work in hospitals. After working as a Master Sergeant with the Yankee Division, Gurney served as a warrant officer at hospitals in McKinney, Texas, and Claiborne, Louisiana. In McKinney, Texas, there were 1592 beds at the Ashburn Hospital, where Gurney was committed to helping the patients. These hospitals provided housing and beds to support a system of field hospitalization and evacuation. Gurney worked with technical equipment and cared for minor diseases and injuries. If in serious condition, patients would be sent to general hospitals. Eventually, Gurney was discharged from service on May 4, 1944, with a rating of Warrant Officer. He discharged about a month before D-Day, when American soldiers stormed the beaches of Normandy in France. He worked in the Medical Corps in Texas and would continue this line of work in Massachusetts.

After being discharged, Gurney began working as a warrant officer at Cushing General Hospital in Framingham. He loved his job and missed helping others in need, and the war was still rampaging in 1944. He was also a member of the Charles H. Alward Post. American Legion of Cochituate, and served as a delegate to the American Legion convention in Boston in 1944. Gurney wanted to surround himself with patriotic veterans and continue the strong soldier camaraderie. His leadership skills were recognized in the American Legion as well, and he was promoted to senior vice commander.
​
Tragically, on March 30th, 1945, just shy of his 43rd birthday, Gurney died at his home in Wayland due to coronary occlusion, leaving his wife widowed. Gurney is buried at Lakeview Cemetery in Wayland. His wife Alpha was given a war bond after his death, and it's unclear where she subsequently went and when or where she died. Gurney’s stepson, Roland Stanhope, died on January 24, 2000. He had served in the Korean War and was recognized as a Korean War Veteran. Lillian Stanhope became Lillian English and died about a year after her brother on December 7th, 2000 and is also buried at Lakeview Cemetery in Wayland just like her stepfather. An immigrant, patriot and contributing citizen, Gurney Nichol lived a short but meaningful life, and we thank him for his service.