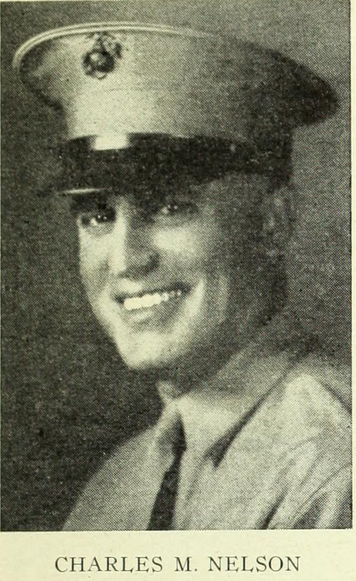 Out of the 1940s community of Wayland, Massachusetts, a select few made the brave decision to join the Marines in the fight for freedom against all fascist foes. Out of all of these men and women, one such true patriot was Charles Marion Nelson. From the time he was a young child to his death bed, Charles lived a life of public service and dedication, committing himself to the people that surrounded him, even if that meant getting into harm's way.

Charles Marion Nelson was born on January 13th, 1906 in Thurston, Nebraska to Charles Nelson (48 at the time) and Bertha Nelson (38 at the time). When Nelson was born, the US was beginning to enter the Progressive Era, when factories thrived with the constant influx of immigrants. During this time period, presidents like Theodore Roosevelt and Woodrow Wilson helped usher in a range of reforms to make the country a more humane place for working people.

Charles was born a American citizen, but understood the enation's place as a nation of immigrants, for his grandparents on his father’s side, Christina Bengtson and Oscar J. Bengston, were from Sweden. Undoubtedly, Charles’s grandparents reaped the benefits of this new Progressive Era Movement after they had immigrated to the United States.

Towards the end of this movement, World War I began, and with men leaving their houses and jobs, American society was forced to adjust and do their part to compensate for the loss. Tens of thousands of jobs were left with vacant spots, allowing women to enter the workforce at previously unknown rates.   Although the Women's Suffrage Movement had resulted in women getting the right to vote, prior to the “Great War,” they were still a small part of the industrial labor pool, so the war provided an opportunity that had never been seen before. During this time (1916-18), when Charles was 10-12 years old, every child in America was expected to “do their bit” in order to help the war effort. One small way that children would contribute to the war effort was to be frugal with food and even grow Victory Gardens.  Additionally, children would buy the U.S. Treasury bonds in order to give the military necessary funds. Surely a part of Charles's childhood was centered around war efforts and helping the soldiers. Looking up to these soldiers for the years that he was aiding them may have contributed to Charles’s reasoning behind voluntarily enlisting in the Marine Corps prior to the start of World War II.

After receiving education through the 12th grade, while living in Barnes and Buena Vista Illinois with his family, Charles made the decision to enlist. Sent to Norfolk, Virginia for basic training, he met his future bride-to-be, Bertha Craig. Born in Wayland, Massachusetts in 1898, Bertha was a machine operator in a leather factory, which perhaps was a result of the growth in factory jobs during World War I. On January 7th, 1928, at the age of 30 and 22, Bertha Craig, now Bertha I. Nelson, and Charles M. Nelson tied the knot in Norfolk, Virginia, near Charles’s military base and basic training site.

After completing basic training, Charles (now in the reserves) and Bertha moved back to Wayland, living peacefully up until the start of the Second World War. According to the Wayland Town Reports, in 1939-1941, Charles served as a constable as well as the engineer (fire truck operator) for the fire department. Developing a reputation as a strong military man and one devoted to public service within his community, Charles’s public image aided his prolonged service in the public safety and law enforcement areas prior to his departure for the war.

On December 7th, 1941, World War II began for the Americans, just as Charles was in the middle of a term as engineer of the fire department. However, Charles was called to “return to service” before this, on October 7, 1940, a full 14 months before the US entered the war, but around 13 months after the war had officially begun in Europe. Charles, unknowingly at that time, was called upon for service in anticipation of the US entering the war.

Back in Virginia, this time in Quantico, Charles was an NCO (non-commissioned officer) rank of Sergeant. This was likely due to his prior military training and demonstrated commitment to the armed forces. After being appointed as a leader, Charles was eventually transported to the war in the Pacific. Although Charles was not the most decorated officer, he was able to earn a number of service medals while in the Pacific. These included medals from Unit Citation, Marine Corps Expeditionary, 2nd Nicaraguan, American Defense, American Area, Asiatic-Pacific Area, Philippine Liberation, and the Victory and Marine Good Conduct.

Even though Charles had enlisted and joined the Navy, he was actually a Marine. At this time, the Marines were not an independent branch of the military and were still under the command of the Navy. As a Sergeant, Charles was usually in command of a squad, which consisted of 9-13 other Marines. Charles, through his demonstrated courage in multiple battles, was able to progress through the ranks from Sergeant to Staff Sergeant to Gunnery Sergeant and then to his final rank at the end of the war, Sergeant 1st Class. Considering the number of ribbons that Charles was able to earn from various battles and trips that he was on, it can be inferred that Charles was predominately a combat soldier, leading his fellow squadron comrades into action. Charles saw action in the Philippines, Iwo Jima, Okinawa, Honshu, Kyushu, Shikoku, Amami O Shima, on the China Sea, and participated in the occupation of the Tokyo Bay Area. Although Charles was very much a part of the Island Hopping Campaign while he was in the Marines, the Philippine liberation was one of the most important sieges that Charles took part in. Charles’s efforts along with many others quickly became a crucial part of the shift in momentum, as the US was able to push the Japanese out of the Philippines and slowly inch closer to the Japanese mainland. Additionally, Charles’s service on Iwo Jima, one of the bloodiest battles in the Pacific, a siege that lasted almost 5 weeks but ultimately ended in an American victory, was very important to the US.  Following the history of the Marines within all of these sieges, Charles served mostly on the land, invading certain areas via amphibious assault. Apart from this, his transports were on battleships such as the USS Vicksburg which was his final transport home.

On November 1, 1945, right around 2 months after World War II had ended, Charles was honorably discharged as a 1st Sergeant after disembarking from the USS Vicksburg. Following this, Charles returned to a residential life; however, he did not return to the public safety or law enforcement area. Charles instead chose a much more peaceful job at the Roxbury Carpet Company in Saxonville, Massachusetts. He made his home with his wife, Bertha, on Pemberton Road. There is no official record of how long Charles continued to live here as he disappeared from all town records at this time. It is probable that Charles, even if not living in Wayland, continued to live in the Metrowest area.

On March, 3rd, 1980, Charles Marion Nelson died peacefully in Natick, Massachusetts, at the age of 74. Charles’s heart was that of a true American, patriot. It is safe to say that without Charles and his "Greatest Generation", we would not be where we are today.