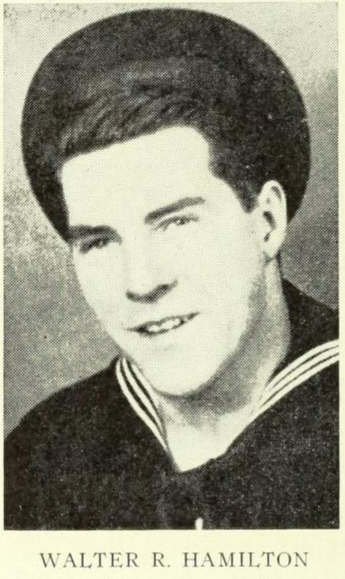 This is written in the memory of Walter Robert Hamilton, a man whose life, like millions of others, was thrown into complete disarray by one of the bloodiest conflicts in history, World War II. When war arrived on Walter’s doorstep, he did not sit back and leave the job to others; he took the call action and stood up to defend not only his country, but the rest of the world from the fascists who were headed down a path to destroy the world as they knew it. The “Greatest Generation” was full of courageous and selfless men and women. Although he was one among millions, Walter Hamilton’s life was as fascinating as any, and this is his story.

Walter was born in 1924 during the “Roaring Twenties” to George and Barbara Hamilton. He had a brother who was five years his senior, George Hamilton Jr. By the time Walter was born, the Progressive Era had run its course, Theodore Roosevelt had died, and many reforms had been made addressing major U.S. problems including industrialization and political corruption. Although significant progress had been made, there were difficult times ahead. When Walter was five, the stock market crashed and sent the U.S. into a panic. People had put too much money that they didn’t have from bank loans into the market and when it crashed, and millions had lost their savings due to the banks going out of business. Around that time in 1930, the Hamilton family lived in Waltham, Massachusetts, on 307 Marrvestra Avenue and were a relatively average middle-class family. Walter’s father, George, was a bus driver in the city. His mother was a domestic engineer (a homemaker). Kids during Walter’s time were creative, independent and tough with keen minds capable of finding interesting ways of keeping themselves entertained. Without electronics to distract them, kids during the twenties spent long hours outside, tromping through the woods with homemade slingshots or to the lake with handcrafted fishing spears. Poor weather would not hold them back. On rainy days the kids read books, played board games, or learned new magic tricks to entertain themselves and their friends. Walter and his brother George were excellent examples of keen and interesting lads as both were on the honor roll and probably would have taken part in these activities during their free time as well.

By the time Walter was about fifteen years old, war began brewing across the Atlantic. Hitler and his army invaded Poland on September 1, 1939, as Walter attended high school in Waltham. As a fifteen year old beginning to understand the world around him, Walter undoubtedly would have heard of Adolf Hitler’s Nazis and their conquests across Europe. Although the United States remained neutral for the first few years of the war, young men like Walter were easily inspired and intrigued by the stories they heard from Europe. As the 1940’s began, Walter likely would have begun to consider his place in the conflict. On December 7, 1941, Walter’s life was altered forever. The Japanese Navy bombed Pearl Harbor, forcing the U.S. to enter the war and Walter to consider his next steps as a seventeen-year-old student. The battle that once seemed a million miles away was now right at Walter’s doorstep. After the attack, propaganda spread like wildfire through the U.S. as Uncle Sam tried to recruit young men to take up arms against the Axis Powers. Walter would have seen these posters and PSA’s everywhere he went. The propaganda that prompted young American men to “be strong” and “join the fight” likely would have inspired Walter as it did thousands of others. Two years after the U.S. entered the battle, in 1943, Walter joined the Navy at the young age of nineteen. The youngest age at which Walter could have joined was seventeen (with parental consent). However, being the brilliant student he was, Walter most likely wanted to finish high school before joining the army.

Walter entered the ranks as an A/S on the eighteenth of March, 1943, and after passing basic examinations, he was sent to boot camp training at Newport Rhode Island Naval Training Station. Walter trained in Rhode Island for eleven months, learning about and working on motor torpedo boats until April of 1944, where Walter’s training was put to the test. On April 18, Walter Hamilton was shipped out of Brooklyn, New York to join the battle against the Axis Powers in Europe. Walter would need to use everything he had learned over the few short months of training in order to keep himself and his fellow soldiers alive. His first mission would push him to the breaking point. The United States invaded Normandy on June 6, 1944, and Walter Hamilton was in the ranks, probably quaking in his boots. The invasion of Normandy was no small task. It was the largest amphibious assault in history. No amount of training could have prepared the American soldiers for what was about to happen. During the D-Day invasion, Walter fought in the 34th Squadron along the Normandy coast on Cherbourg and the Channel Islands. While on the Channel Islands, Walter served on vessels called patrol torpedo boats, which were fast armed attack boats used to engage anything from warships to supply cruisers. For his service in the Channel Islands, Walter, along with the other members of his warship, received two battle stars on their European Theater of Operations ribbons for their participation during the siege. Later in the Battle of Cherbourg, Walter and the other members of the 34th Squadron worked on naval vessels floating off coast. They loaded and fired shell after shell to bombard German fortifications near the city in order clear the way for the infantry to launch their assault. The peninsula surrendered on June 29th, after a successful siege by U.S. commandos. Once the invasion of Normandy concluded in July, Walter did not see front line action for nine months, including a month-long leave. This would have been a time of great relief for Walter, having survived one of the most dangerous assaults in history. Despite his valiant service in Normandy, Walter and the 34th Squadron were called back to action on April 21, 1945, when they departed from Treasure Island, California, and headed west to join the finale, the Battle of the Philippines in the Pacific Theater. Walter was on patrol duty along the island coastlines and served out of a patrol torpedo base during his time fighting in the Philippines. After the campaign in the Philippines concluded, the 34th Squadron received the Presidential Unit Citation for their brave contributions to the battle.

Towards the conclusion of the war, Walter was stationed on a naval base in Shoemaker, California where he worked as a cook on the motor torpedo boat, the USS Oyster Bay. During his free time, Walter enjoyed visiting his aunt and uncle in Oakland and other family that lived in the area, as well as talking to his parents and fiancée over the phone. On September 2, 1945, World War II officially ended after Japan surrendered. With his war days behind him, Walter married the love of his life, Marjorie May Williams in Wayland, Massachusetts, on March 23, 1946. Walter was twenty-two at the time and Marjorie was twenty-three. They stayed together for the rest of their days.
​
Walter Robert Hamilton was a very much a man of his generation. He joined the Navy knowing there was a chance that he would never return to his hometown in Massachusetts or see his family again. He fought in multiple battles, knowing it might be his last. Despite this knowledge, he, along with the rest of “Greatest Generation,” still fought with valor and courage to defend the things they knew and loved. Walter Hamilton met his call of duty during World War II and his story, along with countless others, can still inspire us today.