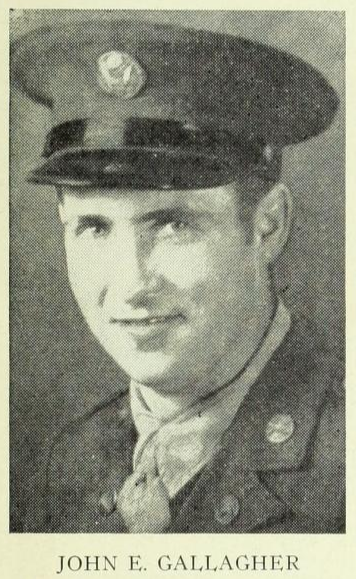 John E. Gallagher was one of the millions of soldiers in the Second World War. His role may seem insignificant in the grand scheme of things, but his modest contributions definitely impacted the war's favorable outcome.

As if a prelude to his later actions, John was born at the beginning of the first World War to Elizabeth and Francis J Gallagher in 1917. The second oldest of six siblings, he was three years younger than brother Francis, and about five years older than brother Bernard. John also had three younger siblings: Vincent, Mary Ann, and Raymond. Larger families were common in those days, but the Gallagher siblings were spread out over 18 years, so when Francis Jr. became a legal adult, his youngest sibling had just been born.

John was too young to really enjoy the Roaring 1920’s, for he just turned 12 in 1929, however, he knew that his family was doing okay, for his father was employed as an engineer with a salary. Around John’s 12th birthday, his life changed for the worse when the Great Depression hit the United States. Francis Jr. was able to graduate high school that year, but John was still in grade school. The family lived at 7 Pleasant Street in Wayland, a small house built in 1870. The Gallaghers managed to hang on to their house and livelihoods as both Francis Sr. and Jr. worked full time for a salary. However, three years later, John was forced to abandon his education after only two years in high school because he had to support his family. He began to work as a pipe caulker for the Boston Resources Authroity and his work amped up when construction on the Quabbin Reservoir began in 1936. While the Gallagher men worked to provide for the younger children, the Great Depression was slowly but surely improving.

John’s big brother Francis saw a war brewing and decided to join the army on January 16th, 1941, nearly a full year before American entry. When Francis left for training, the U.S. was still not actively involved in the war. This all changed on December 8th, 1941 when the United States joined the fight against the Axis powers after Japan bombed Pearl Harbor. Immediately, the bombing caused widespread angst and outrage in the states. Thus, John and his brother, Bernard, followed in their brother’s footsteps by becoming just two of the 15 million men who joined the service during the war. About 10 months into the war, Bernard was called to action in October of 1942, and just a month later, John was inducted into the U.S. Army on November 2, 1942. He began his basic training at Camp Gordon and Fort Benning in Georgia. During training, he was assigned to the Third Tank Battalion in the 10th Armored “Tiger” Division. He traveled to Camp Shanks in New York, the largest U.S. embarkation camp. There, the Tigers were processed and shipped out to their first assignment. They entered the European front through Cherbourg, France and trained for another month before being sent to aid in the victory at Mars-La-Tour on the second year anniversary of John’s induction into the military: November 2nd, 1944. After the victory, the soldiers, once again, were the victors in the capture of Metz. Soon, they were assigned to assist in the fighting at the Siegfried Line and invaded Germany on November 19th, 1944. Just under a month later, John and his fellow Tigers were sent to Bastogne, Belgium, where John’s brother Francis was also fighting. While there is no record of them making contact with each other, one hopes that they were able to have an emotional reunion. During the Battle of the Bulge, the Tigers fought valiantly, and for their courage, tenacity, and meritorious service, were rewarded with the Presidential Citation upon returning home.

At the end of the war, John had earned the rank of T/5, or Tech Corporal, and was honorably discharged on February 9, 1946. Just before he came home, he received the news that his baby sister Mary Ann was able to attend Boston School of Dental Nursing. Attending the Boston School of Dental Nursing must have instilled a sense of joy in John, for he could hardly wait to congratulate her in person. John was married to Mary Muller and they had their first child in 1949, three years into the post-war baby boom. The pair had a baby girl whom they named after John’s sister, Mary Ann. They lived out their lives together, until John’s death at the relatively young age of 65 in 1982. Mary and her daughter carried on John’s legacy, but unfortunately, their daughter passed away suddenly at just 55 years old. Mary lived a long life, from 1923 until 2007. They now rest at the St. John the Evangelist Cemetery in Hopkinton, Massachusetts.
​
John may not have lived out a very long life, but he is a perfect example of a member of the “Greatest Generation”. John was able to overcome the struggles of the Great Depression and survive the bloodiest war in world history, and he fought hard to protect our country’s freedom. Each veteran of World War II deserves our utmost respect and reverence, and each story is unique. John Gallagher’s story is one of millions, but is nonetheless important to tell.