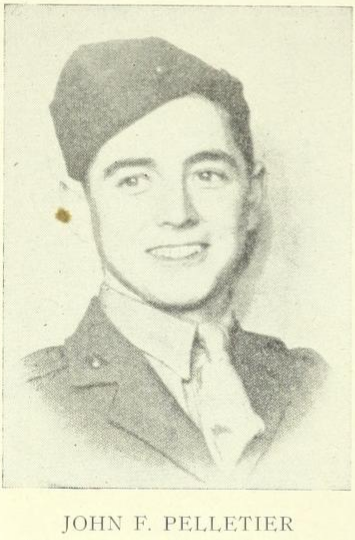 John Francis Pelletier was a highly regarded veteran who served in the final years of WWII in the Pacific Theater. This brave man sacrificed his peaceful life to help rid the world of evil and eventually bring an end of the most horrifying war in world history. Even after the war, John Pelletier gave back to his community and continued to protect his beloved country for many years.

John F. Pelletier was born right in the middle of the “Roaring Twenties,” a decade of economic prosperity and cultural change in major cities around the country. The Jazz Age and Prohibition were prominent in the US, and technological advances like radios were becoming popular around the time of John’s birth. On June 2nd, 1925 in the town of Natick, John was born to parents Helen and Ernest Pelletier. The family lived on 24 ½ Mill Street. He was the middle child, with an older brother taking their father’s name, and a sister named Joan who was four years his junior. In contrast to Helen’s birth in Massachusetts in 1904, Ernest Sr. was born in Canada, but grew up in Maine. Ernest Sr. was the breadwinner of the family; he was a proofreader (a wage worker) at Tag and Bog Manufacturing. Pelletier’s parents were both literate but did not attend school as children. They sent John to school in an effort to give him the education that they never had. When he was enrolled at Wayland High School, a life-changing event that occurred in his teen years that shocked the nation out of its isolationist bubble.

After the Japanese attack on Pearl Harbor killed thousands of American citizens, millions of newly outraged and emboldened young men enlisted in the US Military, ready to sacrifice everything to defend their country. John joined the Marines in October, 1942 at the vulnerable age of 17 to serve in the war. He landed near Auckland, New Zealand, and was assigned to a destroyer escort called the USS Hollis to fight in the Island Hopping Campaign. Pelletier was a sergeant in the 3rd Marine Division, and soon joined the battles in the Bougainville Campaign, a series of battles both land and naval that were fought between the Allied forces and the Japanese Empire. John then took part in the famous Battle of Guam, fighting alongside nearly 60,000 troops. Pelletier fought valiantly, and his bravery and determination payed off. He was awarded the Bronze Star Medal, which is given to soldiers who fight heroically in a battle zone. In addition, he received his first Presidential Citation, which is also awarded to soldiers who fight extraordinarily and heroically in battle. John was recognized for his bravery, strength, and courage at only 19 years old.

Pelletier’s last major battle was known worldwide as the Battle of Iwo Jima. Sadly, John was injured along with approximately 20,000 American soldiers. However, his injury came with a reward. Pelletier was given his second Presidential Citation Award and the Purple Heart. After being sent back to Guam, he was able to recuperate in a hospital. On April 6th, John left Guam and started to make his way back home. Well known and popular among Waylanders back home, he was affectionately nicknamed “Johnny” in the Cochituate Jeep and was considered a town hero by many. The townspeople received a special surprise three days later when Pelletier was able to broadcast back home in the middle of the Pacific Ocean. Despite having reached adulthood, he was forever a Cochituate kid, and his commitment to not only to defeating the Japanese but also to serve the people in his hometown was evident in his character.

After the war ended, John was awarded the Asiatic-Pacific Campaign medal with 4 stars. The medal was given to everyone who served in the Pacific Theater. These awards and citations did not satisfy Pelletier’s desire to serve his country, and he continued to do so through various jobs. Pelletier served as a Sergeant in the Marine Barracks in the Naval Ammunition Depot. Working in Hingham, Massachusetts in the late months of 1945, he was not too far from his hometown. Pelletier was discharged on October 3rd, 1945, after 38 months of service to the United States. His release from service dismissed him as a protector of his country but better enabled him to help his community. In 1952, he began a career in law enforcement on Wayland’s police force. Serving his loving and supporting hometown, John worked as a Special Police Officer, being reappointed in May of 1955.

Eventually Pelletier furthered his law enforcement career by serving as the police chief from 1961 through 1971 in Pepperell, MA, and for the ten years after that in Merrimack, New Hampshire. After he left behind his career as a police chief, John lost some of his beloved family members. His mother passed away in 1986 in Fall River, Massachusetts at 83 years old. By the 1990s, Pelletier had moved out of New England and settled in the small town of Manteo, North Carolina near his family. In 1997, John’s older brother Ernest Jr. passed away at the age of 73. Only five years later, just a few months after his 77th birthday, Pelletier died on September 15th. He passed away surrounded by his wife Janet, three of his sons, and four grandchildren.