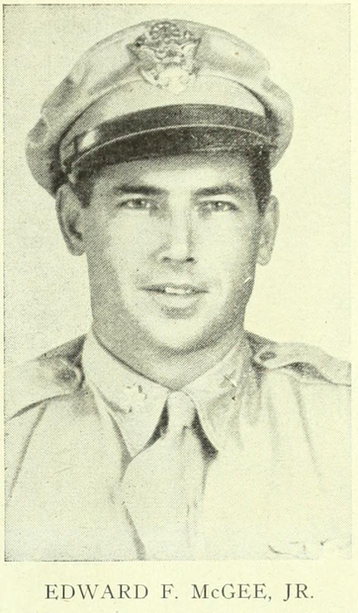 Edward F. McGee Jr. was a WWII veteran who served as a member of the US Army Air Force and piloted a B-25 bomber. After he studied in college for 5 years, he served from 1939 to 1946, and earned the rank of Lt. Colonel. In history, it is important to remember not only the big picture, but to learn the stories of individual patriots and what they did for our country in a time of need.

McGee was born in 1917 to his father of the same name and his mother, Annie McGee, on Pond Street, which is currently Commonwealth Avenue in Cochituate. Annie, and Edward Sr., met in the early 1900s and were subsequently married in 1913.1 Edward Sr. worked as an engineer, and he lived with two sisters, Doris and Rita McGee. McGee was a bright man, even from a young age, graduating from high school at age 17 and going straight into college. Edward spent 5 years in college before enlisted in the Air Force, and started a new career with the armed forces. Edward, for his service, later earned a spot on the Cochituate Jeep Honor roll in 1945, a wartime magazine for the people of Wayland. McGee’s early years were throughout the prosperous roaring 20s and, later, the Great Depression and like other Americans, was likely influenced by the culture of this time. The Roaring 20s was a time of prosperity and material wealth as well as  a new culture and entertainment, such as the new genre of music: jazz, an upbeat swing in the fast America of the 20s. With McGee’s father being an engineer and a homeowner by 1920, Edward likely had a childhood of economic security. The children of the early 20th century had different expectations than those from. From an early age, boys were taught to be outdoorsy and work with their hands. Something like The American Boys Handy Book would not walk you through the design step by step like LEGOs do today but expect you to do the majority of the building on your own. During the 30s when the Great Depression was in full force, the McGee’s likely weren’t affected much, as Edward Sr. was able to both keep his home and finish off the mortgage payments, and the family was able to send McGee Jr. to college for 5 years. Perhaps Edward visited the site of the WPA's brand-new 1935 high school, but given his girth year, it's likely he was among the very last graduates of the older building, dating back to the late 19th century.

By 1939, Edward decided to fulfill his duty as a citizen and enlisted in the Air Force wing of the Army. Air travel, especially in warfare, was a very new aspect of the military, the Air Force did not become a separate branch until 1947. Edward was sent to Tuscaloosa, Alabama as an Aviation Cadet, and by the 1940 Census he was stationed at Randolph Field in Texas, where he likely finished his training. In Air Force basic training a soldier is taught basic commands, put through physical training, and learn how to use weapons and equipment. During the Great Depression, the military was probably seen as a steady job Edward could take to ensure employment, a sense of patriotism could have motivated Edward as well. At the end of his training, Edward became a B-25 pilot. The B-25 bomber was a crown jewel of the Air Force throughout WWII, best for low level bombing runs, and the plane had the capacity to carry more than ten-thousand pounds of crew and weapons. The majority of B-25 action was in the Pacific Theater, which means he likely helped in the island-hopping campaign, where the United States captured Pacific islands one at a time in order to work their way towards mainland Japan so that they could bomb it. During Edward’s time in the war, he worked his way up the ranks until he reached the prestigious rank of Lieutenant Colonel in the December of 1945. Edward went on terminal leave shortly afterwards, and headed back home to live with his wife, Irene, and his daughter named Ellen. Edward received his final discharge papers on February 19th, 1946.

Edward McGee’s experience as a pilot proved helpful to him in finding a job after his time in the Military. Edward still had a passion for flying and post war Edward became a pilot for Shell Oil, and eventually became the Vice President for the company in the United States and internationally for over 30 years, before retiring. Edward continued to fly recreationally after the war as well. Edward’s daughter eventually had three children, which then led to an eventual eight great-grandchildren, and many nieces and nephews of the McGee family. After living a fulfilling life, he passed away on October 13th, 2001, at the age of 84 and now rests in Lakeview Cemetery in Wayland, Massachusetts.

Edward F. McGee was a man who, when given many options right out of his 5th year in college, chose to serve his country. Like many brave men in the war, Edward fought thousands of miles from home and safety to eliminate the Axis threat. It is important to remember the sacrifices made during the war, both of the living veterans and the ones who weren't lucky enough to make it back home safely – the true heroes.