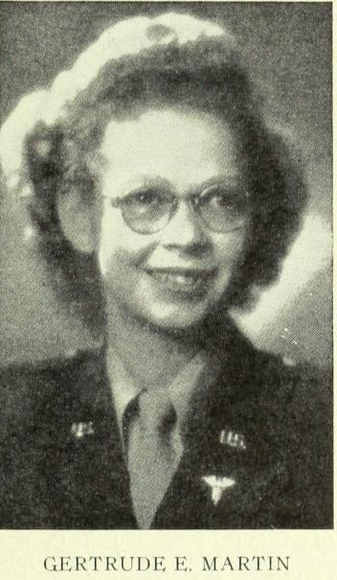 Gertrude Esther Martin was born on September 19, 1912, in St. Paul, Ramsey, Minnesota. She was one of four children born to James R. and Mabel Wood Martin. Gertrude had two brothers, Irvin and James, and a sister Shirley. Sometime during her childhood, Gertrude’s family relocated from Minnesota to Wayland, and in 1930 her family was living at 78 Main Street. During the depths of the Depression in April, 1937, her brother Irvin was tragically killed in an automobile accident and he died of a skull fracture. At age 24, Gertrude was surely devastated by the loss of her brother, and this may have scarred her for life.

Her father James was a professor at the university level, and Mabel stayed at home with her children. Academics were certainly emphasized in the Martin household, and after high school, Gertrude attended New England Deaconess Hospital School of Nursing, and by 1940, 27-year-old Gertrude was living in Boston, renting an apartment with another woman, Ruth A. Breece. Both Gertrude and Ruth were actively working as nurses in 1941 when Pearl Harbor was bombed on December 7, resulting in the United States to enter World War II.

Gertrude enlisted into the Army Nursing Corps as a 2nd lieutenant on November 18, 1942. Once enlisted, she was assigned to the 16th General Hospital out of Fort Adams, Rhode Island. The 16th General Battalion embarked from Boston and landed in North Wales. General hospitals typically held 1000 beds and were located 100 miles or more away from the front, but the 16th was part of an experiment by the war department designed to put hospitals as close to the fighting as possible. The company first arrived in Liege in October of 1944, to find that their hospital was still being set up, so the nurses had to stay temporarily in a four story building in the heart of Liege. On Armistice Day, November 11th, Hitler sent buzz bombs to the city, and many of the patients and hospital staff were killed by the explosions, with bodies being thrown 50-75 feet in the air. Although Gertrude survived, this experience must have been extremely devastating for the 32-year-old nurse.

Working conditions didn’t get any easier for nurses in the 16th battalion. The nurses had no electricity, running water, and cement flooring. Due to the heavy rains, the nurses’ feet were constantly waterlogged while working with mud up to their ankles. Gertrude and other nurses cared for their patients in dark tents with kerosene lanterns and flashlights for lighting. There was no central heating and bathrooms, so the nurses had to use buckets that were emptied by the POWs every day. German bombers bombarded the hospital with buzz bombs around Christmas of 1944 which were incredibly devastating. Still Gertrude prevailed, survived, and persisted on helping others.

The hospital was also home to many German POWs, and the biggest scare came around Christmas time in 1944, when the nurses discovered that the POWs had stashed knives and guns in their compound. It was never discovered how the POWs found the weapons, but it had to have been a scare for Gertrude and her fellow nurses. After the Battle of the Bulge, Gertrude and the 16th moved on to Northern France, where they remained for the rest of the war in the European theater.
​
After the war, Gertrude was awarded battle stars for Northern France and the Rhineland. She continued her nursing career, working in private practice in eastern Massachusetts, and choosing to remain single and in the profession for 50+ years. She spent her final years at Oakwood Convalescent and Rehabilitation Center. On May 13th, 1995, Gertrude passed away from a long-term illness at Hubbard Hospital. On May 15th, she was laid to rest at Lakeview Cemetery. Gertrude lived a life of service, always finding a way to help those in need. Gertrude embodies why World War II veterans are called the “greatest generation.” because while Gertrude probably considered her life ordinary, she was extraordinary in important ways.