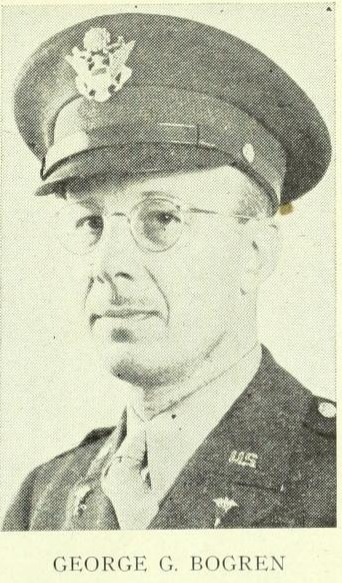 George Gustave Bogren was born on June 14th, 1900 in Wayland, Massachusetts. On that same day, 5,000 miles away, Hawaii was constituted as an organized territory by America. Later that year, the first eight major league baseball teams were officially established. America was in the heart of the Progressive era and as a result, the country was dramatically changing in many ways.

George had Swedish parents who immigrated to America in 1893, and George and his brother, Karl, were the first American-born members of their family. Their parents Carl J. Bogren and Eunice Holmstrom had four children in total: Anna Katarina Bogren (b. 1887), Nels Erik Gunnar Bogren (b. 1891), Karl Alfred Morris Bogren (b. 1897) and George Gustave Bogren (b. 1900). However there was no record of Anna Bogren living in America. Therefore it can be assumed that Anna remained in Sweden with extended family or she unfortunately passed away. The family that did successfully move to America lived at 55 West Plain Street in Wayland, MA. This family and house were solely supported by Carl who worked as a machinist.

Being the youngest of four to immigrant parents, George most likely lived a very modest lifestyle as a child. It was probably very tough for George’s father to find a high-paying job when he had just immigrated to the country. As an American-born child with Swedish parents, George must have grown up treading the line between two cultures.

At age 18, Bogren chose to leave his life in Wayland behind and registered to fight in World War I. At this point, the war was roughly four months from being over so it can be assumed that he did not participate much. At this time, as his registration card points out, he was still living with his parents in their family home on West Plain Street in Wayland. He was also working as a clerk at the Dennison Manufacturing Co. on Howard St. in nearby Framingham. After some months of serving in the war, Bogren returned home and moved into another house at 145 West Plain Street, the same road that his childhood house was on. This house was adjacent to Bogren lane which was named after George in honor of his military service in both World Wars. George attended four years of college after returning from his service which propelled him into his career as an engineer.

Bogren married Louisa Armstrong Smith in Concord, NH on June 12th, 1929. Louisa was born in the small town of North Pownal, Vermont and was two years younger than George. Louisa became a housewife as George continued to pursue his career as a consulting engineer. After a few years of marriage, the couple decided to have children. In 1935, they had their first son, Peter Bogren, then again in 1940, they had their second son, David S. Bogren. Not even two years after David’s birth did the call to serve seem imminent for George Bogren again. The Japanese bombed Pearl Harbor on December 7th, 1941, and in Wayland, George was aware that a brutal war was approaching. The United States officially entered World War II the next day and the call to serve beckoned Bogren.

With the experience of World War I under his belt, Bogren re-enlisted on October 14th, 1942 with the rank of Captain. Bogren most likely worried about the family that he was leaving behind, but as the Axis Powers quickly gained strength, the demand for American soldiers increased. Bogren was 42 years old by this time and was bound to be a mentor to younger soldiers as the average age of an American WWII soldier was 26. He left his job as a consulting engineer and was initially stationed at ORP, Carlisle Barracks, PA. Afterwards, Bogren was assigned as Base Sanitation Officer for Dow Field, Bangor, Maine until July 1943. Later, he was assigned as an Instructor and Research Worker at a Chemical Warfare Center at the Edgewood Arsenal in Maryland. This only lasted until November of 1943, when he began to prepare to sail from the port of embarkation at San Francisco in December. Capt. Bogren worked as a Sanitation Officer in the Fiji Island Command until November 1944, when he became a consultant in water supply in the Western Pacific Base Command until December 1945. During his time as a consultant in water supply, Bogren traveled through Saipan, Tinian, Guam, Iwo Jima, Ulithi, Peleliu and Angaur. Being in his 40s, Bogren was very lucky to have never see the horrid front lines of WWII. Despite this, his work with distributing the much-needed water during the island-hopping campaign was immensely valuable to the American military. Finding clean water to drink was extremely difficult for American soldiers when landing on various Japanese islands. Thanks to Bogren and his peers, worrying about obtaining clean water was much less of a problem for American soldiers fighting the Japanese.

After the war, Bogren separated from the service with the rank of Major on February 20th, 1946. He was most likely overjoyed to be returning to his wife and kids after spending so much time overseas. He was authorized to wear the following ribbons: World War I, American Theater, Asiatic - Pacific, Victory II, and a Bronze Star. He returned to Wayland and became a partner at Weston & Sampson Consulting Engineers in Boston.

Tragedy struck for George in 1958 when his wife, Louisa, sadly passed away at the age of 56 in Wayland, MA. Twenty-two years later, on November 8th, 1980 George’s elder son, Peter Bogren, died in Plymouth.

George Bogren passed away on October 28th of the year 1992 at the age of 92. Being a veteran in both World Wars, Bogren was a man who put his country’s needs before his own. He left his family and career behind in 1942 to protect the land that his parents immigrated to roughly 50 years prior.