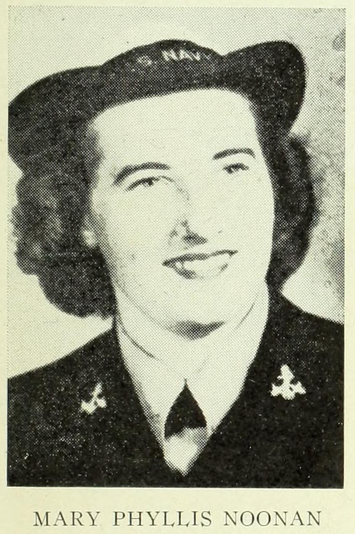 The early 20th century was an age dominated by the male and it was hard for a woman to stand out and break the mold of normality. Mary Phyllis Noonan was a woman who showed that despite societal standards of a woman, especially in a time of war, she could do her part. The acts of patriotism demonstrated by Wayland’s own Mary Noonan are notable, for she took a risk and did it for the love of country.

Mary Phyllis Noonan was born on December 6th, 1922 in Wayland, Massachusetts. Mary was born to parents James Noonan and Mary Griffin Noonan. Mary was one of four children, being the second oldest. Mary had an older brother named Thomas and two younger siblings named James and Sheila. Just as many children around the same age as Mary, she lived through and grew up during the Great Depression. The Great Depression, 1929 – 1939, was an economic depression that affected millions in the United States and much of the world, this period of gloom was mostly during Mary’s formative years as a child and teenager. As a result of the Great Depression many family’s incomes dropped as much as forty percent, many families faced a uncertainty as to when money would come again and therefore had to live a cautious lifestyle. As a result of this, Mary's family likely had to be careful about what they spent their money on including clothes, toys and household items. It is likely that Mary had to forego traditional aspects of childhood in order to help her family. Also considering that Mary was the oldest girl in the family, she probably had to spend a lot of time taking care of her younger siblings. Meanwhile, she must have been among the very first graduates at the new 1935 high school, built in the depths of the Depression with WPA funds.  Despite the hardships of the 30s, Mary’s family remained in Wayland for the next twenty years.

As tensions rose in Europe and war began to approach the United States, more dark times would have tremendous impact on Mary’s life. Almost Mary’s entire family joined the war effort in some way, and it was only natural that Mary do the same. Both her brothers, Thomas and James, spent their time in the Navy and despite the tragic losses of the war, both came back healthy and alive. As a woman, Mary could not choose to go into combat as part of the war effort, so she instead worked at a war telegraph center, the Eastern Sea Frontier Headquarters located in New York. At this specific facility, Mary worked alongside other people, mostly women, taking in messages and trying to decode them. As Mary approached her early 20’s, she joined the women's navy group, Women Accepted for Volunteer Emergency Service, or WAVES. WAVES was a group created by President Franklin D. Roosevelt at the beginning of WWII as a result to free up males in the war for the sea duties, and for the women of the program to fill their on-shore jobs. Prior to Mary becoming part of WAVES, she attended a basic training boot camp for the program at Indiana University. Mary, and the rest of the women in WAVES greatly impacted the war with their generous and patriotic contributions. Although Mary worked with the WAVES, her real interests were in aviation. It was probable that Mary continued her studied in aviation and communications after the war.

After the war was over, Mary married her husband, Paul Edwin York, in 1944 in Virginia. Paul fought in Iwo Jima and it was likely that the two met because of their connection to the war. Despite previously living in Wayland, Paul and Mary moved to Indiana. Shortly after moving to Indiana Mary gave birth to her and Paul’s son, Edwin. After the birth of Edwin York, the York family moved to Kentucky. As Mary continued her domestic life in Kentucky, she likely missed working, and to entertain and interest herself, studied aviation. Although it seemed like Mary and Paul were a happy couple, they later divorced, and Paul remarried. Mary began to move on with her life but just ten years later she passed away on January 4th, 1970, in Columbus, Ohio.

Today, it could be easy to assume that since Mary was a woman and wasn’t overseas on the front line like other Americans, she was a not a contributor to the war effort. However, Mary helped the war effort in many ways like working at the war telegraph facility and joining the WAVES. Mary Noonan’s war story shows how women's contributions to the United States throughout the largest conflict in history made a difference despeite the roadblocks in her way, and for this we honor her memory.