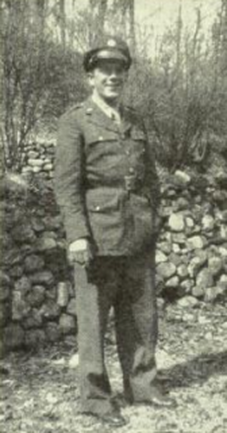 Amidst the fight for women’s rights, prohibition of alcohol, and other prominent movements during the lively Progressive Era, Russell Thompson Bowles was born on April 2nd, 1913. Son to Thomas and Laura C. Bowles and the youngest brother of two older sisters and one brother, Isabella, Emmaline, and Thomas W., Russell T. Bowles arrived during a time of change in America and as tensions grew overseas to the impending Great War. By the time he was five, one of the greatest and most gruesome wars ceased, but little did he know that within two decades, another world war would ensue and this time, he would be one of the 16 million ready to serve his country.

Growing up with three siblings, there was never a dull moment in the household on French Ave in the small town of Cochituate. Russell likely had many neighborhood friends such as the Shays and Treadwells, who had children around his age. Russell’s mother, Laura, did not work and therefore took care of the kids and taught them many things at home. Russell only received an education up to 8th grade which was not uncommon for many children in working class families. Russell’s free time allowed him to have a lot of opportunities to pursue other fun activities such as making a kite, fishing, and other hobbies of a young boy in the early 20th century. However, by the time he was 17, Russell was able to acquire a job as a contractor’s helper, similar to his father’s job as a teamster in the contractor industry.

In the 1920s, during Russell’s early childhood years, the Temperance Movement finally succeeded, and prohibition took into effect. Although it didn’t affect Russell personally and many people found ways to break the law, he grew up in a time where America was considered to be “roaring” and many reform groups were flourishing. However, as the 1920s drew to a close, the Bowles family, along with a million others, came face-to-face with one of America’s economic crises: the Stock Market Crash of 1929. It is unknown how the Depression affected Russell or his family, but based on the increased unemployment rates, and poverty, they likely felt the consequences.

Eventually, with the helpful encouragement of President Roosevelt’s fireside chats, Russell and his family were able to overcome one of America’s greatest crises. In their hometown, in fact, the WPA's multiple work projects helped citizens out, whether it was the new 1935 high school, laying new water pipes in Cochituate, or devoting funds to deal with the Gypsy Moth scourge. However, yet again, tensions began overseas as Hitler and the Nazis rose to power and started invading neighboring countries, including the 1939 invasion of Poland. Soon, it was clear that the United States needed to prepare for war so President Roosevelt, through his Fireside Chats, started encouraging young, able men to enlist armed forces. Inspired by his President, who the pople trusted throughout the Great Depression, Russell knew that it was his civic duty to serve for his country.

Standing five foot three inches and only 108 pounds, Russell enlisted into the Army on April 1st, 1943 in Fort Devens, Massachusetts, over a year after the Peral Harbor attack. Russell knew that his father wanted to help his country during World War I, however, due to his age, he was unfit for the draft. So, in his stead, Russell decided it was his time to fight for his country.  On April 8th, 1943, Russell was drafted and was assigned to the Infantry Replacement in the Army. From there, he went to South Carolina where they stripped him of his daily wear and replaced them with uniforms, preparing him for the rigorous training ahead. In these boot camps, Russell, along with thousands of new recruits, likely learned to work together as a well-oiled machine, spending hours working on their physical endurance and mental stability. After six months of training, Russell was sent to take part in the Italian campaign, which consisted of Allied operations around Italy starting in 1943. It is likely Russell participated in the Allie’s Operation Grapeshot, the final attack of the Italian Campaign, which ended on May 2nd, 1945, with the formal surrender of German forces in Italy. When the war later concluded, Russell along with hundreds of thousands of other American soldiers, returned home to the states. Upon his arrival, Russell was promoted to Captain at Camp Blanding, Florida.

Russell was discharged from service on November 26, 1945. He was well decorated by the time he finished his duty as he was awarded many ribbons such as the American Theater ribbon, the European-African-Middle Eastern Ribbons, the World War II Victory Ribbon, and the Good Conduct Ribbon. He was also awarded the Combat Infantry Badge. After his service, Russell decided to settle down and married Catherine Reimer and became a plumber. Russell and Catherine lived a happy, modest life throughout the years after the war. Times were good in the 1950s where the United States’ economy was soaring in post-war positivity. Russell and Catherine did not have any children to pass down his stories, and on October 18th, 1968, Russell passed away at the young age of 55. Russell T. Bowles’ efforts on the battlefield helped the fight for democracy and should be both remembered and honored.