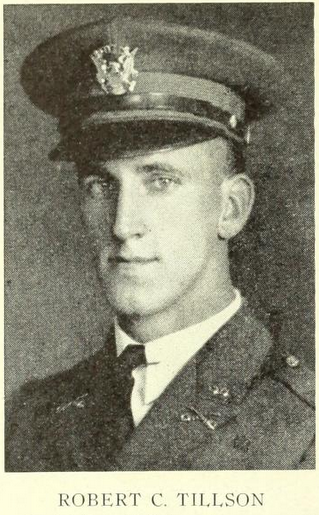 Robert Connor Tillson was an outstanding, decorated soldier who fought on the front in France, Italy, and Germany. He gave up his life and future for the sake of his country and earned five ribbons for his service. Even if he was not able to return home after the war, his sacrifice inspired the Wayland community for decades to come.

Robert C. Tillson was born on October 27th, 1919, in Plattsburg, New York to Charles B. Tillson and Georgena J. Tillson. Shortly after his birth, the Tillson family moved to Wayland, Massachusetts and lived on West Commonwealth Road. Charles was a farmer, so the Tillson family was likely a lower class family of Wayland. Robert was the youngest of his three children; he had two sisters, Ena M. Tillson and Chloe E. Tillson, and one brother, Charles B. Tillson. Growing up during the “Roaring Twenties,” Robert and his siblings likely had an easygoing, enjoyable childhood, filled with all the latest toys and appliances that money could buy. They would’ve never worried about whether they were going to have food on the table or new clothes for school. When he was older, Robert attended public school, and in his history classes, he likely learned about the wild actions of “the Cyclone in the White House,” Theodore Roosevelt. The Great Depression of the 1930s began around his middle school years, and during his teens, Robert’s life likely became drastically different than it was when he was a kid. His father likely had a lot of trouble on the farm, and Robert and his siblings would’ve taken up some work of their own to help pay the bills.

After graduating from Wayland High School, Robert attended the Massachusetts State College in Amherst, Massachusetts (now known as UMass Amherst). He probably worked extra hard in high school so that he would be eligible for a scholarship; while Wayland as a town was pretty well off financially, the Great Depression would have made paying a full college tuition a tricky maneuver. In college, Robert majored in Avian Pathology, and in his free time, he participated in Cross Country in the fall and Indoor Track in the winter. While some of Robert’s older siblings may have socially restrained in college, the Prohibition Reform Movement had ended a long time before Robert was in college, so he was free to go have a good time if he wanted to. After an amazing four years at UMass Amherst, Robert graduated in June 1941, and soon after graduation “Skip” began his military career.

Robert started active duty on July 16, 1941, and he was moved around to and from various United States forts/camps during his service on the mainland. He began at Fort Myers in Virginia as a 2nd Lieutenant in the Cavalry. In the Cavalry, Robert learned how to fight on horseback, a very challenging task. Even so, he likely excelled through his trademark hard work and dedication for he later obtained his first position as Officer of the Light Machine Gun Platoon of Troop E. Robert must have been highly regarded because his first assignment was to guard the President, obviously a very important task. Robert continued his training at the Cavalry School at Fort Riley, Kansas in January 1942, and after this, he spent three months at Fort Oglethorpe in Georgia. From there, he traveled to Fort Benning in Georgia where Robert’s talents were acknowledged and he was finally transferred from the cavalry to the armored forces. Now that he was training with more modern war techniques, Robert joined the 3rd Tank Battalion and he transferred to Fort Knox in Kentucky. Here, he worked tirelessly for three months. Soon after, Robert returned to Fort Benning where he stayed for eight more months.

While these few years might seem hectic and only focused on training, Robert took a break during his stay at Fort Benning and traveled back to Wayland where he married the love of his life: Wilma Annetta Thompson, on October 1, 1942; he was 22 and she was 25. After the wedding, he returned to Fort Benning for the rest of his eight-month stop, and from there he proceeded to Nashville, Tennessee for a three month stop. After Nashville, Robert spent around a year at his final military station, Camp Gordon in Georgia. Afterward, Robert was sent to the front line of battle.

Robert left the United States from New York in September 1944; he was sent to Italy for a secret mission. Along with his service in Italy, Robert was in combat in France and Germany as well. He was a well-trained soldier, but things turned sour when Robert was injured for the first time in France. The injury took place on November 24, 1944. After the fact, Robert was an inpatient in an England general hospital for two months. Even after being hurt and likely experiencing symptoms of PTSD, Robert still returned to the front during the last part of February 1945. However, this would prove to be the most fatal choice of his life; shortly after rejoining the war, he was gravely injured in a push to clear the Saar Basin Sector in Germany. While Robert was marching from Trier Germany on March 9, 1945, an extremely important message was received that needed to be delivered as soon as possible to the Commanding Officer, who was at the head of a column of vehicles. The message was so vital that Robert felt the need to deliver it himself, rather than entrust it to one of the regular messengers. He successfully transferred the message to the officer, but on his way back to his position, Robert was hit and tragically killed.

While we’ll never know what was in that message and why it was so important, the repercussions if it weren’t delivered have made Robert’s sacrifice worth it. When he died, Robert was awarded the Purple Heart, Italian Campaign, ETO, American Theatre, and Pre-Pearl Harbor ribbons. Everyone around him was deeply affected by his death. Robert was never able to drink a beer with his dad, play cards with his friends, or kiss Wilma ever again. Robert and Wilma never got to become parents or grandparents. He sacrificed his future for the well being of his country without a second thought. Now, his body is located in Hamm, Luxembourg, where it will rest forever. While Robert may have been forgotten by some, for those who read this biography, allow his story to inspire you to embody his altruism and inspire other soldiers to be just as brave as Robert was. This way, Robert Connor Tillson will never be forgotten.