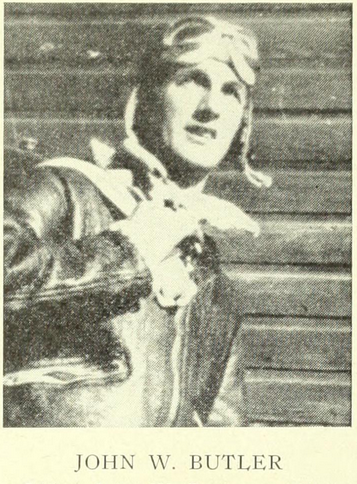 John William Butler was a Staff Sergeant in the Army Air Corps during World War. John was in many ways a remarkable soldier; a working class kid who grew up during the Great Depression and a young man of World War II. Both of these events would have had a tremendous impact on him and his future. However, even with his impressive service record he was also in many ways the quintessential American man of his time.

John, or "Johnnie" as he was later called, was born on the 18th of March, 1921 in Boston, Massachusetts and was the first son for John P. Butler and Gertrude J. Butler. He had three siblings, Charles E. Butler, born in 1924, Eleanor Butler, born in 1926, and Lillian J. Butler, born in 1927. He enjoyed his childhood living and growing up with his family in Wayland, Massachusetts. His mother was a homemaker, staying at home to raise John and his siblings. His father was employed as a trucker and was a veteran of World War I.  John was born just thee years after the end of World War I and his father, a veteran of this war, would leave a mark on John during his formative years. Perhaps he grew up hearing stories of American heroes fighting the German enemy, stories that would no doubt have shaped his world view.

Like most boys of this period John was raised to be handy, strong, and independent, in other words to be traditionally masculine. This was an important aspect of John’s life; his father was a World War I veteran and a working class man, so it is not unreasonable to suspect that lessons on traditional masculinity did take a role in John’s upbringing. However, these values of masculinity would not have been as influential as they might have been in an earlier period. John was born just as the Roaring 20’s were getting started and the Progressive Era was ending. The world that John was greeted with was in a golden era of economic prosperity and social and technological advancements. During these years there was a sudden availability of commercial and electric goods, due to the increased wealth of the average American. John would likely have spent his early childhood around new and exciting technologies, getting used to the newfound economic prosperity of the area. The Roaring 20’s also came along on the end of the Progressive Era, so growing up John would have been born in a world where the government had started to modestly regulate businesses, women had gained the right to vote, and numerous other differences brought along by the Progressive Movement. For John things like this would have been a fact of life. While not quite as solidified as to someone born today, for John things like women’s suffrage would have just been the way things were for as long as he could remember. This no doubt this era still had some effect on John, particularly as Franklin D. Roosevelt took the presidency when John was merely 12 years old. By the time FDR had died, John would have seen this president for half of his life, and the entirety of his voting career.

On the 1st of September 1939, World War II broke out in Europe when Germany invaded Poland. However, for John and most Americans, this conflict was distant and did not involve them. As far as they were concerned the conflicts of countries on the other side of the Atlantic had little effect on them. For the most part they would have been right, at least until the 7th of December in 1941 when the Japanese bombed Pearl Harbor. This attack came out of nowhere, a complete surprise attack that took the country by storm, an attack that the US could not go without a retaliation. The next day the United States formally declared war on Japan, entering World War II. John decided to enlist in the U.S Army at Fort Devens less than a year later on August 1st, 1942 at the age of 21. He joined the U.S. Air Corps, becoming an aerial gunner on a B-25 Bomber. Despite the U.S. having joined the war in order to retaliate against Japan, John would never fight in the Pacific theater and instead would complete 25 bombing missions over Europe. The war deeply affected John and was a large part of his life all the way up to his death. But fighting in a war was not the only aspect of John’s life during this time, as he would wed Doris Ella Maitin on the 28th of April, 1944.  While it’s likely they married due to the worry that John could die in combat, the marriage was a strong one that would last until John’s death. Also at this time John’s family in Massachusetts no doubt became involved in the war effort as well. His little sister, Lillian Jean Butler, even became a reporter for the locally famous famous wartime newspaper, The Cochituate Jeep! The three year span that John was in the army certainly held a lot of significance to the life of John Butler. At the time of his honorable discharge in 1945, John had attained the rank of Staff Sergeant, and was a veteran of  25 bombing runs: 13 over Germany, 9 over France, and 3 over Italy. In addition, he was confirmed as having shot down a German ME-109, a very impressive feat given the success that that type of plane experienced in combat. For his ability, success, and bravery John Butler was granted the Distinguished Flying Cross, the Air Medal with 3 bronze oak leaf clusters, meaning he was awarded the Air Medal three additional times, and the ETO Ribbon with three Bronze Stars.

After having been honorably discharged from the U.S. Military John W. Butler returned to civilian life in Massachusetts where he would live out the rest of his days with his wife, Doris. While he did not stay in Wayland for all of his years, he did remain in Massachusetts for most of them. During his life he would have two children, Robert Allen, born in 1955, and James Paul, born in 1956. His last recorded occupation was a truck driver, and it is not too much to assume that he remained so until his retirement as job hopping was not too common for that generation. He would remain in Massachusetts until his retirement sometime in the 1980’s, when he would move to Destin, Florida with his wife. Unfortunately tragedy would hit when his youngest son James passed away in 2001, but John would go on for another three years before passing away himself on the 14th of March, 2004. He is buried in Oxford, Massachusetts in a grave that lets all know of the remarkable service achievements that John William Butler had gained in his military career. He was survived by his wife, Doris, and eldest son, Robert.