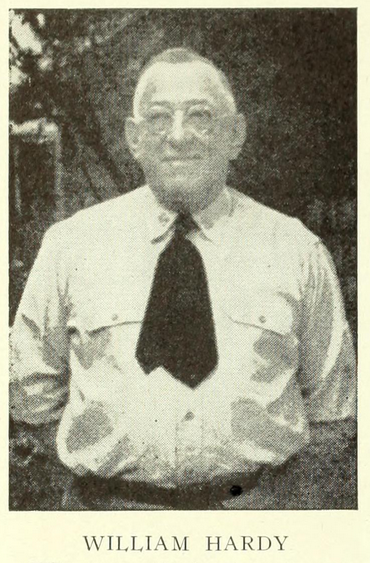 William “Bill” Hardy was the epitome of an American hero, yet this hero was born on foreign soil. Within a year of immigrating to the U.S. from Scotland, Hardy volunteered to fight in the Spanish American War. Bill continued his military service in WWI, and later came out of retirement to return to active duty in WWII. Bill dedicated his entire life to military service. Bill Hardy’s story illustrates the large role that immigrants played in American military conflicts, and the countless contributions they made to preserve American values.

William Hardy was born in Scotland to Henry Hardy and Annie Kerr in 1880. Due to the fact he was growing up in Scotland in the late nineteenth century, very little is known about Bill’s childhood, but it is clear that he was eager to get out into the world. He immigrated to the U.S. when he was just 18 years old, possibly looking for a taste of the American dream and a better life. When Hardy stepped foot onto the “land of opportunity”, he likely realized that he wasn’t the only one looking for a change; America was in the midst of a vast reform effort known as the Progressive Era. The Progressive movement aimed to eliminate problems caused by industrialization, urbanization, immigration, and political corruption. The outcomes of this movement transformed America and likely had an affect on the rest of Bill’s life.

It wasn’t long, less than a year after arriving in the U.S., before Bill enlisted to fight in the Spanish American War. Bill was likely exposed to American newspapers’ use of “yellow journalism” to boost circulation and their twisting of the USS Maine explosion that contributed the U.S. declaring war on Spain on April 25th, 1898. Hardy was among the 979 men that enlisted in the 1st Maine Volunteer infantry. On May 27th, 1898, the regiment traveled south to Camp Thomas in Chickamauga, Georgia and was assigned to the Third Brigade, Second Division of the Third Army Corps. Throughout the summer, conditions at the camp began to worsen as the camp reached a population of thirty thousand men. With inadequate sanitation and supplies, disease and infection rose to alarming proportions. By the end of July and into August, the U.S. Army began relocating regiments to other, more healthy sites. On August 13th, the U.S. and Spain reached an armistice, effectively ending the war's fighting, and on August 23rd, the regiment was ordered back to Augusta, Maine. Bill’s specific war stories have been lost, but his experience undoubtedly influenced his viewpoint on both WWI and WWII.

After the Spanish American war, Bill continued to serve as a member of the Military and Naval Forces on the USS Albany in San Francisco, California. A few years later, Bill married Grace Mellen on March 23, 1913 in Boston, Massachusetts and the couple settled in Dorchester. Grace was born in Worcester to parents William R. Mellen and Catherine G. Curley. Almost immediately after their marriage, Bill was transferred to Turkey. After remaining there for three and a half years, he returned home. Bill and Grace then settled down in Cochituate, Massachusetts, and Bill got a job as a mail clerk. They had four sons, but records indicate that their son Henry may have passed away when he was a teenager. Like many American families, Bill’s was hit hard by the Great Depression, and, in 1930, Grace’s parents, William and Catherine Melton, moved in with Bill and Grace in their home in Cochituate. While we don't know for sure, this may have been because they were unable to support themselves financially. William Melton worked as a machinist, and like many Cochituate residents, he likely worked in the nearby Cochituate shoe factory. Some time between 1930 and 1940, Grace’s mother, Catherine passed away. Her death, along with the economic devastation brought by the Depression, made this a difficult time for Bill and his family.

When the U.S. joined the side of the allies in WWI on April 6th, 1917, William Hardy had already been stationed in Turkey for three and half years as Chief Boatswain's Mate of the USS Scorpion. When his time in Turkey was up, Bill traveled across Bulgaria, Serbia, Austria, and Germany to his destination of Denmark. Through his travels, he was able to experience the conditions of the Central Powers first hand. Hardy was detained by authorities in Dresden, Germany under the suspicions that he was an “Englander”, most likely because of a probable Scottish accent. Hardy was repeatedly questioned from 9:00 in the morning until 3:00 or 4:00 in the afternoon. However, one day, the head of the Secret Service Police told him he did “not look like such a bad man,” and gave him 12 hours to leave Germany. Hardy returned home in search of “quiet work,” where he then became a mail clerk.

Bill was retired when the Japanese attack on Pearl Harbor launched the U.S. into WWII.   Hardy was called back to active duty during on August 20th, 1941 as a CBB (the Construction Battalion) for the U.S. Navy. He was assigned to Deer island as a gunnery instructor and served there until he was discharged on September 14th, 1945 as a Chief Warrant Bosun. Fort Dawes was the World War II Coastal Artillery fort located on Deer Island. Fort Dawes was significantly expanded leading up to the start of WWII. These expansions included fire control stations, radar sets and four new gun batteries. Bill was likely involved in these projects when he worked as a CB. Fort Dawes was constructed to defend Boston Harbor in case WWII fighting reached the mainland. Fortunately, the Allied forces defeated the Axis Powers before the fighting reached U.S. soil.
​
Bill Hardy returned home on September 14th, 1945. He passed away only 11 years later in 1956 when he was 76 years old. His contributions to the Spanish-American War, WWI and WWII earned him various military ribbons, medals, and stars. Bill Hardy repeatedly risked his life to protect and uphold American values; he is one of many immigrants whose story should serve as a reminder to the American people of the countless contributions that immigrants have made to American military conflicts and the essential role they have played in making our country what it is today.