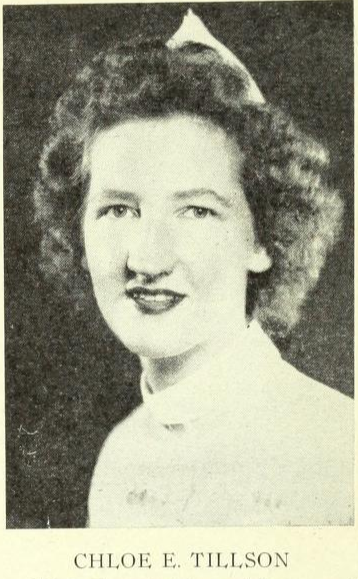 November 9th, 1912: the Carlisle Indians--a college football team lead by star athlete Jim Thorpe--played West Point, a team which included future President Dwight D. Eisenhower.  Eisenhower forced a fumble after tackling Thorpe. Out of college, Eisenhower went on to become a five-star general and the first Republican nominee to win the election since Harry Hoover in 1928.  Although Eisenhower’s play was significant in this big game of rivals on November 9th, there something else special that happened that day.  Chloe E. Tillson was born in Morris, New York.  She went to school and grew up with her three siblings, Ena, Charles, and Robert, and was raised well by her parents Charles and Georgina.  She spent her entire childhood in New York and didn’t move to Massachusetts until adulthood.  The highest level of education Tillson completed was her second year in college.   Following her education, Tillson became a dental nurse.

As Chloe turned 21 years old, a fateful and ultimately devastating development took place: Adolf Hitler was appointed chancellor of Germany in 1933, and as we all know, began targeting millions of people, mainly Jews and anyone else he saw as “weak” or disabled compared to his ideal Aryan race.  At this time, the United States was enduring the Great Depression, when a poor economy and the great stock market crash of 1929 caused millions of people to be evicted from their homes and lose their jobs. Six years later, the Germans invaded Poland in 1939, and Chloe Tillson was quietly living with her family in Wayland on West Cochituate Road.  Following the invasion, the French and the British declared war on Germany, but the US claimed we would remain neutral until the Japanese attacks on Pearl Harbor in December of 1941, thus leading to the Island Hopping Campaign and eventually to the US bombings on Hiroshima.

Tillson stayed away from the war and continued her regular life until Valentine’s Day in 1945 when she left her dental apron at home and picked up a uniform in olive drab.  Before going to the Army hospital, Tillson was trained in Fort Devens in central, Massachusetts.  Upon her arrival, she was on general duty at Lowell North General Hospital.  Following that, she left for Camp Stoneman in California on April 25th, 1945.  There was a serious need for psychiatric nurses, but Tillson didn’t enter that ward in her duration of time. Following her training, she was sent to Luzon, a populated island in the Philippines, and stationed at the 314th General Hospital Manila, the nation’s capital city.  There was no combat in this zone, but Tillson aided soldiers who had been on the front lines of the action. Tillson was just one of the 59,000 to have served in the Army Nurse Corps in World War II.  Nurses were stationed all around the world and spent their days on the sea, land, and in the air in order to mend the wounds of the fighting soldiers.  World War II was the deadliest war in history, and there were casualties anywhere from 70 to 85 million people, including her brother, Robert C. Tillson.  There can be little doubt that Chloe and her folks were absolutely crushed when the Army Captain, who was expected to survive after his injury in combat, passed away on March 9th, 1945.  He was a Captain in the Army 3rd Tank Battalion, 10th Armored Division, received a gold star in the Cochituate Jeep and nominated a Purple Heart soldier.  Meanwhile, Chloe Tillson received the Asiatic-Pacific, the Philippine Liberation with two stars, as well as the Victory ribbons.  Tillson was discharged on February 1st, 1946, once the war had already ended and had aspirations of working as a nurse in a veterans’ hospital.

After the war, Tillson returned home. Her family ran Tillson’s Farm from their home and sold poultry.  The family business had chickens and sold farm-fresh eggs from a roadside stand.  Tillson was married to Gordan Hart, changing her last name, and eventually adopted three children during the baby boom generation, Susan, Robert, and Brad. Tillson passed away in 1996, and is buried in Vine Lake Cemetery in Medfield, Massachusetts.  Tillson’s life of 84 years without a doubt had much purpose, and she lived through both world wars as well as the Cold War. She saw America decline as well as prosper after the Second World War.  Her contributions are significant even though she remained in the Army Nurse Corps for only just under a year. Her hard work and talent helped save and assist the lives of many suffering soldiers.  Chloe E. Tillson was certainly impactful on both our community and the country.