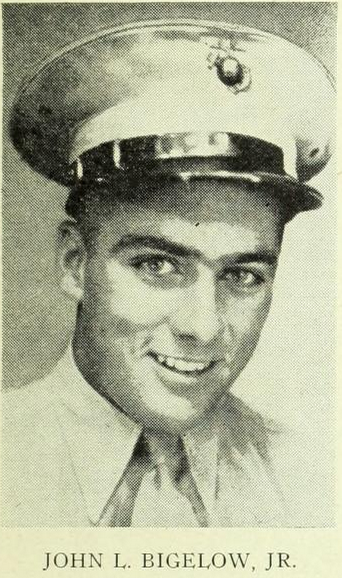 John Leroy Bigelow Jr. was a Marine who served on the famous USS Hancock aircraft carrier for over two years in the South Pacific. Like millions of other boys across the country, as he grew into a young man, his mindset shifted overseas with the soldiers fighting a savage war by the time he was thirteen. As a child, Bigelow didn’t know what was to come, but in a few short years, he would be making a name for himself as the Hancock faced battle after historic battle in the Pacific.

Bigelow was born on July 8, 1926, and raised in Wayland, Massachusetts. As a young boy in the late 1920s and early 1930s, Bigelow likely spent his time in ways similar to the American Boy's Handy Book projects, like devising games and making slingshots, as well as fishing and swimming at Dudley Pond. As a young child, the Great Depression was in full swing and Americans across the country were forced into poverty. It is very likely that his parents were affected by this nation-wide conflict, as so many families were at the time. However, despite any of their struggles, he remained an every-day kid in the Boy Scouts, a relationship he sustained for over 73 years! Although he was not old enough to be a senior Scout before the war, it is possible that his own Scout leaders were involved providing services to relief agencies and the Civilian Conservation Corps for the Great Depression. Bigelow was too young to be apart of any New Deal organizations in the 1930s, but he might have known some young men who were whisked away to learn labor skills in efforts to steer them away from crime, and he very likely attended the brand new, WPA-constructed 1935 high school.

Before Bigelow was two months into his thirteenth year, WWII broke out, sending millions of young Americans into battle. By November 1942, the minimum draft age was lowered from 21 to 18, but because to serve in the Marines, one had to volunteer, we know this is what John did.  After boot camp the 18-year-old was assigned to the USS Hancock aircraft carrier in August 1944. The Hancock earned itself four battle stars throughout the course of its travels in the South Pacific. The Hancock and Bigelow saw many battles together, including those in the Philippine Islands, the Ryukyu Islands, Formosa, French-Indochina, Indonesia, Japan Homeland, and Volcano Islands.

On March 3, 1945, Bigelow was off the coast of Iwo Jima on the Hancock; at this point, he had been in the Southwest Pacific for almost a year. Only a few months earlier, on February 19, 1945, Bigelow was apart of the important isolation of Iwo Jima when the Hancock launched planes, hitting the Japanese Naval Bases of Chichi Jima and Haha Jima. The battle of Iwo Jima was a major turning point in the war so it is outstanding that Bigelow was able to assist in some way. Further, on April 7, 1945, the Hancock was struck by the notorious Japanese Kamikaze suicide planes off the Western coast of Okinawa. Of the 71 wounded men, 62 of them were injured. Bigelow was a blessed survivor of this incident.

Only highlighting two major events the Hancock underwent, Bigelow was more than just your average soldier, receiving ribbons in American Theatre, Asiatic-Pacific with five stars, Philippine Liberation with two stars, and Good Conduct and Victory medals. Bigelow not only helped the US attain victory but survived the many life-threatening situations that were inevitable during the war.

Beginning after his discharge on November 15, 1945, Bigelow’s post-war life was no less fulfilling than his war times. After living with his parents for a period of time in West Medway after the war, in 1946, Bigelow married who would become his sweetheart of 64 years, Dorothy Ames Bigelow. Additionally, he was a very involved member of his community and was passionate about many things in life. Bigelow was able to continue his role as a Boy Scout until the day he died, earning himself the title of Scout Leader, Scout Master, and Committee Member. On top of this, he also earned himself the Boy Scouts District Merit Award and the Silver Beaver Award. The Merit Award is chosen at a district level, while the Silver Beaver award is decided upon at a national level and is presented by councils. On top of this, he was a generous man, volunteering as Santa for the Boy Scouts for 20 years, and also as the Santa for the Medway Parade.

Bigelow was an avid outdoorsman, especially drawn to camping, fishing, canoeing, and swimming. Along with Bigelow himself, Ernest LaCasse and Bigelow’s brother-in-law, Donald Lee, all co-owned the Fort Hill Express trucking company. Bigelow was also apart of the Medway Auxiliary Police and Civil Defense, earning himself the Distinguished Citizens Award in 1971.

John was Catholic and very involved in the church; he was a committee member of the Medway Community Church, and he volunteered his service as Collector, Building and Grounds, Chairman of the board of Deacons, and the Executive Board. He also worked annually at the Chuck Wagon and the Church Fair with his son, John.

Bigelow and Dorothy had a big family with two daughters and two sons. Their son, John, married a woman named Cindy, their other son, Donald, married Barbara of Falmouth, their daughter, Dorothy Skog, married Richard, and their last daughter, Joanne Lesiak, was unmarried and the only child to leave Medway (lived in Hopedale). Bigelow’s parents, John Leroy Bigelow Sr. and Doris M. (Powell) Bigelow, also had a daughter. John Jr.’s sister, Nancy Lee, married Don of Mendon and gave Bigelow and Dorothy their beloved nieces and nephews. John L. Bigelow Jr. died from cancer on March 3, 2011, with seven grandchildren, nine great-grandchildren, and an extremely fulfilled life to remember him by.

John Leroy Bigelow Jr. was not only a veteran involved in many of the war's most famous historic moments, but above all was clearly a family man. There is no doubt that he saw things in his time on the Hancock that many of us can’t even comprehend. However, still being a very young man after his discharge, he was able to continue his life and fill it with loved ones and purposeful activities. Bigelow was a local man, but one that should not be forgotten.