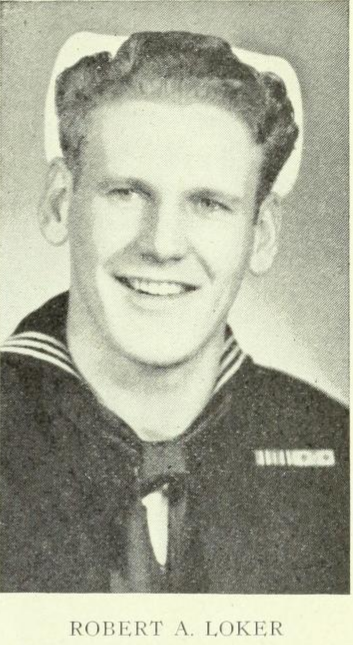 Robert A. Loker enlisted in the U.S. Navy in 1941 and fought from 1943-45. Although Robert was just one man out of millions of soldiers, a dive into his life story allows us to understand that without the ordinary man who was willing to sacrifice his life during WWII, our country may not exist as it does today. It is this fact that makes people like Robert’s story so important to remember, because the sooner we forget their stories, the sooner our country loses the heart and courage to defend its nation again. As a sailor in the Pacific Theater, Robert served on the most decorated battleship, the USS North Carolina. Robert and the USS North Carolina significantly affected the outcome of WWII, specifically, the war against the Japanese. Had ordinary men like Robert not had the willpower to risk their lives to defeat the Japanese, the entirety of the war could have been altered.

Robert A. Loker was born on July 24, 1923 in Framingham, MA.  The “Roaring Twenties,” as they are often called, was a time where the American economy was booming, and mass consumerism became a nationwide phenomenon. The ’20s brought popular things like Jazz, movies, and radio into existence. Closer to home, Robert had an older sister named Bertha C. Murphy (born in 1903) and an older brother named Granville F. Loker (born in 1913). Robert’s mother was Lillian M. Loker, and his father was Melville A. Loker, a farmer and train car conductor born in 1878. The Loker family lived in a farmhouse on 29 East Plain Street, Wayland, MA.

Robert grew up during the Prohibition era but was likely not affected directly by it, as the movement ended by the time he was 10 in 1933. However, Robert was a teen during the Great Depression (from 1929-1939), one of the darkest points in U.S. history.  As most families were, Robert’s family was likely affected by the Depression; Robert’s father was a modest train conductor which was a good mid-level job. Robert likely had to create his own fun during this time, so fashioning his own toys, fishing, and swimming would have been a large part of Robert’s childhood.

Robert and his family made it out of the Depression, perhaps helped along by FDR’s “New Deal”. People were encouraged to put their money back in the banks and to join one of the many government labor programs designed to help citizens get back on their feet (for example, the Civilian Conservation Corps (CCC)). The Great Depression existed from Robert’s ages 7-17, but the CCC lasted until 1942 when he was 19. Robert unlikely worked in the corps but he definitely knew of it. Around this time is when Robert likely gained an understanding for who Hitler was and the atrocities the Nazi Party was committing in Europe.

On December 15, 1942, one year after the attack on Pearl Harbor, Robert, then 19, quit his job as a truck driver to join the Navy. He trained for eleven weeks at the Great Lakes Naval training station before he was sent to the U.S.N. Radio School at the University of Wisconsin.

In August of 1943, Robert was assigned to the USS North Carolina battleship. On this historic ship, he fought in the Pacific theater during the island hopping campaign until the end of the war. The USS North Carolina played a large role in the attacks on the Japanese home islands, most notably was the battle of Okinawa. Robert traveled the Pacific on the USS NC, nicknamed the “Show Boat,” for two years and took part in eleven operations. From these eleven operations, he earned 12 battle stars for his courage and bravery. The North Carolina participated in every major battle in the Pacific Theater and earned itself the name of the most decorated battleship with 15 battle stars.

The impact that the North Caroline had on the war cannot go unrecognized, as the ship survived the duration of the war despite needing serious repairs. Without the strong-willed and skilled soldiers representing the US on this battleship, the she could have easily succumbed to Japanese pressures, thus, shifting the momentum of the war. The ship is now one of the most famous WWII battleships in the United States and is still available for tours North Carolina.

In 1952, Robert received a Mason membership card, acknowledging his membership to be a Freemason. To become a Freemason, which was an exclusive club, there are certain requirements: “Be a man. Have a sound reputation, and be well-recommended by your peers. In most freemasonry jurisdictions, you must believe in a Supreme Being, regardless of your religion, and be over the age of 18 years.” This likely speaks to Robert's character and community leadership, as he was clearly more than just a decorated soldier in his home life.

Eventually, Robert then moved to Clermont, Ohio where he peacefully lived out the rest of his days until his death on July 25, 1982. Robert is buried in Cincinnati, Ohio at the second largest cemetery in the US. We thank him for his service.