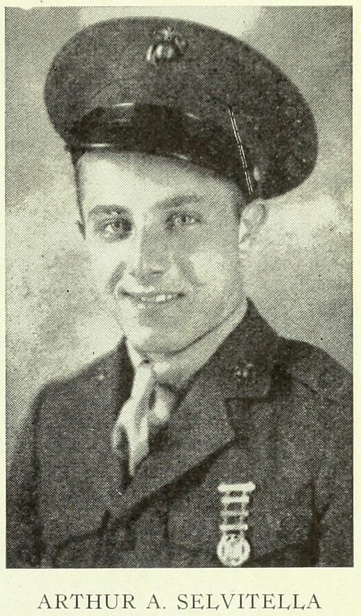 Current generations will never be able to fully understand the struggles and pressures that those living in the first half of the 20th century had to face, but we are able to come close without actually having to live through those events by closely examining the life of one man who lived through it. Stripping out all finite details, the life of Arthur Anthony Selvitella could be used as an outline for almost every boy born in the 1920’s: too late to know WWI and life before the Great Depression, but instead raised right into the heart of a time of suffering, and then cast into the brutality of the Second World War. Born into a period of growth and reconstruction after "the war to end all wars", he was a child raised both by the pride of being a part of one of the newly considered most powerful nations, as well as by great caution and awareness on account of the devastation of WWI. For a few years after his 1923 birth, this would be the mindsets of his parents, Sebastian Selvitella and Anna M Vozetla, but Arthur himself would not remember this “peaceful” time. Instead, all Arthur would remember from his childhood was the devastation that the country was thrown into, later named the Great Depression. The life of Arthur Anthony Selvitella is one that thousands of men shared across America and even the world during the early 1900s.

Arthur was born September 13, 1923, and for many years of his childhood, he remained at 93 Charter Street in Boston, Massachusetts. He was the eldest of 3 siblings, and the only boy of them all. While he lived in Boston he also shared a home with his mother's brother, who, just like Arthur's dad, was a veteran of WWI. Some time near the end of his early grade school years he must have moved with his family into the small town of Wayland; it isn't documented that he specifically attended Wayland High School, but he is repeatedly mentioned in other war veterans letters, marking him as one of their “old school chums.” He did attend and most likely graduated high school, but it was during a time of great stress in America. Still, compared to many across the country, Arthur may have suffered somewhat less, but still would have felt the full force of the Great Depression. A third-generation immigrant, both his mother's and father's parents immigrated to the U.S. from Italy. As they settled down in Massachusetts, there would not have been much money between them. Despite this lack of initial wealth, Arthur’s father persevered and created a strong economic base for Arthur to grow up with as an auto mechanic, a profession which at the time was in high demand. Learning from his father's ways, Arthur also found a job to support the family, joining the International Engineering Works in Framingham as a crane operator before he entered into the war.

Arthur’s life as a crane operator was not a lasting one though; the events of December 7th, 1941 shook the country and sent it spiraling onto a path that was seemingly inevitable. Men all across the country around Arthur’s age were faced with the terrifying truth of their future and major decisions that had to be made quickly. For some, the war was the only option, for others it was to go on to college, but Arthur neither joined the war right away nor did he attend college before the war.  Arthur instead spent a little under a year still in Wayland, most likely preparing himself for what was to come. Growing up with the stories of war from his father and uncle, he never would have believed that he would have to face the horrors they could barely describe, so he would have wanted time to prepare to witness those himself. He and his two sisters must have gone to dances and the park and would have had plenty of nights out in the town before they were to be split up. Finally, on September 18, 1942, Arthur joined the US Marine Corps, and thus began his journey into the war. Upon joining the Marines, Arthur was sent first to Dunedin, Florida for his initial training. He most likely made many friends during his training as the charismatic and cool soldier his future brothers-in-arms described him to be. After graduating as a crew chief through studying the mechanics and operations of amphibious tractors, Arthur was finally shipped out to the Aleutian Islands in Alaska, a distant outpost where the Japanese had sent ground forces. He spent the next 20 months in the Amphibious Tractor Battalion, waiting for his call to the front lines.

Finally in January of 1944, Arthur's journey into hell began as he was first stationed in the Solomon Islands for some time, but soon joined the island-hopping campaign, and made his mark at the battle of Iwo Jima. As he stood on the black scorched banks of the island, and as he huddled in shelter with his fellow troops, Arthur would have thought about his times at home, about the safety of his family, and of what was happening now, as he later wrote back to his father: “yesterday I received a new town paper. [The Jeep] I think it is great. Who thought of it? Good work. Keep it coming. That’s the kind of stuff we boys like to get.” Arthur received a bronze star and even a presidential citation for his bravery and going above and beyond during this bloody battle, but none of that would be enough to compensate for the immense heartbreak he had to endure while losing his closest friends, one of which being another Waylander, George Fullick.

Arthur was discharged on December 2nd, 1945, a first class private in the Marine Corps Class III, and a recipient of the Asiatic Pacific, American Theater, and Victory ribbons. He did his best to return to a normal life, just like the one he had left seemingly so many years ago. Settling back down in Framingham, Arthur sought to continue in his education and attend a university to rejoin the rest of the world in his learning. As was happening throughout America with the so-called “baby-boom,” Arthur most likely sought to find a partner and permanently settle down to get the horrors of war truly behind him, and further the Selvitella name.
​
Arthur Anthony Selvitella died on July 20, 1988, a day that took with it the life of an American patriot and Marine. Arthur may have died on that day, but we hope that his memory will live on in Wayland and beyond.