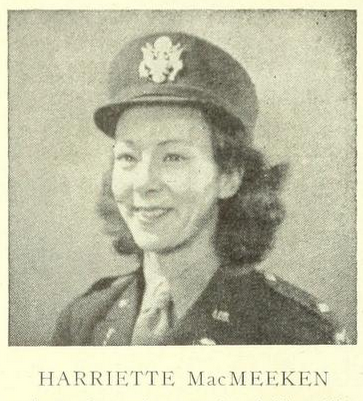 Harriette Elizabeth MacMeeken was a minority in a field dominated by men.  As a nurse who voluntarily enlisted in the US Army during World War II, she exemplifies the changing roles for women brought about by the war's circumstances.  She was an notable figure in the 1940s, and helped save the lives of soldiers fighting against fascism.

Harriette came into the world on a warm, sunny day in 1922, just as the Union of Soviet Socialists Republic (USSR) emerged, and the rest of the world was strengthening and developing powers that would soon explode into war. Compared to the post-WWI chaos overseas, Harriet was living on a calm farm in Massachusetts, protected and shielded from the world’s evils. She grew up in Wayland on 38 West Plain Street, living with her mother, father, three sisters, and one brother. She most likely did the things typical kids living in the 1920’s did, whether that be learning how to paint with watercolors, or crafting a fan, or making an at home gymnasium, and if she was like most girls of that era, keeping busy with chores. She spent most of her time with with her four siblings, probably being closest with her older sister, Mabel who was two years older than her, and her brother David, 2 years younger. She also had two other sisters, Mary, four years older, and Eleanor, four years younger. While Harriette was developing into a well rounded young woman, she attended the Cochituate School where she was able to further her understanding and knowledge of the world. She graduated Cochituate School in 8th grade, the year 1935.

Just as Harriette took a step in her education, her beloved mother Mabel passed away on October 24th, at the young age of 41. Sadly, she died from general septicemia, a result of bacteria in the blood caused from severe infection. Her death took a big toll on not only Harriet, but also her whole family. Their mother was obviously one of the most important parts of their family. Especially because her father, William, who participated in the First World War, worked hard as a plasterer at a refrigeration plant to make enough money to support the family. Harriette likely had to help raising and being with her younger siblings, therefore developing a close relationship with each of them. A few years after Harriette graduated from the Cochituate School, she moved onto a new stage in her schooling and traveled to Concord, New Hampshire to make a new life for herself, and develop a new career as she grew into a young woman. When she was eighteen, she lived in New Hampshire where she enrolled in a nursing program, and in the next year, in 1942 she became a nurse at the New Hampshire Hospital. A few years after perfecting her skills of nursing, she enlisted in the Army on May 23, 1943.

On the day, May 23, 1943, Harriette MacMeeken’s life would be forever changed by her experiences in war. She would likely see and deal with things that no training could ever cover. Just after the day the Allies bombed Sicily and Sardinia Italy, she first joined the forces. Harriet was located at Fort Devens in Massachusetts, which served as a place for training not only three important divisions, the 1st, 32nd, and 45th, but also the Fourth Women’s Auxiliary Corps (WAC) Training Center that opened the month before Harriette was stationed there. A few months after, while Harriet was still at Fort Devens and most likely part of the WACs, it became the Women’s Army Corps (WAC) which started spreading nationally. She soon became the 2nd Lieutenant, representing her power and her passion in her duties. At Fort Devens, Harriet took a huge step in furthering her training and gaining exposure to the chaos of the war that she would soon enter into. On April 7th, after spending a year at Fort Devens, she was transferred to the 136th Station Hospital in Abilene, Texas where she completed training that strengthened her abilities as a nurse, because this hospital was known to have good resources. In September of 1943, the 136th Station Hospital opened in Suffolk, England, because there was a severe need overseas. Harriet traveled to Suffolk, and was inserted in the midst of war in the United Kingdom. Only a year after she enlisted in war, and only a year after she had completed basic training, she was in an unfamiliar country in the middle of mayhem. Harriette had to learn fast, assuming that once she got to the United Kingdom, she immediately treated patients. Harriette went from being on duty in the Station Hospital in England, to Scotland, and finally Wales. Harriet was most likely tending to soldiers in Wales after the Cardiff Blitz. Cardiff, Wales was bombed by the Nazi German Air force, killing and wounding hundreds of people that Harriette could have helped during her time in Wales. It seems probable that some of the wounded from the D-Day invasion, June 6th, 1944, also ended up in Harriette's care.

While Harriette was in Suffolk, England, she met a fellow who would soon become her life-long partner. Melvin Connor was a soldier stationed in England, and perhaps she met him when he was one of her patients she was tending to. Just a few months after Harriette was in England, and met Melvin, they were married in Suffolk, England. They were young and in a love that would last well beyond the war's conclusion. A year later on December 15th, 1945 Harriet was discharged as the 1st Lieutenant. Her officer status shows her commitment and will to complete her duties in the best possible way she could. After she returned from war, she settled down with her husband in Texas. Harriette didn’t have much of her family left in Massachusetts because her beloved sisters Mabel and Mary had died while she was in the war. We don't know the extent to which her father was involved in her life, but she had a new life elsewhere, and Harriette didn't to return back to her childhood town. The records run dry after the war, so we hope that Harriet spent the remaining years of her life with her husband in Texas, finding there to be peace and happiness.