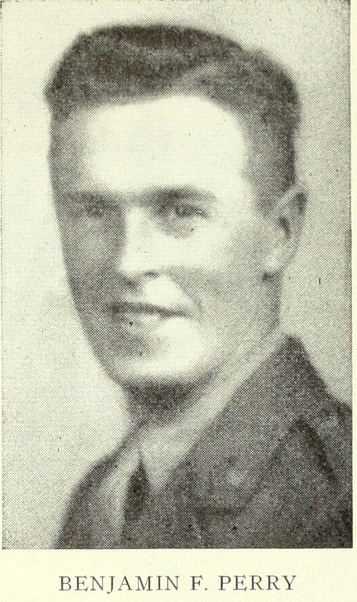 World War II saw many great men make many noble sacrifices, as it truly was the "greatest generation". However, that generation is slowly fading with every passing year.  As members of the Wayland community, it is our duty to make sure that the men and women’s war stories live on after them. Benjamin Perry’s journey into the Second World War is one of great sacrifice and nobility. He was one of the few members of Wayland who laid his life down for our country, and for that, it is imperative that his story lives on.

In February 1919, Benjamin F. Perry was born into a society that was just beginning the long process of recovery from World War I. Benjamin knew nothing of the horrors that met many of the young men across the world, as the first world war ended before he was born.  But the effects of the war would have a grip on him for his entire life, just like many others at this time. As a young adult, Benjamin Perry’s mother, Nora Kain, boarded a ship and made the voyage to America. On May, 29th 1910, an Irish vessel by the name of the Parisian departed from Galway and docked in Boston. Four short years later, at the age of 26, Nora married Benjamin's father, Walter, who worked as a machinist at the Waltham Watch company. After getting married in 1914, Nora and Walter had seven boys; William, Benjamin, Wilfred, John, Francis, Robert, and Norman. The Perry family owned a house on Rice Road in Wayland, where the boys surely would play football, make slingshots, play outside, and enjoy life in the small quiet town of Wayland. When Benjamin was entering his teenage years, America was falling deep into the biggest economic depression in U.S. history. After the “roaring” 20s, America was left with an inflated stock market that resulted from the normalization of investing by the middle-class population. People investing in businesses is typically a good thing; however, people’s lack of knowledge on where to invest their money led to overinflated businesses. It was only a matter of time until the bubble popped. Once this happened, the banks followed suit and soon a quarter of all Americans found themselves out of work and out of money. The Perry family likely felt the repercussions of the Great Depression just as countless other families; however, Wayland also saw some of the benefits that the “New Deal” brought to Americans. Organizations like the Civilian Conservation Corps (C.C.C) and the Works Progress Administration (W.P.A) had great effects on the people of Wayland and most likely the Perry’s themselves. The C.C.C. was an organization that targeted young men who were at risk of committing crime due to the poor economic climate and put them to work to teach them to be honest members of society. If one of the Perry boys was looking for work, it would no doubt have been through the C.C.C. The W.P.A also contributed to Wayland’s infrastructure, as it built a high school, installed pipes in Cochituate, and installed the Dudley Pond beach. As construction on the high school finished in 1935, it is likely that more than one of the Perry boys attended school there. The 30s were also a very important time for other countries, especially in Europe where the fallout of World War I was in full force. In Germany, civil unrest, bolstered by the restrictive and harsh nature of the Treaty of Versailles, led to the rise of a new leader in Adolf Hitler. Of course, it would be years until Hitler’s name would become somewhat of a curse word among Americans and Allies alike.

Tragedy struck on December 7th, 1941 when Pearl Harbor was attacked by Japanese pilots in a preemptive strike against the United States. One day later, the U.S. declared war on Japan and found themselves entering the WWII. This declaration of war brought young men all across the country to join up to fight off the fascist regimes that threatened the very freedom of the U.S. One of these men was Robert T. Perry, who joined up on December 13th, 1941. Unlike the rest of these brave young men, Robert Perry had 6 brothers who joined him in fighting off the fascists. One of these brothers was Benjamin Perry, who joined the Army before his brother on May 3rd, 1939. When he first enlisted, Benjamin was ranked as a private first class in the 329th “Buckshot” Infantry Regiment in the 83rd “Thunderbolt” Division. His division was reorganized at Camp Atterbury and put into active service on August 15th, 1942. On April 6th, 1944, the HMS Samaria, a British Transport carrying the 329th Infantry Regiment, embarked for Britain. The famous 83rd Division was then involved in a number of battles and played a role in the invasion of Normandy. Benjamin was not in one of the first waves to storm the beach; however, his infantry regiment found themselves fighting viciously through the hedgerows in early July, just a month after initial contact was made on the beachhead. It all started on July 4th, when the 329th Buckshot Infantry regiment got orders to fight their way through the hedgerows as part of a three-pronged attack. Facing heavy gunfire and a barrage of mortar fire, American troops fought their way through the harsh swamp lands that made up the area. German soldiers “possessed every favorable factor” as they held an advantageous position over the American troops. The 329th suffered many casualties during this fight, as soldiers and battalion leaders were shot down trying to cross the swamp to gain ground on the Germans. Benjamin Perry fought valiantly alongside his fellow troops in these crucial battles. Although they were the harshest and most brutal, the first weeks of fighting after the Normandy invasion were integral to an Allies' victory. As the vicious fighting continued, American casualties climbed. Among the long list of young American men who gave their lives in battle, lies the name of Benjamin Perry. Benjamin died on July 8th, 1944, fighting through the hellish landscape of Normandy, near the town of Sainteny.
​
After his death, Benjamin Perry was buried in the Normandy American Cemetery in St. Laurent, France. For his bravery and sacrifice, Benjamin was posthumously awarded a Purple Heart and several battle stars. These awards were, of course, accepted by Benjamin's family, who were no strangers to military service, as all 7 of the Perry brothers served in the military to some degree. Although Benjamin was the only one to lose his life in battle, several of his brothers including William, Francis, and Wilfred suffered multiple battle wounds. Words cannot begin to describe the sacrifices made by the Perry family. Giving up just one son to go off and fight in a war is enough to tear up most parents; the idea of sending all seven of their children off to war must have been unbearable for Mr. and Mrs. Perry. In their collective memory, we dedicate this work.