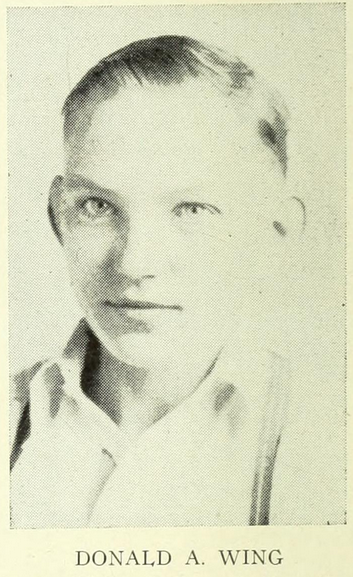 Donald A. Wing, one of Cochituate’s World War II veterans, may not have been a famous wartime hero like George Washington or Ulysses S. Grant, but Wing still made the ultimate sacrifice in order to protect his country. Born in 1923, Wing prematurely lost his life in 1942 at Camp O’Donnell after contracting malaria during the notorious Bataan Death March.

Born to Louis and Catherine Wing, Donald and had a brother named Ralph who was three years older. Louis Wing was a painter who had not fought in World War I. Donald and Ralph likely grew up without the war stories that some classmates' fathers shared. By 1940, both Wing children were living in different households. Ralph and another lodger lived together in the house of Ina L. Davis and her daughter. Donald had gone from living on rented land for forty dollars a month, to property worth $3300 with his foster parents, Lillian and William Henry, as well as their five children consisting of two older brothers, two older sisters, and a younger sister. All the kids in the household were within a five year age gap, which hopefully made Donald’s transition away from his birth family a bit easier, as he would have many people he could turn to as he got settled in his new environment. Since his foster brother, Louis Henry, was the same age, both Donald and Louis dropped out of school at the same time and worked the same job, suggesting the two were probably very close. An interesting fact about his foster parents was that they were born in Canada, meaning that they may not have had the same sense ofpatriotism for the United States that other parents had and likely did not push for war. Although Wing was not alive long to fight in all the famous battles, his legacy ought to be remembered, as he is a perfect example of a typical boy who went off to war and never got to grow up into a man.

Born as the Progressive Era was coming to an end and after World War I, Wing was born into a completely different world than the generation before. Wing did have a radio in 1930, so he may have been aware of current events as a child. Depending on when he moved houses, there is a good chance he would occasionally listen to FDR’s fireside chats. While Wing was only about six when the Great Depression started, he must’ve felt the economic repercussions during holidays when he didn’t get many presents or when there was just enough food to go around. While it is unclear exactly when Wing was taken in by the Henry family, it is likely his new family had a bit more economic stability since they were willing to take in another child. Together, the four working members of the family earned about $2,640 each year, with the head of household, William Henry, bringing home the most money at $1,300 a year for his steelworking job in the railroad industry. While this may not seem like much, it translates to about $47,850 today, and in those days solidly middle class. While three of the kids did have to work to help earn this money, including two employed by the New Deal programs, this amount of money likely would have been enough to support the family.

Wing did not attend school in March of 1940, and the highest education he had received was 9th grade. In his foster family, Anne was the only one still attending school and she was a sophomore. The highest education was held by Anne and Doris, who had made it to the second year of high school, denoted H2 in the 1940 census. However, Donald was not just twiddling his thumbs at home, like many teens today would if they didn’t have school. Instead, he worked as a brush piler with his brother Louis. While they only received $360 a year for their work, it was much better than what they would’ve had if FDR had not created the New Deal. Donald and Louis were among the 2.5 million men aged 17 to 25 who were employed by the Civilian Conservation Corps (CCC). Since this program paid the men $1 a day for their work, it is likely that Donald and Louis each worked most days of the year. No matter how enjoyable the work was, it’s hard to  imagine working for a whole year with few days off, which were likely spent with family over the holidays. Donald’s family members also probably worked through the winter, which would have been quite cold in Massachusetts.

Interestingly, he joined the army before the events at Pearl Harbor, which was the catalyst that kicked off American attention and action in the war. According to The Cochituate Jeep, Wing joined the military in September of 1940 as a “mechanic with the Army Air Corps, on the Bataan Peninsula, in the Philippines, where Gen. Douglas MacArthur’s forces made their gallant stand to delay the Japanese…” At one point, he “sailed from Fort McDowell on August 13, 1941 and was sent to Pampanga Island in the Philippines where he was assigned a mechanic in the aerial squad.” Before falling ill, Wing had been a private first class, which is the second lowest rank. Having enlisted nearly a year and a half prior, Wing’s luck had ended after Corregidor, when he was forced to walk in the Bataan Death March. Imagine how miserable it would be, walking over 60 miles in the hot, sticky weather getting brutalized along the way. The soldiers marching alongside you dropping dead mid stride from hunger, thirst, or fatigue. Based on traditional Japanese beliefs of bushido, the prisoners did not deserve respect, so Japanese soldiers committed widespread atrocities, even if the prisoners did nothing wrong. In the meantime, you are itching from mosquito and other bug bites. You see one biting your leg, but don’t bother to slap at it. What’s the point? You’re tired and already itch all over.

After marching for six days, Wing was likely exhausted and thankful to have finally stopped walking. But the days ahead were far from easy. The prisoners of war were herded into cramped boxcars, and even once they arrived at Camp O’Donnell, people continued to die every day. As described by a man who was also on the march, Camp O’Donnell had “long bamboo huts and one spigot of drinkable water for the entire camp, which held about 7,000 Americans.” The food consisted of watered down rice that they got to eat once a day, and if the prisoners did not bow to the Japanese, they would be clubbed. The barracks were not large enough to house all the prisoners, so some would have to sleep outside, even in the rain. Not only did Wing face the harsh conditions of the camp, but his health was deteriorating as well. He probably had the typical fever and chills of a malaria patient, a pounding headache, overwhelming nausea, and muscle fatigue. It is hard to know whether Wing would’ve even considered the fact that he had some illness, as he’d likely felt many of these symptoms during the march due to fatigue and lack of food. Even if Wing had tried to see one of the American doctors, there were no supplies that could help him. As there wasn’t much to do, Wing probably sat with the others, feeling worse and worse, until about a month or so after the march, when he died on May 12, 1942 in Camp O’Donnell on the Philippine Islands. He lies in a “hallowed grave on Luzon” at the Manila American Cemetery in Taguig City. His early death date rendered him the first son in Cochituate to be killed in combat.

While Wing himself did not have a post-war life, his memory lived on in the minds of his family and within the community. His foster mother, Mrs. Henry, received a war bond in his memory. The family continued to live on 18 E. Commonwealth Road, but missed the presence of their foster son. Even though there were many other kids in the household, Donald surely left an empty space in the family.

Donald Wing may not have been able to start a family of his own, but each and every American owe a debt of gratitude, not only to this man, but to all the United States soldiers who have ever fought to protect the future of democracy. It is important to try to get as much information about World War II experiences as we can before the dwindling population that fought during that time completely dies out. We can use a wide variety of primary documents to help learn things about these veterans, but undoubtedly gaps will be left and inferences will need to be made. While some made it home and got to share their war stories, many did not make it home safely, and it is our responsibility to tell their stories for them.