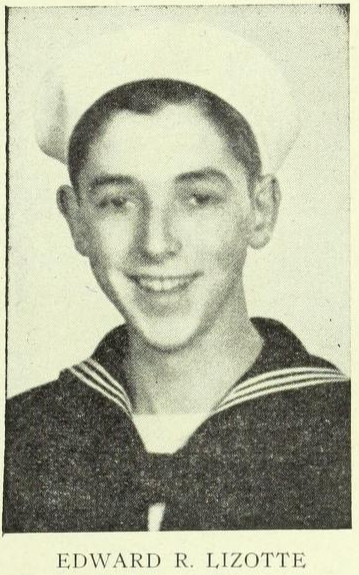 Every veteran has their own unique story and through the use of today’s information trackers, my history class put our best foot forward to tell the story of different veterans lives in Wayland. In my opinion, this project opened up a world that displayed the heroes of Wayland that we never truly knew about. Edward R. (Robert) Lizotte was one of those heroes.

Edward R. (Robert) Lizotte, was born on July 26th, 1925 in the town of Framingham. His parents Roxanna (Rose. A) and Alexander J. Lizotte moved to Cochituate in 1910 to start their family. Both of Edward's parents were originally from Canada. Edward was the youngest child in the household with two older siblings, Albert J. and Rose Alma. Living in a full house with parents, siblings, and grandparents, Edward led a busy life style. After living in Wayland for most of his teen years, Edward entered the Navy as an 18 year old to begin his aid to the country.

During Edward’s early childhood, Wayland struggled through the Great Depression, which affected millions of Americans. People were dependent on government-sponsored rations and had very little money. During the Depression, Roosevelt put the New Deal into play. The New Deal included new programs for citizens. The WPA - Work Progress Administration - that sponsored projects that paid people a small amount of money and got them out of their houses and working. In fact, the new 1935 Wayland High School that Edward later attended was just such a WPA effort.  Another program was the Civilian Conservation Corps (CCC), with a goal to help young men to develop good working habits during the time of high unemployment. It was a fear that teenage boys would become derelict and violent if there wasn’t some sort of structure and a job for them to fulfill. It is very likely that Edward’s older brother had the option at some point to work with the Civilian Conservation Corps.

While there was a national movement to get citizens working again, Edward spent most of his childhood times playing and growing up. During this time little boys were expected to play around in the mud and make their own fun. Due to the Great Depression, there was not a lot of extra spending money to buy toys for children. Being the youngest, it was likely he was expected to achieve the same that his siblings had achieved. It can be assumed that Edward had some healthy competition with his older brother and his parents probably expected him to keep up to the standards his brother held. During Edward’s late teen years, he most likely became aware and learned about Hitler and felt it was time to take action. He also might have felt pressure to enter the war because all of his friends were doing the same thing.  Edward played tennis at Wayland High School, and was perhaps was thinking about getting a job or entering college until the war struck and everything changed.

As Edward approached his older high school years, he likely heard stories of the war that made him realize it was his time to enlist and help out the country. Edward must have felt compelled to help out because he didn’t even wait to get his diploma, but instead received it after the war. Edward could have also felt pressure from his father to join because Alexander was also registering for the war as an older man (58 years old). Edward’s war years came with many trials and battles. He joined the Navy, and eventually moved to a different position in the Coast Guard as a Seaman first class. He was inducted at Fort Devens and officially went into the Navy at the beginning of World War Two. His first station was in Brooklyn New York, where he attended boot camp. Soon after he was sent to San Francisco, where he was assigned to the USS LST 760. The USS LST 760, was assigned to the Asian-Pacific theater. LST stands for "Landing Ship Tank", large ships that would literally beach in support of an amphibious assault, open their bows up, and unload heavy cargo.  Edward was seen battling in the Philippines, Okinawa, and Iwo Jima. He also participated in the escort to Tokyo. The battle of Iwo Jima was 36 days long and resulted in more than 26,000 deaths. Even more devastating the battle of Okinawa, which lasted 82 days and endured some 62,000 casualties. With his many battles, he was no doubt a dutiful soldier.
Edward's war years must have been very hard on mother Roxanna and sister Rose Alma, a daughter was named after mom. I would guess that during WW2, Roxanna and maybe even Rose Alma, became working women. During WW2 an increased number of women began to work alongside men who were not in war because the US needed to increase weapon production. With men out on the front lines, women had to step up and help. When WW2 ended, women generally went back to the domestic sphere.

After WW2, Edward received his diploma from Wayland High School and decided not to attend college. Instead, Edward worked at the Deal and Wendell Shoe Factory in Holliston, following in his father’s footsteps. Edward never married, but instead spent time with his community and doing volunteer work. He also spent a great deal of time with his family (parents, siblings, nieces, and nephews, etc.) and volunteered at Leonard Morse Hospital, and spent much of his time helping out and visiting patients. Edward also worked as a catakist for Saint Ann’s and St. Zepherin's churches in Wayland, serving the people around him. In Edward’s later years he moved to Natick and lived on 12 Cedar Avenue. Most war veterans at this time came home, got married, and soon after had children. Even though Edward did not take this path, he was no doubt surrounded by the influences of the baby boomer generation, a group of people that were born from around 1946 - 1964. During this time, people were having a lot of children at a very rapid pace, and this was probably apparent to Edward during this time. In the later years, as his health declined, he moved into Mary Ann Morse Nursing and Rehab Center where he spent the final part of his life. Edward died a peaceful death, on December 20th, 2011.

Edward lived a seemingly normal life from the outside. However, when you take a deeper look, you discover Edward actually lived an extraordinary life, fighting for his country and trying to get by any way he could. Edward was a good citizen who should be honored.