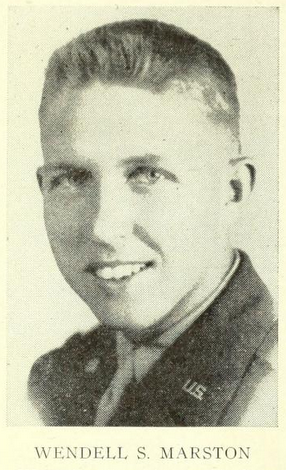 Wendell Stewart Marston was born May 11, 1921 in Framingham Massachusetts. He represents the “Greatest Generation” that joined up in the spirit of patriotism, loyalty and the righteous war against fascism around the world. His time in the war shows the spirit and bravery our soldiers fought with every day of the war to keep America safe.

Wendell Marston, or "Wendy" as his Cochituate pals called him, flew over 140 missions out of the Pacific Theater, and his short but intense time in the Army Air Corps is a perfect example of a typical Air Force deployment in World War II.

There's no record of Wendell Marston’s parents attending formal school early in their lives. His father, Arthur, was a carpenter, and his mother Edna, like most women at the time, was a housewife. He had two brothers, four and seven years older than him. His mother also served time as editor of The Cochituate Jeep, the wartime publication so central to this study.

Marston grew up in Wayland, Massachusetts on Shawmut Avenue. It was expected that young boys his age were to be rough and independent. Wendy probably spent much of his time fishing, exploring, and having as much fun as he could. Growing up in the shadow of two older brothers, Wendell would have probably aspired to be in the military for a long time, to serve his country and his president, and to make a space in the world that was his own. His older brother Bill was also a decorated First Lieutenant out of the European Theater who served for four and a half years.

When the war began for the United States on December 8th, 1941, Wendell Marston did not immediately join up. Instead, he waited six months, and volunteered on March 22, 1942, just two months shy of his 21st birthday. He enlisted in the Army Air Force, at the time a subset of the Army, and immediately began his training. He was assigned to pre-flight training in Alabama and then graduated from Mariana Army Air Field in Bascom Florida. He received his silver wings on March 25, 1943. From there he completed airline pilot training in Denver, Colorado and flew with the Ferry Command out of Memphis, Tennessee, ferrying American aircraft to Great Britain.

Late in the war, on January 31, 1944, Wendell Marston shipped out of Miami as an airman for the China Burma India (CBI) theater. Marston flew a total of 145 missions in the area as a First Lieutenant, including many missions over “the Hump", one of the most notoriously dangerous routes to fly in all of WWII. Airmen in the Hump flew out of Assam, India to Kunming, China, over the Eastern end of the Himalayan Mountains. For multiple reasons, the Hump was an astonishingly difficult and dangerous task, in which a total of one-third of airmen died in the course of their time flying the route. Their basic mission: to get supplies to Chinese forces fighting against the Japanese occupiers.  In addition to the Japanese Zero’s (fighter jets) that constantly dogged the path of the pilots, the most dangerous factor of the route was the weather. Pilots would be forced to fly along at 30 miles an hour ground speed while getting pushed between 30,000 and 6,000 feet. Several specifically difficult sections of terrain were notorious for taking lives of the uncommonly “green” CBI pilots. As well as many factors vying for the death of the airmen, there were no search and rescue missions for the route, which added greatly to the high mortality rate.

The extreme conditions and high death rates of the Hump were only justifiable because of the value it served to the war effort. The central mission of the operation was to supply the effort of Chiang Kai-Shek in the Chinese counteroffensive. While the US attacked Japan from the East in their island-hopping campaign, the Chinese resistance occupied millions of Japanese soldiers to the West. The job of the men flying the Hump was to supply American AAF units stationed in China to keep the fight alive and allow the American side of the war to continue to be successful. In the case that America went with the option of invading China with 5 million American soldiers, the effort in China was going to be entirely vital to any survival of an American invasion. Although that option was never pursued, the pre-existing American invasion was also crucial to the effort to gain the upper hand, which would not have been successful without a consistent Western distraction. Without the presence of the Chinese resistance, the Island Hopping campaign would have been much more difficult. Without the men flying the Hump, the Chinese resistance would have withered and died for lack of equipment.

Wendell Marston received two battle stars for his time in the CBI theater, as well as the Presidential Citation for his unit. This most likely meant that in his time flying over the unpredictable and dangerous Himalayas, he at several times had Japanese fighter pilots at his tail, attempting to gun him down. It is entirely remarkable that through 145 missions Marston managed to survive and return home.

The Hump was not the only place Marston flew, however, as he ferried many casualties out of Burma during the war as well. At the end of his surprisingly short, yet incredibly action-packed deployment, Marston returned to the States on March 29, 1945. Upon returning home, Wendell Marston had to say “this is the day every guy overseas dreams about.” He and his fiancee, Doris Chaput, were married only five short days after his return. After his marriage, he shipped out to Mississippi for a month of specialized training and then moved on to Great Falls, Montana, where Doris joined him. In Montana, he flew many of the fastest planes owned by America at the time ferrying American soldiers to Alaska to supply the Russians. After his short stint ferrying soldiers, he got placed on a military transport line between Dallas, Texas and Tucson, Arizona before receiving his discharge and being placed on inactive service on November 27, 1945.

After he was discharged in 1945, Marston moved back to the Northeast. Not much is known about his post-war time, but that he received his discharge in New Hampshire and at some point returned to Boston, where he died almost 50 years later, August 14th, 1991. Wendell and Doris had two children together and lived out their time until Marston’s death.

Wendell Stewart Marston represents the “Greatest Generation.” He was born in 1921 and was a young child through the Great Depression, probably seeing Franklin Roosevelt as a father figure along with most of America. At the young age of 20, he joined up in service of his country and fought long and hard for its freedoms. Like many other young men, upon returning to America, he married the girl who must have been his high school sweetheart and was patiently awaiting his return. He then contributed to the “baby boomer” generation just like millions of other young men and women, leaving his mark on the Earth in as many ways as he possibly could.