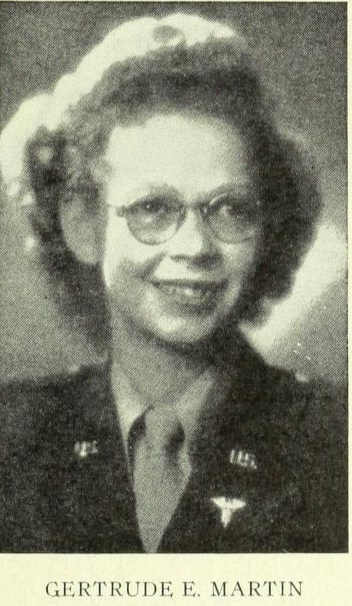 In World War II, Gertrude E. Martin was one of many nurses who were able to help save the lives of countless U.S. soldiers. She was also able to help with the difficult task of establishing a bigger role for women in the workforce. Gertrude was born to James and Mabel Martin on the nineteenth of September, 1913 in Ramsey, Minnesota. Her father was a professor at a university. Gertrude had three siblings: Shirley, Irvin, and James Jr. Before Gertrude was seven years old, she and her family moved to Belmont, Massachusetts, where her father taught at a business school. In the coming years, the family moved again to Wayland, Massachusetts, where Gertrude attended school through her teenage years. The Martins lived on Main Street near Lake Cochituate, where Gertrude likely would have swum with her family and friends on hot days. In 1922, Gertrude was learning in a combined fourth and fifth grade class containing roughly thirty other children. Four years later, Gertrude received a diploma to commemorate her eighth grade graduation.

In 1931, Gertrude graduated high school and started training at Deaconess Hospital to become a registered nurse. Despite having trained at a hospital, she began her career as a private duty nurse. Private duty was the practice of nurses being hired directly by patients. Gertrude would often stay in the home of a patient and care for them for the duration of their illness. While Gertrude only cared for one patient at a time, she was prepared to help that patient twenty-four hours a day, seven days a week. Gertrude likely made approximately $25 a week for her tireless labors, but her wages dropped hugely during the Great Depression. Patients were more likely unable to pay her for her work. As a result, perhaps Gertrude felt the sting.

By 1940, Gertrude had ended her work as a private duty nurse and started a job in a hospital. Over a period of a year and a half, she worked thirty-two weeks and made $1,000, a dramatic increase from the wages she had received for private duty. In 1941, the United States entered World War II and citizens across the country looked for ways to help the cause. On November 18th, 1942, Gertrude decided to join the Army Nurse Corps (ANC) where her talents as a nurse could help the war effort. Gertrude was among more than 50,000 other nurses who joined the ANC in the four years after Pearl Harbor. Gertrude started off as a Second Lieutenant at Fort Adams in Rhode Island, where she was assigned to the 16th General Hospital. Gertrude was then sent to Fort Devens in Massachusetts, where she received training to work overseas. The 16th General Hospital embarked from Fort Devens to North Wales. In North Wales, Gertrude finally neared the front lines of the war, but she received no experience on the battlefront. Gertrude continued to travel around the continent for the ANC. She went to England, Normandy, and Paris. In 1945, Gertrude found herself residing in a seventeenth century castle in Liege, Belgium. The castle had electricity and fully functioning facilities, but nonetheless was probably quite an unusual living experience for Gertrude. Perhaps Gertrude felt isolated in this castle so far from home, but she enjoyed hearing from her town. According to the Cochituate Jeep, Gertrude received a package at Christmastime from her friend Bennie Johnson and enjoyed catching up on the latest edition of Jeep. During Gertrude’s time in Belgium, one of the biggest challenges was setting up mobile hospitals. It could take between twelve and twenty-four hours to construct each hospital. Later that year, Gertrude was able to take a few days leave in Brussels. It probably was not as comforting as visiting home, but was surely a nice break from serving in the ANC.

Sadly, it was Gertrude's work mending others that put her in the hospital. Gertrude worked in tent hospitals, and Belgium's cold weather resulted in a nerve condition in her right arm. Gertrude's shoulder pain brought her to Reims, France in July of 1945, where she received treatment for the injury. Although Gertrude was eager to return to her unit, time to physically heal was very much needed after her tireless labors. The work that the 16th General Hospital did was difficult, and as a result, well recognized. They had one of the highest ratings of the WWII hospitals, and many Generals officially commended them for their work during the Battle of the Bulge. Gertrude’s eighteen months overseas earned her three stripes as well as a shoulder patch from the European S.O.S. Gertrude even received three combat stars for Normandy, Rhineland, and Ardennes. Two months after arriving in Reims, Gertrude returned to the United States because of her shoulder. It was also at this time that Gertrude was made a First Lieutenant of the Army Nurse Corps. Gertrude received treatment in the Halloran General Hospital on Staten Island, New York and eventually was sent to the Lovell General Hospital at Fort Devens. By October of that year, Gertrude had moved again, this time to Mason General Hospital in Brentwood. The end of the war was likely a relief to Gertrude, who explained how desperate she was to return home in an edition of The Cochituate Jeep. In the following months, Gertrude visited home often. She also visited her brother James in Springfield. Finally, on the thirtieth of June in 1946, Gertrude was discharged from service. It is likely that after Gertrude was discharged, she returned to regular hospital work. She was once quoted by The Cochituate Jeep as saying that she hoped to work in hospitals again after her ANC service. Gertrude's career as a nurse contributed to more than just the success of the United States in World War II. Her service was an integral part of a movement to change working standards for women in society, as well as the nursing industry as a whole. By the end of the war, women who had served as nurses were receiving commissions, retirement privileges, dependent allowances, and equal pay.
​
Gertrude died on May 13th, 1995, fifty years after returning from the war. At the time, she was living in Dudley, Massachusetts. It was likely that Gertrude had retired years earlier.