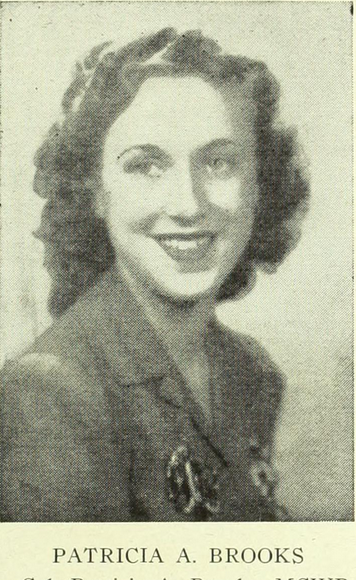 Patricia Brooks’ war experience represents the “We Can Do It” mindset that women adopted in America during the war. As the first woman from Cochituate to join the United States Marine Corps Women's Reserve (USMCWR), Patricia showed her family, friends, and the town the power that women can have to help stop the Axis powers.

Patricia Brooks was born to William and Ruth Brooks on October 15th, 1925. Her family lived in Brattleboro, Vermont, a mill town with a population just under 10,000. Her father was a mechanic, making $1500 dollars a year, which at the time was enough for the family to live their lives happily. The Brooks spent over 10 years in the small town, where Patricia started her education in elementary school. However, for reasons unknown, the family packed their things and moved south to Wayland, Massachusetts. The family moved into a humble home at 100 Fairfield Road where Patricia, an honor roll student, finished part of her high school education at Wayland High. Patricia wanted to do more, so on March 22nd, 1945, she enlisted in the United States Marine Corps.

World War II wasn't the first conflict that called upon women to serve. During what was then known as “The Great War” women were called to action to help the U.S. in WWI. Their efforts on the homefront helped drive the U.S. to victory. In 1918, nearly three million new female workers were employed in food, factories, and war industries, and out of these three major fields, the food industry was the most impacted by women. Thousands of women worked long, hard hours to help feed their nation, and more importantly, their brothers and husbands across the world. However, when WWI ended and the men came back, women were generally pushed back into the traditional domestic sphere of the home. But this would change on December 7th, 1941, when the Japanese attacked Pearl Harbor, killing over 2,000 innocent Americans. This marked the start of World War II for the United States, and with this, millions of men, young and old, left their homes for war, once again forcing their wives and sisters back into the working world. The “We Can Do It” poster created by J. Howard Miller to help boost the morale and enthusiasm urged on potential female workers. Although it may seem that this poster was a catalyst for women joining the workforce, it was rarely seen or spoken of and looms larger in our memory as a powerful representation of the changes. What matters more than the picture is the slogan, which embodied the feelings that many women had. These women were working to help their husbands, brothers, and sons win the war and come back alive, so many of these women felt like they were a part of the war, but even more than that, helping win it.

In Cochituate, there had been many men before Patricia too enlist in the United States Marine Corps (USMC). But when Patricia enrolled, she became the first women from Wayland to do so. Her enrollment was near the end of the war, only half a year before the official surrender of the Japanese. For part of this time, Patricia trained at Camp Lejeune, where thousands of Marines prepared for deployment overseas and the largest Marine training base on the East Coast. The Camp gave training to all recruits during the war, including white men, women, as well as African-Americans. Patricia learned many things about Marine life, including learning how to use some of the deadliest weapons. Patricia wrote to the Cochituate Jeep saying, “They showed us bazookas, flame throwers, and all types of guns. Also a demolition squad in action. Let me tell you that T.N.T. packs a terrific wallop.” Shortly after her training at Camp Lejeune, Patricia was permanently assigned at Cherry Point in North Carolina where she continued her training and climbed in the Marine Corps rankings. An astute Marine, Patricia was destined to jump in rankings. She started off as a Private, and no more than a few months later upgraded to a Private First Class, and finally left the Marines as a Corporal. This made her home town of Wayland very proud. The Cochituate Jeep reported,“We're proud to say you have the distinction of being the first of town to join this outfit." This quote shows how the town was supportive of Patricia’s enrollment and success in the Marine Corps Women’s Reserve.

After the war, Patricia returned home back to Massachusetts where she married a man named August Fonseca in 1948. August was a first generation immigrant whose father and mother had immigrated from Portugal. It is very likely that the two of them met during their time in the war, as August also served during WWII. She moved to his home town of Taunton, Massachusetts, where August and his two siblings worked for the same business that his father, a bakery named “Ideal Baking.” Patricia and August settled into a house on 132 Winthrop Street, where they raised a son named Mark Stephen Fonseca. The family lived in this home for many years until Mark married a woman named Mary Susan Schmidt, and the couple soon moved to North Carolina. Eventually Patricia and August moved to North Carolina to settle down with Mark and his family at 107 Live Oak Street on Emerald Isle.

Patricia Brooks died on January 25th, 2005, in Beaufort Carteret County, NC. She is buried at Coastal Carolina State Veterans Cemetery. It is likely that she moved to North Carolina to live with her son as she reached old age, and would explain why she is buried there.

Patricia lived her life embodying the “We Can Do It” women's movement of the 1940s that helped push America through WWII and is why she deserves to be remembered with honor, and not sidelined because she was a woman in a time of men.