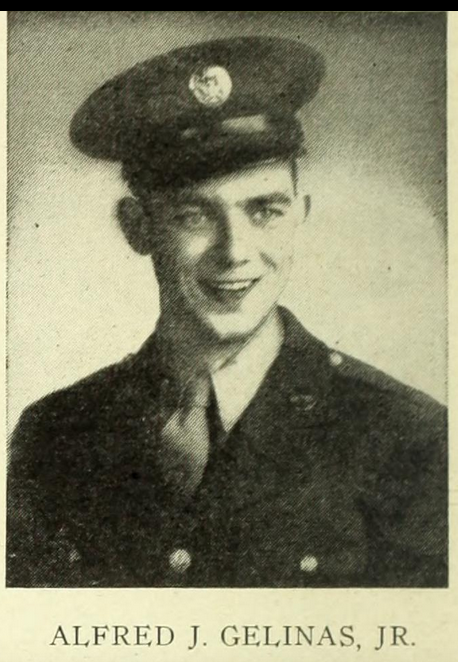 A member of the Wayland community and part of the “Greatest Generation,” Alfred J. Gelinas Jr. contributed not only to the Wayland, but to America as a whole through his ultimate sacrifice during the most horrific war in world history. Alfred’s story is one that is similar in scope to other American veteran stories. Although Alfred’s tour in North Africa, Sicily, and Italy was cut short, Alfred’s story shows how  an ordinary kid fought and died for a better day in America. A working class American himself, Alfred fought in World War II to preserve America’s freedoms to ensure that all Americans would live a sustainable life after the war.

The America that Alfred experienced, in the 1920’s and 30’s was far different than 21st century America. Alfred experienced a brief moment of prosperity as he was growing up. America was just coming out of World War I, sanctioning Germany by signing the Treaty of Versailles on January 21, 1920, forcing Germany to pay reparations from the first World War. America was in another era of “Good Feelings” known as the Roaring Twenties, an uprising of new popular culture and clothing that appealed to the American people. New styles of dance and music were formed in this era, such as the Harlem Renaissance and the Jazz Age, promoted a new sense of American identity and mass consumerism that boosted the American economy.

Alfred was raised by two loving parents when he was born on December 10, 1922. His mother, Dorothy Gelinas, ran her own knitting and garden clubs within the Wayland community, so Alfred’s mother was very active in town. Alfred’s father, Alfred J. Gelinas Sr., on the other hand, served as a major influence in the life of young Alfred. Alfred Sr. registered for the United States Army on February 1, 1942, one year before young Alfred chose to represent his country in the fight against the Axis powers of Germany and Italy. Alfred Jr. was most likely influenced by his father in many facets, not just because he enlisted in the Army, but because of the values that his father passed on to him.

Alfred was born right after the Progressive Era in the late 1910's to early 1920’s. It is likely that at an early age, Alfred Jr. had some sort of awareness of the presidents that led America over the course of the 1920’s, such as Warren G. Harding (1921-1923) and Calvin Coolidge (1923-1929) because they both did relatively well in keeping the country moving forward (although in Harding's case, scandalously). As Alfred grew up, he began to interact with the other boys that lived near 40 Pemberton Road, his residence. In addition to hanging out with his brother, Richard P. Gelinas, boys such as Herbert T. and Charles F. Tufts, aged 8 and 5 in 1930, respectively, were most likely Alfred’s neighborhood pals that he played with. From creating things from the resources they could find along the shores of Dudley Pond, to honing in their craftsmanship skills by creating their own slingshots and other mechanisms, Alfred and his friends were living the classic American boyhood life by building friendships with one another and creating things that seen as fun.

When Alfred Jr. was only six in 1929, America was beginning to slip into its worst economic recessions of its time: the Great Depression. The Great Depression’s main catalyst was the stock markets because when more and more people invested in the stocks, people would take loans out of the bank. When people took loans out of the banks, they would often pay back their loans years later. Millions of Americans had a buy now, pay later mentality at the time. This resulted in the banks to close because they simply did not have enough money. During FDR's emergency "Bank Holiday", the Gelinas family was unable to withdraw deposits in order to provide for their loved ones. Alfred Jr. and his family must have struggled to get enough food on the table and to pay the bills because in 1933, there was a 25% unemployment rate across the entire country. Houses and farms during this era were wiped away because people weren’t able to pay their mortgages.

The election of 1932 was a pivotal election for the struggling working class family trying to make ends meet, like the Gelinas family. In 1932, Franklin Delano Roosevelt (FDR) was elected as President in a landslide victory against incumbent Herbert Hoover. The everyday American family, like the Gelinases, was looking for a change that would allow them to have food on the table each and every day, to get a good education, and a good paying job in the American workforce. When FDR became president, Alfred was just beginning his post-elementary education in Cochituate, so he was starting to gain a basic understanding as to why America’s economic collapse was occurring. In 1933, FDR started a historic program known as the New Deal, which was a jump starter of opportunities and jobs for the American worker. Initiatives, such as the Tennessee Valley Authority and the Civilian Conservation Corps, offered thousands of jobs to the American worker that was struggling to make ends meet. For Alfred, the Works Progress Administration (WPA), had the most direct impact on his life because when the WPA was initiated, one of the projects the WPA worked on was building a new high school in Wayland. For Alfred, more enhanced, educational opportunities would arise to him when he became a high schooler, for the records show that he got on the Honor Roll as one of the best students in his class.

On December 7, 1941, three days before Alfred’s 19th birthday, America experienced the worst attack of its time: the mass destruction of Honolulu, Hawaii’s Pearl Harbor. The attacks on Pearl Harbor would change the life of young Alfred, his outlook on the world, and what his country’s future would hold. It is probable that Alfred Jr. talked to his father, Alfred Sr., to discuss what occurred at Pearl Harbor. The lives of American men would be completely changed. Thousands of men were called up by the draft and military personnel to combat the destructive forces of Japan and other Axis powers. For Alfred’s father, he registered for in the army in 1941, one year before Alfred Jr. did. Like Alfred Jr. Alfred’s father later died on January 23, 1959.

On February 1, 1943, Alfred’s dreams of what war would be like would come to reality when he enlisted in the United States Army. Alfred began his training at Fort Devens, right in his backyard in Middlesex County. Fort Devens was a starting point for Alfred’s basic training until he began some of the most strenuous training he could get at Fort McClellan in Alabama. During World War II, Fort McClellan was considered one of the biggest army training centers in the country, where half a million trainees prepared for the biggest fights of their lives. Excruciating training in one of the hottest areas of the country during the early spring and summer built Alfred’s endurance which would allow him to fight against America’s enemies. After Alfred’s training in Alabama, Alfred shipped out to North Africa, Sicily, and Italy. In North Africa, Alfred may have very well encountered North Africans that were commanded by Vichy French operatives who were loyal to the Nazis because France was under total control by Germany. From June 10, 1942 to May 13, 1943, the North African campaign began for the allies. Battling in Algeria, Libya, Egypt, and Morocco, Alfred most likely saw battle during the later parts of the campaign before he and his regiment invaded Sicily and Italy. Heavy artillery was most likely shot at Alfred and some of his closest friends in his regiment. Guns firing up in the air as the dust continued to blow in the hot deserts of North Africa. Alfred Jr. also experienced the Allied invasion of Sicily from July 7 to August 17, 1943. For Alfred and his other soldiers, Sicily was a major victory for the Allied powers because not only did capturing Sicily lead to further advancement in the region of Italy, but it also pushed back German forces further north, allowing for more direct contact between the Allied powers and Italy. While gaining military power in the world, the American forces would struggle severely against a powerhouse duo of Germany and Italy. At the Battle of Anzio from January 22, 1944 to June 5, 1944, Alfred’s life would come to a tragic halt. After one year and twelve days, Alfred was killed in action. On February 22, 1944, one month after the Battle of Anzio began, Alfred Jr. died at 22 years of age. During Alfred’s final moments, he was most likely thinking about his father, his most influential figure in his life who promoted patriotic values that enabled him to join the fight to protect his country and his loved ones.
​
After Alfred died, his mother Dorothy received the Presidential Citation and the Purple Heart, two awards acknowledging Alfred's ultimate sacrifice. Alfred’s fight in World War II is often associated with the Americans’ fight for the American Dream. Americans during the 1930’s and 40’s were fighting for protection and freedom. Alfred's efforts on the front lines in North Africa, Italy, and Sicily is a sacrifice that allowed millions of Americans to live out their lives without the threat of terror and brutality that the fascist nations attempted to impose worldwide.

Written by Will Gardner