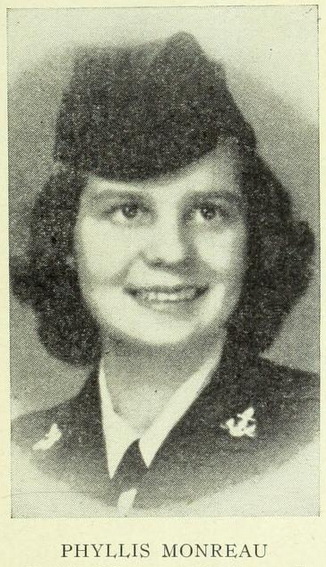 Women played major roles in World War II, whether they became the breadwinners of the house or participating directly in the war. In the small town of Wayland, women that actively participated in the war was scarce, but present. In 1924, one such woman was born: Phyllis Monreau.

Phyllis was born to Ethel and George Monreau. She had a sister, Regina, and a brother, George J. She was born at a time when America was thriving, the Roaring Twenties. From April through September of 1924, the first successful flight around the world took place, and in November, Macy's held it first Thanksgiving Parade. However, for Phyllis, and women in America, the recent ratification of the 19th Amendment meant it was time for women to gain societal acceptance they never had before. Women could finally express themselves by being able to vote. In addition to being able to vote, women were given the opportunity to use innovative, new technology freed many from having to spend entire days doing housework.

In fact, Phyllis’ father, George, worked in the auto industry, and was most likely earning a decent amount for his family. As the 20's dramatically ended with the stock market crash, the Great Depression, the core theme of the following decade, commenced. Surely things in the Monreau household changed, like they did for so many families. Eventually, as a young woman after the Pearl Harbor attack, she enlisted in the Navy. Phyllis kept stable connections with her family when she enlisted in World War II. Her brother, George, may have influenced her decision to join the war because he had joined the US Navy on November 22, 1942, one year before young Phyllis did. He most likely sent postcards to his family, and the stories he shared motivated Phyllis to follow in her brother’s footsteps.

On March 6, 1943, Phyllis enlisted in WAVES as an A/S, or Apprentice Seaman. WAVES, or Women Accepted for Volunteer Emergency Service, was a unit of the U.S. Naval Reserve in WWII. While the unit was a good opportunity for women to take part in the war, even though more men were going into combat, some received backlash from civilians and soldiers. Helping her country was more important, and the Navy itself encouraged and depicted women as honorable, feminine, and patriotic, so Phyllis also received support for her choice. As part of her training, she enrolled in Smith College. Different from the men, obtaining a higher education for WAVES recruits was like a “rite of passage into adulthood”. In addition to training, Phyllis had worked as a teletype operator in a brokerage office before enlistment, which likely led Phyllis to her assignment as a teletype operator stationed in the DeLand, Florida Naval Air Station.

On July 7th, 1944, Phyllis married Mack Bankston, a radioman in a bomber, in Florida. They most likely met during her Florida deployment. While Phyllis was busy receiving teletypes, Mack was busy operating the radio. Who knows, perhaps their similar communications work may have brought them together.

The next year, Phyllis encountered several fortunate events. On February 10, 1945, Phyllis was honorably discharged, and on August 24th, was chosen as one of the lucky winners for war bonds. In addition to receiving war bonds on September 23rd, she sighed a breath of relief after receiving news of her husband’s safe arrival in Boston.

After the war, Phyllis and Mack decided to stay in Florida and leave her family in Wayland, but we know that her mother and brother visited her in her new post-war life, driving all the way from Wayland. They had one son, and led a decent life in Melbourne, but sadly, their betrothal was short-lived and ultimately unhappy, leading to divorce in 1946.

Not much is known about Phyllis after her divorce, but we do know that she remarried and became Mrs. Phyllis M. Campbell, and lived in Everett, Massachusetts in 1951. Living through the war physically and mentally was no small feat, and as a woman, while more women participated, they still received some criticism. Phyllis was able to transcend the boundaries set for women, and while she was but one woman from a small town, she was an important part of the war and a role model for other women.