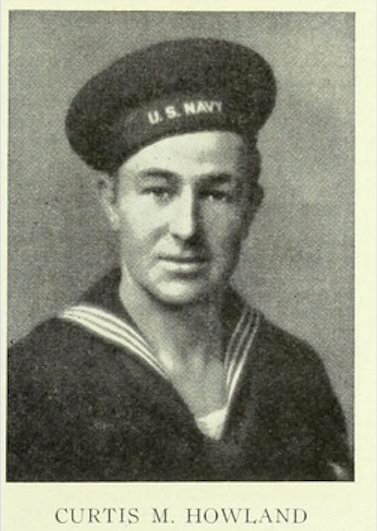 “The Greatest Generation" is how we often refer to the American World War II veterans, the men and women who fought for a greater cause: to rid the world of fascism and put an end to the persecution of millions of innocent people. When we consider the veterans who helped win the war, the first people that come to mind are the soldiers who fought in the front lines of battles across Europe, North Africa, and Asia. But there were others who put their lives on the line, occasionally directly fighting the Axis Powers, but more often than not working tirelessly to build naval bases and rebuild damaged battleships. These were the men and women of the Construction Battalions, nicknamed the “Seabees.” One soldier who fell into this category was Curtis M. Howland, a man who lived in Wayland for more than half a century. What is written here is a biography of his life, a tribute to his memory, and an effort to ensure that the contributions of a single man to his country is recalled.

Curtis was born on January 7, 1916, right in the middle of World War I. This is the same year that Woodrow Wilson, the president who guided America through the first world war, was re-elected into office. This was also the end of the Progressive Era, and the nation was rapidly industrializing, which would bring in a prosperous decade known as the Roaring Twenties. It would also cause the eventual economic downfall of the nation in the 1930s. This shift in the economy would dominate Curtis’ childhood. As for the effect of the war on his family life, his father, Melbourne Howland, was not drafted to fight overseas. He continued to work in the shoe industry. His mother, Eunice Howland, stayed at home to care for what would be the second of twelve children. The Howlands lived in Ashland, Massachusetts during the early years of Curtis’ life. However, Curtis attended the Framingham public schools for his education, so it is possible that the Howlands moved from Ashland to Framingham by the early twenties.

Children who grew up during the 1920s were expected to be independent and keep themselves amused. Curtis had two siblings, an older brother Thomas, and a younger sister Ruth, who were very close to him in age. Although he surely played with the six younger siblings as well, the three oldest Howland offspring were probably together the most in their playful endeavors. Curtis was known for enjoying the outdoors later in his life, so he may have spent a lot of his time as a child doing outdoor activities such as fishing, making and flying kites, or using slingshots. Little did he know the innovation and cleverness he used to entertain himself as a child would one day impact his time during World War II.

By 1930, Curtis’ father was working as a mechanic for R.H. Long Motors Company. His youngest brother Robert had just been born, the ninth addition to the family after Edith, Arthur, Eva, George, and Raymond Howland were born earlier in the twenties. Within a few years, Lillian and Albert Howland were then born into the family. Curtis quit high school after completing ninth grade. The Howland family moved to Natick for a few years, and at some point during the thirties, Curtis began working at the Dennison Manufacturing Company along with three of his brothers. In 1939, on his twenty-third birthday, he married nineteen-year-old Helen Matilda Tufts in Wayland, Massachusetts, where she lived at the time. The couple settled down on 44 Hawthorne Street in Cochituate. A few months later, Curtis was assigned to work with the Works Projects Administration, part of the New Deal that President Roosevelt put into action to raise America out of the Great Depression. The program gave hundreds of thousands of jobs to citizens in an effort to rebuild the infrastructure of the country. Curtis worked as a laborer for fifty-two weeks that year.

As war loomed on the horizon, the Selective Training and Service Act of 1940 would have forced Curtis and Thomas to register for the draft because they were both over the age of twenty-one. Melbourne Howland was older than forty-five years old and therefore did not have to register, but he submitted a draft card along with his sons. The sixteenth of August of that year marked the beginning of Curtis’ family life when his first daughter, Jeanne Ellen Howland, was born. At that point, the couple was living in what Curtis considered his hometown, Framingham.

The bombing of Pearl Harbor on December 7, 1941, brought the U.S. into World War II. While Curtis was enjoying his first few years as a father and working at Hingham Shipyards, his brothers joined the army.  Arthur enlisted as a Sergeant in the ground unit of a bomber squadron in 1942, and George joined as first class Private about a year later. Curtis followed shortly after, enlisting as a third class shipfitter in a Construction Battalion on September 13, 1943. Construction Battalions were crews of tradesmen who used their various skill sets to help rebuild ships and structures as they were damaged in the war. They were known for being quite resourceful when they could not find the appropriate materials to do a job; the Seabees would use whatever they could get their hands on to finish rebuilding as quickly and efficiently as possible. Although which Construction Battalion Curtis belonged to is not known for sure, his travels match up closely with those of the 48th Battalion. He was sent to Camp Peary, Virginia, for boot camp. Once he completed training, he shipped out from Gulfport, Mississippi for the South Pacific on February 7, 1944. Curtis was stationed on the Russell Islands. At some point that year, the Howland family sent off another son to serve in the army; Raymond enlisted as a Private in the U.S. Signal Corps and Army Air Force. In 1945, Robert enlisted as an Apprentice Seamen in the Navy, becoming the fifth Howland to serve in the armed forces during World War II . Curtis continued journeying across the seas. He was sent to the Admiralty Islands, the Hebrides Islands, and Guam. In March, Curtis was placed on the honor roll and promoted to second class. The next month he was relocated to work on ships near the Mariana Islands after the Japanese surrendered there. While Curtis was there, he received correspondence from The Cochituate Jeep, which was Wayland’s war era paper. They sent him the latest edition of the paper and a war bond that he won in a raffle. Curtis would send a grateful letter to The Cochituate Jeep after the war was over. He would explain that he used the Jeep to connect with other men from Cochituate during the grueling days of work.

In June of the last year of the war, Helen Howland must have been a very happy woman when she received a phone call from her husband that said he was in California and on his way home. Once the formalities were taken care of, Curtis was officially discharged from the service on July 11, 1945. He had spent fifteen months in the Pacific working in a Construction Battalion and was awarded ribbons for his work in both the American and Asiatic Pacific Theaters.

Curtis arrived home and was immediately thrown into hectic family life. He and Helen ended up raising nine children: Maralyn and Jeanne (twins), Billy, David, Peggy, Ricky, Nancy, Bonnie, and Peter. Once he settled back into the domestic lifestyle, Curtis began raising various kinds of birds and hens, and made his living working for the Framingham-Natick Ice Company as a truck driver. Sadly, in 1956, his daughter Bonnie died as a teenager because of kidney failure. Tragedy would strike the Howland family again in 1998 when Jeanne died of breast cancer at only forty-eight years old. For many of the years that Curtis lived in Wayland, he was a Supervisor of Janitorial Services at Raytheon in Cambridge, retiring from that in 1981. After retiring, he became a bus driver for the Wayland Public School system. He was an active member of his community, serving in all offices of the Veterans of Foreign Wars for the town of Wayland, and in the American Legion as well. In his spare time, Curtis was known for playing the harmonica and enjoying the outdoors. He fished with his children often on the Lake Cochituate and Dudley Pond. He was also a skilled hunter with the bow and arrow.
​
Curtis lived in Cochituate for a total of sixty-three years. On November 14, 2009, he passed away at the ripe old age of ninety-three. He died at home with his family surrounding him. They buried Curtis at Lakeview Cemetery in Wayland, under the same gravestone as his daughters Louise and Jeanne. Four years later he was joined by his wife. An inscription on the bottom of Curtis’ gravestone reads: “A love that passeth all understanding.” Curtis is not here today to tell us about the trials and tribulations of a Seabee. Nor can he vouch for his loyalty to his country or love for his family and community. But his actions speak louder than the words he cannot utter. Curtis Howland was a son, husband, father, soldier, and Waylander that should always be remembered.