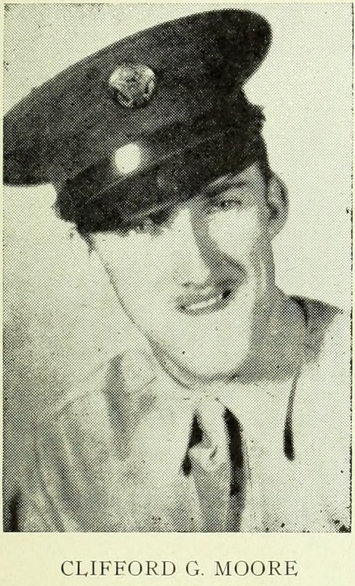 Clifford G. Moore was a son, a brother, and a soldier. However, he will only be remembered as one of the many soldiers who died in WWII. He, like countless others 75 years later, is a statistic, a number, not a story or a person, until now. While the adult life of Clifford G Moore was mostly dedicated to war, it is important to remember the human behind the soldier so that his sacrifice for his country and the future of democracy can truly be appreciated.

Clifford was born, in New Hampshire, in an era marked by economic depression which was initiated in 1929, ten years after Clifford’s birth. When the stock market crashed in October 29th, 1929, the consumer economy collapsed and the recession that was occurring turned into the Great Depression. The country struggled under the leadership of Herbert Hoover, as every sector of the economy was hit by the economic turmoil. The country’s collective struggle led to political upheaval and the election of President Franklin D. Roosevelt in 1932. Under his guidance, the economy began to slowly recover with New Deal programs such as the WPA and the CCC, and more enduring reforms like Social Security.

As Clifford grew up, the economy was slowly improving but the middle class was still struggling. As a middle-class man growing up in the 1930s, Clifford was not given the opportunity to attend higher education. Clifford moved to Massachusetts before he turned one. Some 15 years later, after completing only two years of high school, he joined the workforce as a cementer to help his parents support their family. Clifford had four siblings, two older sisters name Rose and Hazel and two younger brothers Robert and Norman. As a cementer and a citizen of Wayland, Clifford helped construct the Wayland - Weston aqueduct, to this day an important area public utility.

On December 10th, 1940, when Clifford was around 21, he enlisted in the Army Air Corps as an aerial photographer. After his enlistment Clifford was stationed at an airbase in Atlanta Georgia for ten months before traveling on the ship Matsonia leaving from Los Angeles and arriving in Honolulu, Hawaii on July 30th, 1941. In October of 1941, Clifford left Hawaii and traveled to the Philippines, where he was stationed at Nichols Field. He missed the Pearl Harbor attack by only a couple of months. If Clifford had not been stationed in the Philippines that month, he could have been killed along with the 2,335 other military personnel who lost their lives in the Japanese attack on the US naval base that prompted the United State’s direct involvement in WWII.

Clifford Moore was stationed in the Pacific front and fought the Japanese fascists tirelessly in the Philippines until he was captured by Japanese soldiers and imprisoned. On April 9, 1942, Japanese soldiers captured the Bataan Peninsula on the island of Luzon, a mass capture that resulted in around 75,000 Filipino and American troops being forced to make a grueling and torturous 65 mile march to the Japanese prison camps. Clifford endured what is now known as the Bataan Death March, an enervating march in intense heat, while concurrently undergoing torture and harsh treatment at the hand of the Japanese guards. Thousands of men perished in this slow march towards death. Clifford was one of those who survived; however, reaching his destination only condemned him to prolonged torture. He was placed at the Cabanatuan Camp which was previously a training camp for Japanese shoulders but converted to a camp that imprisoned thousands of Allied soldiers. This camp kept its prisoners in a state of utter squalor. The hospitals in the camp housed hundreds of prisoners that were infected with dysentery and malaria. The captured soldiers gave the camp the name “Zero Ward” because they believed that the probability of escaping the camp and returning home was zero. Their reasons for this belief was based on the fact that the camp was surrounded by an eight-foot-tall barbed wire fence, and at its peak held around 8,000 American soldiers.  The few captured soldiers that did leave the camp were shipped to other parts of the empire to serve as slaves in labor camps or factories, forced to work for the Japanese regime. Clifford, however, did not share this same fight. Instead of being shipped off and forced to work, on July 11, 1942, he died of tropical disease, surrounded by death and hopelessness. Clifford died absent the love and comforts of home.

Clifford was never able to return home to his family. His was never able to see the smiles on his sibling’s faces or feel the warm embrace of his loving mother. Clifford would die alone, in a strange, foreign country after surviving grueling and endless torture in the greatest war known to man. Clifford would never know that he received a citation of honor from Gen. Arnold AAC, posthumously or that even in death, he was never able to return home. He is buried in Fort William McKinley in the Philippines, a location that his family was unlikely to ever be able to visit. While Clifford was never able to return home, he still left behind a legacy. After his enlistment, his two younger brothers soon followed in his path to join the military. His brother Norman served in the military in the 29th division at Aachen, Germany. He was awarded the Presidential Citation Good Conduct Medal, as well as two campaign ribbons and one occupational ribbon. Clifford’s other brother Robert served in the military for three years and was awarded the Asiatic-Pacific ribbon as well as a Good Conduct Metal and a Combat Infantryman's badge. Robert was discharged from his service three months after his brother’s death.

Clifford G. Moore was one of the millions of people who lost their lives in the most devastating and costly war in history. He fought and died for his country on foreign land, and his sacrifice lived on only in the memory of his small family. However, by learning about Clifford’s past, students of history can gather a greater understanding of the effects that WWII had on individuals. By viewing history in this way, we can see the war not just as the killer of millions, but rather as the war that touched the lives of countless individuals across the world from the Philippines where Clifford died to our small town of Wayland where he lived.