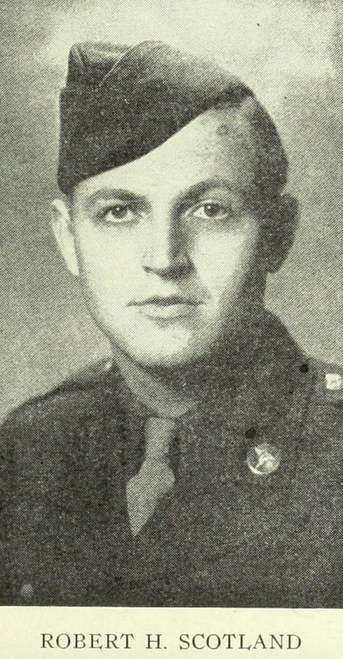 America’s “greatest generation” is often characterized by the men and women who lived in the early 20th century, throughout the time of World War II. This generation was known for their selfless acts of patriotism and defeating fascism. The generation prevailed in a time of economic depression and a World War. Robert H. Scotland was a member of this “greatest generation” and showed the very values that give them their name. Robert Scotland was a true patriot and public servant in every aspect of his life, and should be remembered as such.

Mr. Robert Howe Scotland was born on November 13th, 1919 to parents William and Hazel. He was the second of three subsequent brothers, two years older than Robert was Donald, and William Jr.  was three years younger. Bob, as he was commonly called, was born in Wayland, at the time of his birth, his family was living on Pemberton Road. In 1919, the United States was entering a time of prosperity for the middle class known as the Roaring 20s. Robert’s father, William J. Scotland worked as the office manager of a local printing company. Times were good for the Scotland family. With the three boys in their childhood years, the Scotlands soon moved to West Plain street, where Bob lived the rest of his time in Wayland. He and his brothers each attended the Cochituate School. After the period of economic stability of the 20s, the Great Depression set its grip around the US and Wayland. The Depression greatly affected Wayland and Robert saw firsthand how the town tried to boost the economy with the works of the WPA with the new 1935 Wayland High School, which completed construction during Bob’s sophomore year. Bob’s father, William, was not a worker on salary, and the records are unclear as to how the hard times impacted his livelihood. As a young adult Bob was probably expected to start providing for his family, as so many young men did at the time, but even with added pressure, Robert graduated in 1937. He then went on to pursue 3 years of college at Harvard University to pursue his love of history. Despite the difficult economic opportunities, Bob's family was never drastically affected by the hard times, for they never moved homes and the 1940 census reveals that William changed his occupation to a bus manager. The family persevered all while the three boys, still in school, lived at home along with Bob’s girlfriend, Virginia Normyle, a Washington DC native, and his brother, Donald’s, wife, Arlene. On May 1st, 1941, Bob and Virginia were married. After his college education, Bob entered the workforce and soon became a junior executive at the Aetna Insurance of Hartford, Connecticut, where he lived with his new wife, Virginia.

On December 7th, 1941 the United States was attacked by Japanese planes in the attack of Pearl Harbor and was subsequently dragged into the intensity of World War II. Everyone in the United States was greatly affected by the attack, and a surge of patriotism and camaraderie swept the citizens of the country. The early years of the United States' involvement in the war brought forth a time of great concern in the homefront; citizens were scared and tensions were running high with news coming every day of the growing threat of the Axis Powers. In the beginning of the 1940’s, the draft was in full effect and Bob, as a young man in his early 20’s must have been waiting for the day for his number to be pulled. That day came with a little time, it was not until June 2nd, 1943, when Bob was called into service, only a day after his little brother William Jr. The United States was currently entangled in both the European and Pacific Theaters, but morale was up in both the homefront and on the front lines, and Mussolini's fascist government in Italy was only a month away from falling. Bob was sent to Fort Devens and later assigned to Company F of the 343rd Medical Regiment at Fort Dix, New Jersey for both basic and medical training and finished his training at Madison Barracks in New York. Bob was appointed the rank of Private. Bob completed his training and on August 11th, 1944, he embarked from New York overseas into the European Theatre, only months after the successful D-Day invasion of Normandy. Bob, along with the rest of Company F, landed in Glasgow, Scotland and traveled through the United Kingdom to continue training near Reading, England. The Company stayed based in England until mid-September 1944, when they were transferred to France. During Bob’s time in the services, Virginia moved back to her home in DC, but often came back to Wayland to spend time with Bob’s parents.

After their voyage over the English Channel, according to the Cochituate Jeep, a war-time magazine published in Wayland for people on the homefront to get news of the war and the Waylanders participating, the Company “attached to the then secret 9th Army, elements of which were being assembled near Paris.” The 9th Army was a field Army that was activated only months before D-Day, the main objective of the Army after the invasion was to suppress the final German forces in Europe. Bob was soon transferred once again, this time using his medical background to serve as an ambulance driver in the 113th Mechanized Cavalry Battalion and the British 2nd Army in Holland. Holland was territory occupied by the Nazi’s until the end of the war, and Bob helped deal with the injuries on the front lines. In Holland, it was likely Bob was close to, if not in contact with his brother, William Jr., who was in the 512th Engineering Company building bridges and other river crossings in the area. Later, Bob “began evacuating casualties for the 82nd Airborne Division in Belgium two days after the Germans launched the Ardennes Offensive." Bob and his Company found themselves in one of the final Nazi campaigns, known as the Battle of the Bulge. Bob wrote in the Cochituate Jeep that “when he was in the Belgium ‘Bulge Battle’ with the famous 82nd Airborne Div. his Company received a written commendation from General Garvin, also the Presidential Citation.” After the intensity of the Nazi’s final true push at the Battle of the Bulge, the war was all but over, but Bob’s job was far from it. He soon parted ways with the 82nd Airborne and found himself evacuating the wounded of both the 7th and 5th Armored Divisions and the 35th Infantry Division in the United States’ continued invasion campaign of the Rhineland and Central Europe. This hard work of all Allied troops finally led to the inevitable German surrender in the late spring of 1945 where Bob had reached the Port of Lubeck at the Baltic Sea. He continued to describe his time in Germany when writing to the Jeep, saying that “the large cities have all been badly destroyed varying perhaps from 60% to 100% or total destruction." Bob offered helpful insights about the front lines of the war to the men and women back home who had nothing but the newsreels to keep them updated. After German surrender at the end of the war, he returned to the States on June 29th, 1945, back to Wayland to celebrate with his wife, friends, and family. In August 1945, Bob had to return to the services for the remainder of the summer. He was eventually discharged from the Army on November 13th, 1945 from Camp Swift, Texas, just outside of Austin. Bob served in the Army for just under two-and-a-half years. When discharged, Robert was awarded the Good Conduct Medal, European African-Middle Eastern Theatre ribbon with three battle stars, Victory Medal World War II, American Theater ribbon, the Allied Army medal, a War Bond winner, and was enrolled onto the Cochituate Jeep Honor Roll.

The War was over and American was celebrating. Bob was now fully reunited with his darling Victoria, and the couple started to resume their lives together. Bob resumed his job in Connecticut with the Aetna Insurance Company. For the next year he worked and lived in Hartford with Victoria, but he always felt drawn back to his home. Bob returned to Wayland, living right down the street from his parents. He soon found his first job teaching at Brookline High following his passion for history. The Wayland Town Crier noted that after a year at Brookline he applied to Wayland High School, and was accepted into the Social Studies Department. Bob spent the rest of his working career at Wayland High School, spending a total of 23 years teaching until he retired in 1979. The Wayland High School class of 1979 dedicated their yearbook, known as The Reflector, to Mr. Scotland who “has been the Social Studies Department head, a senior class advisor, and a tough, but always considerate and helpful history teacher." Throughout his time at Wayland High, Bob taught AP History for 16 years but his, “basic distinction, however, has been his love for teaching and a desire that real learning takes place in his class." Bob was known to use his own experiences from the war as well, he would often tell personal stories from his time spent in Europe in class to his students. Bob’s years of teaching left a large impact on his former students, so much so that “his dedication and understanding have many times prompted past students of his, in their 20’s or 30’s to write him." During all their time in Wayland together, Bob and Virginia never had any children. Along with teaching, he was very interested in both his own family's history, as well as local history. Bob deeply researched his own lineage and was also the Vice-President of the Wayland Historical Society, as he attempted to write a history of the town. In the twilight of Bob’s life, he and Virginia moved to a small town in New Hampshire called Canaan, where he passed away on May 15, 1999 at the age of 80. After his death, he was brought back to Wayland and now rests in Lakeview Cemetery on the banks of the Lake Cochituate, just steps from his former home and life.
​
Robert H. Scotland lived a truly full life and was a true public servant. Bob both fought fearlessly in the depths of the European Theater, and helped the wounded as an Army medic. In his years after the war, he continued to better those around him by teaching. He was a man who performed all things he did with passion, quality, and integrity. Robert H. Scotland was a true patriot and role model for all Americans to come.